VERIFY: Is 'Save the Children' march in Spokane connected to QAnon, other conspiracies?

Spokane is one of 100 cities participating in a "Save the Children" march on Saturday, organizers say. KREM set out to verify some of their claims. 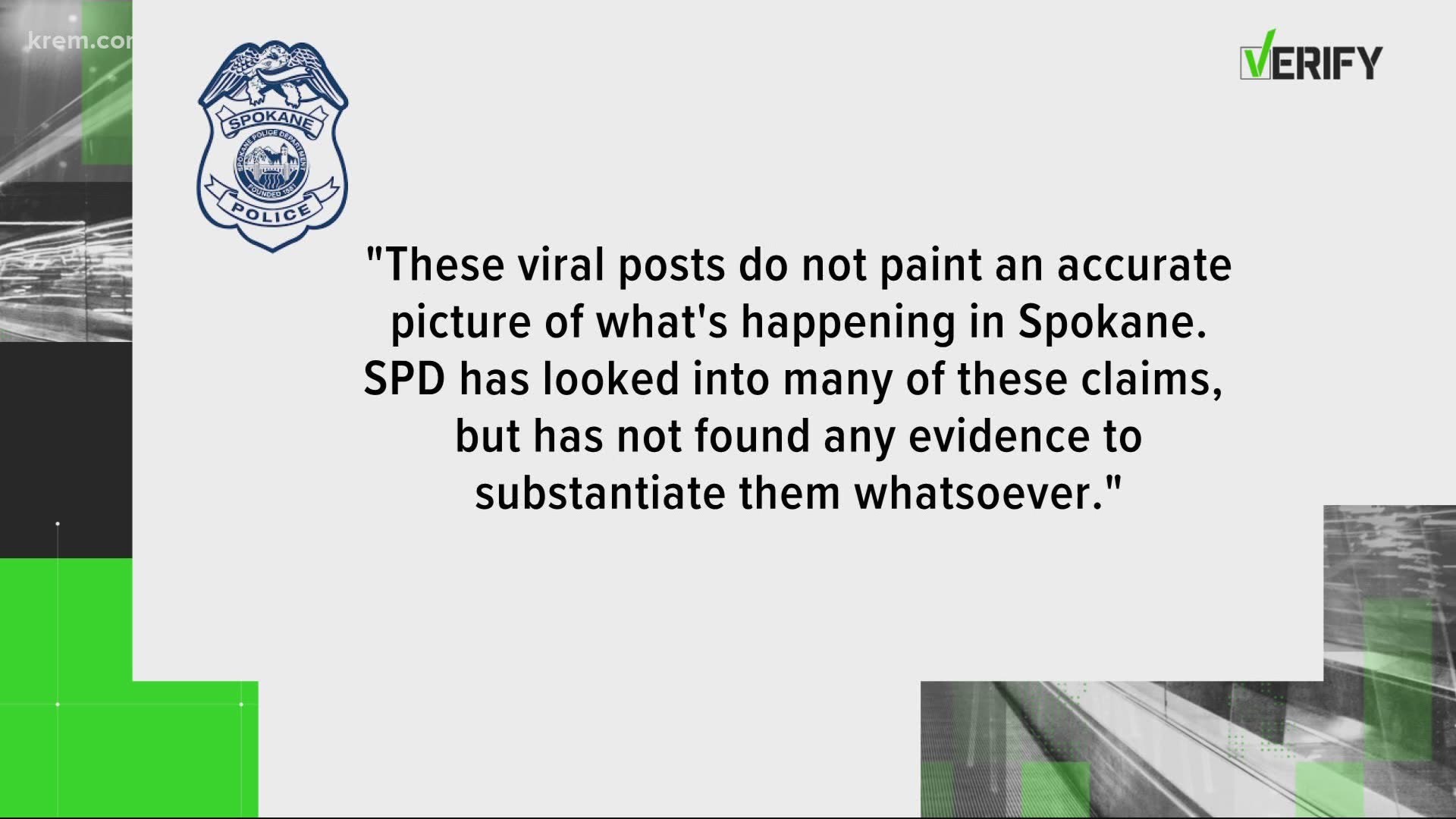 SPOKANE, Wash. — Social media has recently been flooded with posts containing #SaveTheChildren and #SaveOurChildren, with some people organizing or planning to participate in demonstrations against sex trafficking nationwide.

Organizers say Spokane is one of 100 cities participating in a "Save the Children" march on Saturday beginning at Riverfront Park. Almost 200 people have said they will attend the event on Facebook, with hundreds more interested.

The event's description says it is aimed at raising awareness about the "child sex trafficking crisis" and bringing "an end to pedophile rings."

Multiple national media outlets have connected similar rallies nationwide to a conspiracy theory known as QAnon. An article in Rolling Stone says the #SaveTheChildren hashtag has been "co-opted by conspiracy theorists of all stripes to propagate the notion than an internal cabal of elite pedophiles is secretly trafficking children."

According to Snopes, Facebook temporarily banned posts with the hashtag that violated community standards or showed depictions of child abuse. But the hashtag was not permanently banned from the social media platform.

The movement and rally in Spokane raises two main questions: How prevalent is sex trafficking in the local community and is this local rally connected to the conspiracy theories?

We spoke to one of the organizers of the march and Sgt. Terry Preuninger with the Spokane Police Department to verify.

Aspen Bowen, who is one of several organizers of Saturday's march in Spokane, said their main message is to raise awareness about child and human sex trafficking in the community.

“People aren’t aware of it happening in their own communities. They’re naïve to think that it wouldn’t happen to their own children," she said.

KREM reached out to The Jonah Project, a nonprofit in Spokane that supports victims of human trafficking, regarding the march and sex trafficking in the Spokane area.

"We will not be at the protest but thank you for reaching out. We are not politically driven," The Jonah Project wrote in a Facebook message to KREM on Friday, Aug. 21.

During KREM's conversation with Bowen, she also cited a statistic that she attributed to The Jonah Project's website: "One in four children are sex slaves." A search of the nonprofit's website did not turn up this information.

The United Nations Children's Fund (UNICEF), reported in July 2018 that just over one quarter of all people trafficked worldwide are children.

When KREM asked Bowen why she wanted to rally in support of an end to child sex trafficking now, amid claims about conspiracy theories, she said news surrounding the Jeffrey Epstein cases prompted her to look into the issue locally.

She said the march in Spokane is not affiliated with the QAnon conspiracy and that its organizers are not followers.

"Some of our supporters may be and that is their personal choice, but what we are raising awareness for is what is happening here in Spokane. We are not diving into the conspiracy theories part," she said.

Bowen also provided a list of goals from those involved in the march, including more legislation aimed at protecting victims of sexual crimes, specialized law enforcement task forces aimed at sex trafficking, and notifications about sex offenders moving into the community.

Terry Preuninger with SPD said many of the goals are related to legislation, which law enforcement is not involved in, but the police department is already tackling some of the requests.

SPD already has resources dedicated to human trafficking and prostitution through its Safe Streets Task Force, according to Preuninger.

Additionally, law enforcement provides notice to the public about registered sex offenders who move into Spokane or relocate within the city. The Spokane County Sheriff's Office has also created an online sex offender database.

Preuninger also discussed the issue of sex trafficking in the Spokane area. He said local trafficking is typically based on coercion through the use of drugs or violence.

Preuninger said police have "absolutely arrested people who have kidnapped kids in their cars" over the years, but this is very rare.

Preuinger also addressed viral posts circulating on social media in recent weeks. Some of them claim that kidnappers are using fliers on vehicles to lure children an teenage girls at busy shopping centers. He said police have not been able to find a single case where someone used a flier to abduct another person.

The urban legend, and others like it, can be traced back about 15 years, Preuninger said.

He also provided the following statement to KREM regarding the viral posts and the issue of sex trafficking:

“These viral posts do not paint an accurate picture of what's happening in Spokane. SPD has looked into many of these claims, but we have not found any evidence to substantiate them whatsoever.

There are isolated cases of trafficking in our community, but what we are NOT seeing is stranger-to-stranger abduction scenarios, where people are ripped off the street and sold into slavery.”

We can verify: Human trafficking is a real problem nationwide, including in Spokane. But viral posts that makes claims about local attempts are unsubstantiated.

We can also verify that many Save the Children rallies nationwide are connected with QAnon, but local organizers say the march in Spokane on Saturday is not.