Businesses are speaking out against armed militia downtown. Spokane police say it's legal, but Washington law is less clear. 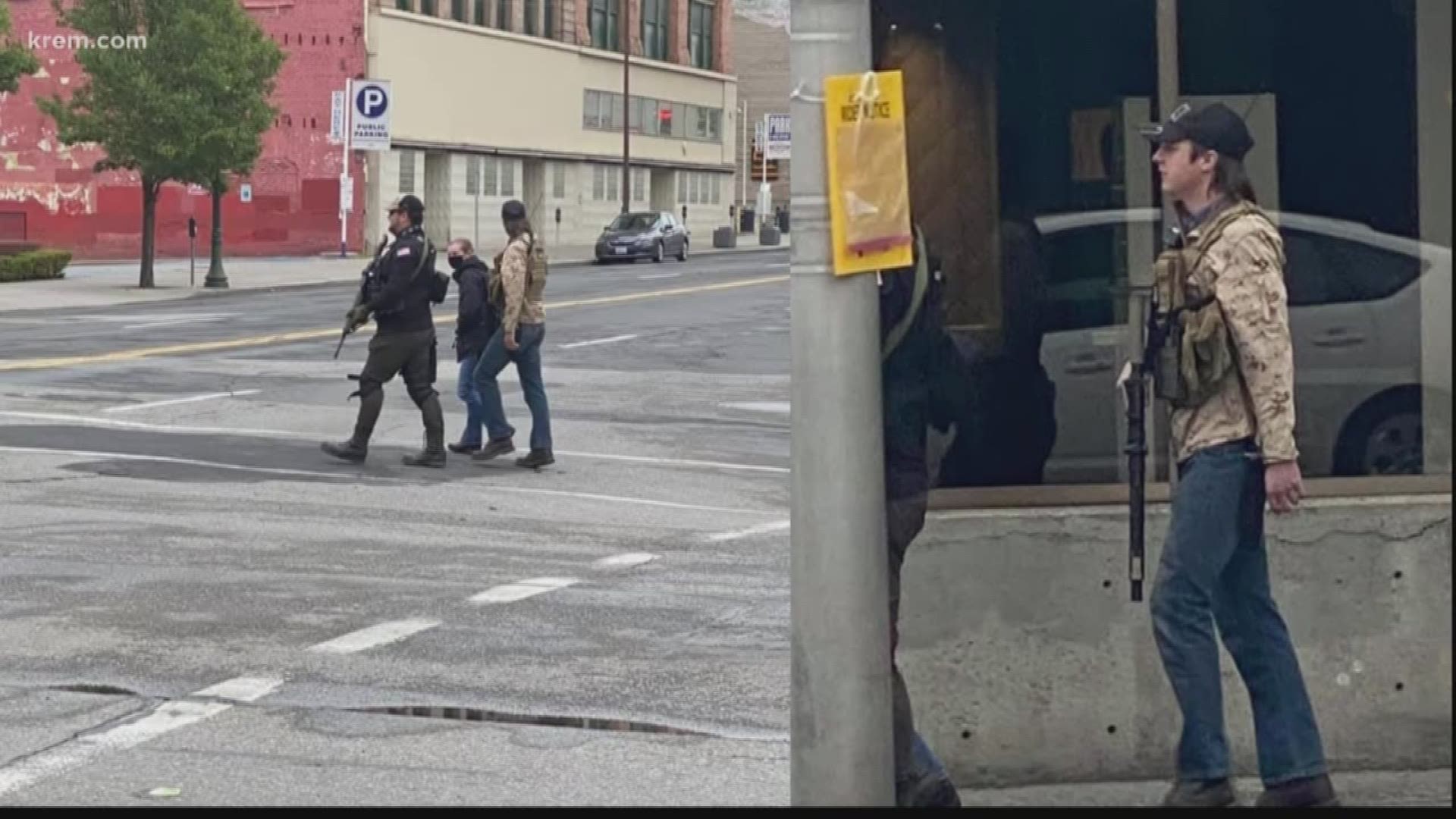 Spokane police say these people have not committed any crimes during protests, but Washington law is less clear about their rights to open carry.

John Waite, the owner of Auntie's Bookstore, says he plans to send a statement regarding business owners' feelings about the groups to the City of Spokane, Spokane Police Chief Craig Meidl, and Mayor Nadine Woodward.

A preliminary list of ideas posted to Waite's Facebook page says he and other business owners do not want armed militia in downtown Spokane, adding that they do not think “open carry of guns is conducive to running our businesses and dealing with the public and customers.”

Waite also wrote that he plans to ask the city to consider a ban on or the discouragement of open carrying downtown, and public condemnation of armed militia groups.

The post has been shared nearly 100 times, and has garnered hundreds of comments and reactions.

Spokane Police Sgt. Terry Preuninger said officers are aware of people who self-identified as militia members during protests, but that they did not commit any crimes. He added that these people left the downtown area once curfews were in place. 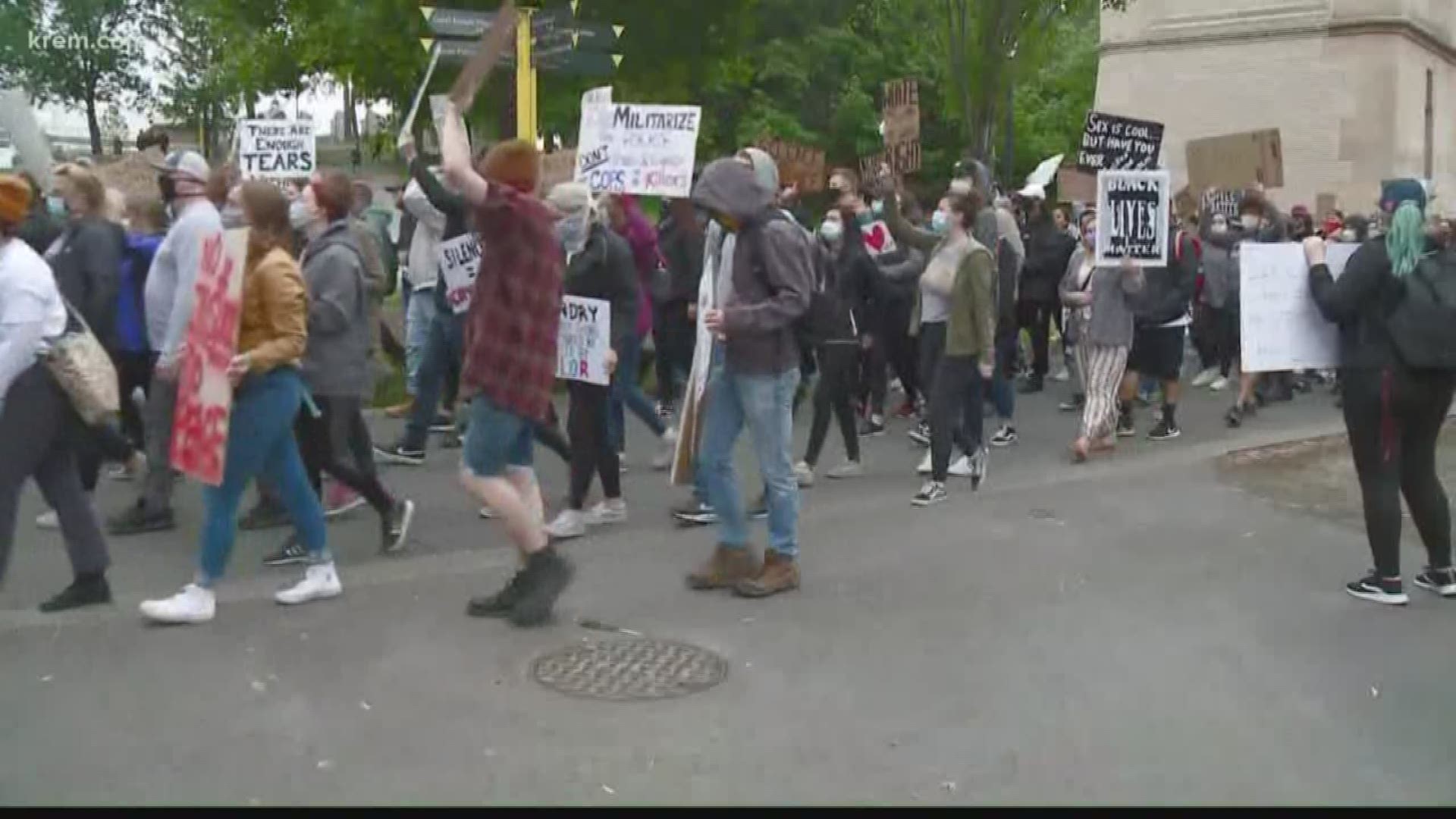 Washington law does not directly prohibit the open carrying of firearms, though there are some restrictions in place.

It is illegal for a person to display or carry a weapon "at a time and place that either manifests an intent to intimidate another or that warrants alarm for the safety of other persons." Those who do so will be guilty of a gross misdemeanor.

However, Spokane County Prosecutor Larry Haskell said his office rarely prosecutes this statute. He added it also difficult to prove, and the mere presence of a firearm is not enough to cite or prosecute.

Some of the militia members told officers that they were downtown to protect businesses, Preuninger said. The members' group affiliation remains unclear.

In an interview with KREM on Wednesday, Waite said downtown businesses have seen men armed with assault rifles walking around and "basically shutting down our neighborhood" during the last two weekends of protests.

“It hurts businesses to have these guys down here. I’m sorry if they think they’re helping, but they’re not," he said.

Waite also captured videos and photos of armed men patrolling the area, adding that there may have been up to 50 of them in the downtown area on Sunday night.

“I’m a gun owner. I understand their rights to have gun. Having a gun means you need to be responsible and smart about it," he added.

On Monday night, the Globe Bar and Kitchen also released a statement on social media distancing itself from a group of armed individuals that gathered in its parking lot during recent protests.

RELATED: Globe Bar and Kitchen in Spokane distances itself from armed group

"Two weekends in a row, an armed group of individuals has gathered in our parking lot and two weekends in a row," part of the statement reads. "We have reported their presence to local law enforcement. They have come in response to the powerful, peaceful protests that have taken place in downtown Spokane."

The statement goes on to claim that the business has video footage of "malicious intent to agitate, disrupt and intimidate" before stating the Globe is not affiliated with the armed group.

Armed citizens have also gathered at recent Black Lives Matter protests in downtown Coeur d'Alene, which has been met with both support and criticism from local businesses and residents.