KREM 2 learned that there were more than 6,000 untested kits total sitting in police evidence rooms across the country. 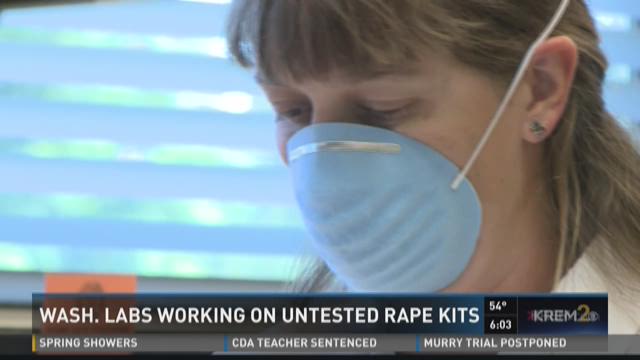 The new laws also give the Washington State Patrol Crime Lab $2.5 million to test some 1,500 old rape kits, which is about a quarter of the statewide backlog. KREM 2 learned that there were more than 6,000 untested kits total sitting in police evidence rooms. DNA evidence collected during rape exams can be the key to identifying rapists and sending them to prison

A month and a half later, a Spokane Police Sergeant is working to give new hope to local victim’s cold cases.

"I started talking to this guy, I went to the restroom, left my drink and 15 minutes later I barely remember anything," a woman said, who wished to remain anonymous.

She said that night proved to be the worst of her life. She said she believes the man she was talking to slipped a drug into her drink and sexually assaulted her. Her suspected attacker has never been caught.

Spokane Police Department Sergeant Mike McNab spends his days working to track down the rape suspects through his work at the Spokane Police Special Victims Unit.

"I really do think that this is the ultimate violation,” McNab said.

In Spokane, there are hundreds of untested kits dating back to 2005.

"In most cases they weren't submitted for valid reasons like consent cases where they know who did it,” WSP forensic scientist Lorraine Heath said. “You know, it's not a question whether sex occurred but whether it was consensual which DNA can't answer."

Police departments are now required to submit rape kit evidence for DNA testing within 30 days of collection. The idea is that casting a wider net will catch more rapists.

If a woman claims she was raped by a man but the man said it was consensual, there will be a disagreement. Under the new law, the kit could get tested and the suspect’s DNA could match one from previous rape cases.

"That data is going to be entered in a database and that same person may have done the same thing in a different state, in a different city and now we'll be able to link those cases," McNab said.

KREM 2’s Jane McCarthy submitted a public records request with Spokane Police and found they currently have 649 sexual assault kits sitting in evidence that have never been tested. However, with the law change, they just got a new grant to start testing older kits. They have been given the initial money to test 107. McNab now spends his days going through old cases to choose ones with the most promise.

Hundreds of rape kits now getting tested in Washington.&nbsp;

"I started working most recent and going backwards looking at each individual case seeing which one had the best merit, the most possibility of producing some sort of result if we were to get it tested," Washington State Representative Tina Orwall said.

There are five Washington State Patrol crime labs across the state including this one here in Cheney where scientists analyze DNA. In order to help deal with the influx of new and old rape kits the state has hired seven forensic scientists to get that DNA into a database.

It follows similar policies in Detroit and Houston where they have found they locate about 25 to 30 percent of serial rapists, which could now happen in Spokane.