Nine people are due in court Monday facing charges related to child rape. Four people appeared in court the week before on similar charges. 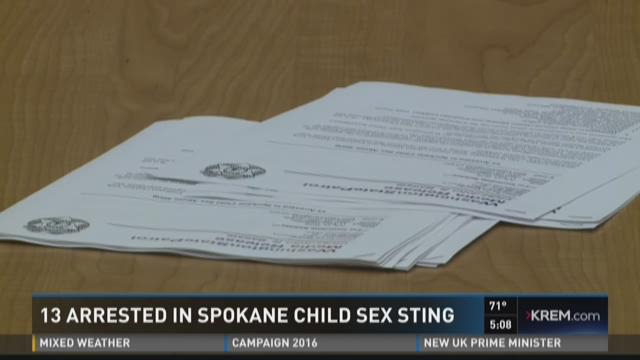 Nine people are due in court Monday facing charges related to child rape. Four people appeared in court the week before on similar charges.

After detectives posted an ad on Craigslist, they said they were inundated with responses.

Dahms texted "I love young and I don't care how young!!! I'd love to do anything!!!"

Throughout the text conversation, Detective Sgt. Carlos Rodriguez replied with statements like, "Not sure if this is for you. Unless you like young." I like young boys."

Those response are PG compared to the rest, so just imagine what these undercover detectives go through every day to catch predators.

“It's physically and mentally, it's hard, and often times I have people say, you know, I don't know how you could do this job, but, and I said that myself,” Rodriguez said.

Court documents said they were arrested as part of a five day sting called “Operation Net Nanny” that involved several state and federal law enforcement agencies. As part of the operation, an undercover officer posed as a mother offering her three children, ages 6, 11 and 12, to others for sex in a Craigslist ad.

Statewide, that ad lead to 40 arrests and 13 of those were in the Spokane area.

That was what one of the fake ads said posted on Craiglist by an undercover detective.

“In this case we used a number of different personas in different ways where we went out and we talked to people who wanted to do bad things to children,” Detective Sergeant Rodriguez said.

“People sometimes say we had 1,000 responses, but we only arrested 13 people, those are 13 people that can no longer hurt children in this community,” Rodriguez said.

In texts exchanged with suspects, detectives said, "My girls are 6 and 11. My son is almost 13."

“We're targeting people who have a sexual interest in being with kids and raping children, there's no other way to put it,” Rodriguez said.

"Operation Net Nanny" has been going statewide for about 20 days.

In that time, detectives have arrested 40 people, so on average that's two arrests per day. 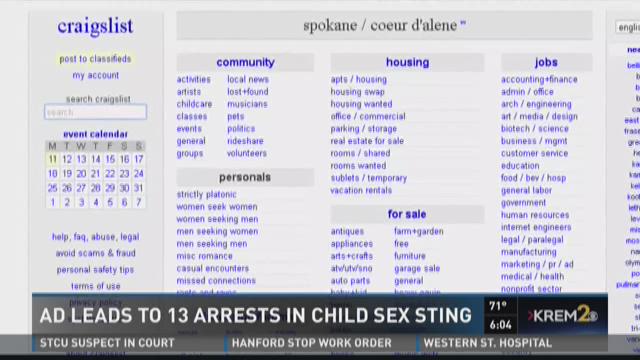 Of those 40 people only two were registered sex offenders. So, the majority of people were not even on their radar.

“Sadly we had way too many people wanting to do this type of activity and I don't' know what that says about our society right now,” Sheriff Ozzie Knezovich said.

Thankfully, when these people went to meet up with children, detectives were there instead. But unfortunately, that is not always the case.

“When I was a sex crimes detective, I had cases like this, I had parents that traded their daughter for a trailer,” Knezovich said.

Documents state that Tim was told the ages of the children and still agreed to meet up with the mother and her children. The couple was arrested on July 7 at a meet up location.

Officials also arrested Jason Lee Borseth on charges of Rape of a Child, Commercial Sexual Abuse of a Minor and Violation of the Uniform Controlled Substance Act. Court documents state Borseth had offered the mother drugs in exchange for sex with one of her children.

He was arrested on July 7 at the 7-Eleven off of Argonne and Bridgeport in Spokane.

Detective Sgt. Carlos Rodriguez said knowing he is protecting real children is what keeps him going.

“I've shown up and I've had to interview and listen to interviews when there is the 6-year-old, and there is the 11-year-old, when you have these children that have been affected and this, I mean I'm happy to meet these people I'm glad it's me. I'm glad it's not that little kid and that's the reward of why you need to keep doing something like this,” Rodriguez said.

This sting operation is still ongoing. Detectives are now working to determine if any of the people arrested came into contact with real children.

Rodriguez said they plan to do more operations like this in the future... but says resources are stretched thin.

“If it was up to me, I would do it every day, but the reality of it is we just can't do that because we do need to make sure that these cases are investigated the right way,” Rodriguez said.

Detectives also arrested Robert Dahms on July 7 at the 7-Eleven at Argonne and Liberty. Court documents said he agreed to meet up with the mom to have sex with the 11-year-old daughter. Officials said Dahms is a convicted felon in Idaho for having sex with a minor under the age of 16 and has a history of drug abuse.