'It's heartbreaking': Thousands of bees found dead in Spokane, pesticides may be to blame

Thousands of bees are dying around Spokane. People who live in Corbin Park believe pesticides are to blame. 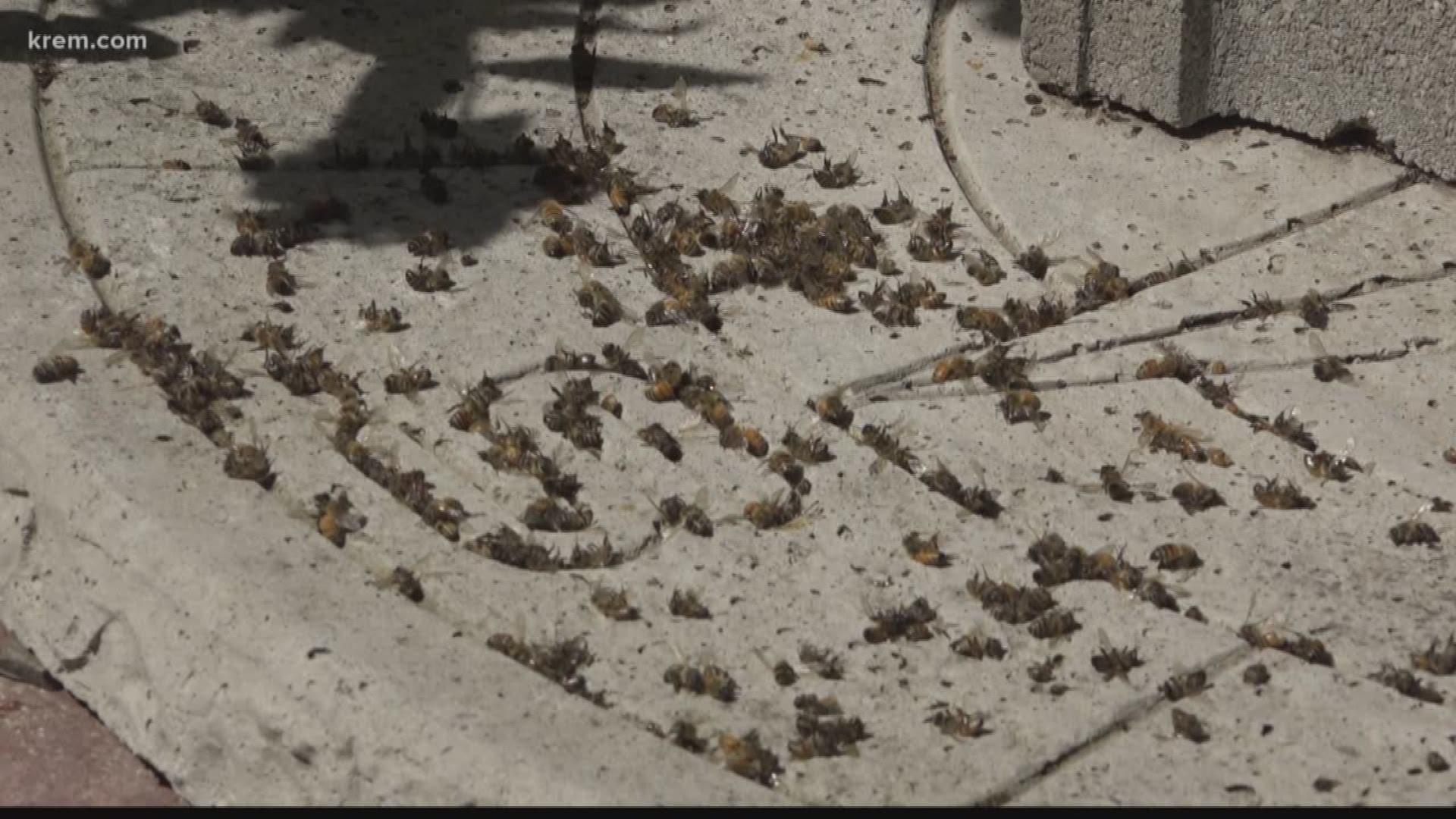 SPOKANE, Wash. — We're used to seeing bees buzzing around Spokane but one neighborhood is seeing something different.

People living in the Corbin Park neighborhood are finding dead bees all over.

About a week ago, Teresa McGee, who is a "backyard beekeeper," noticed dead bees outside of their hives – and not just a few but thousands.

After talking to other beekeepers and people online in Spokane, it turned out she wasn't alone.

"Everything that they do is amazing, I mean, I don't even know how to explain some of it," said Emmilee Bolan, a backyard beekeeper.

Bees not only provide delicious honey, but also play a vital role in the world's produce supply. They also bring joy to local beekeepers, but as you can imagine, that feeling changed this week as people in Corbin Park found dead bees all over the ground and inside the hives.

"The whole bottom board was so covered with bees, the bees that were inside couldn't even get out the bottom. There had to be at least two thousand bees dead," McGee said.

It's normal to see a few, but not so many that McGee had to sweep them into a bucket.

"These were some, not all, of the bees that were on the stoop on Sunday when we checked the hive," she said.

And it's just not just her. Other beekeepers are seeing the same.

"To the side of my hive there was a pile of hundreds of dead bees, on top there were several that were crawling struggling to survive," Bolan said.

What could've cause so many to die in the middle of summer? Mites, or what's known as "colony collapse," are commonly to blame. However, that may not be what's to blame in this case, as these beekeepers suspect pesticides sprayed nearby are to blame.

"These bees went out and found a food source and came back and did their little wiggle dance and told the others where the food source was and so they all went to that bad place," McGee said.

Bolan has also seen the bees on sidewalks and grass around the neighborhood.

McGee doesn't think anyone would intentionally try to kill this many bees, but wishes people would be mindful of the impacts chemicals have on them.

"I feel bad for them because they are so social and they work so hard together and the more you learn about them the more you have respect for them," she said.

A closer look at the bees shows that their tongues are sticking out, which is a common indicator they've been poisoned. Most pesticides are harmful to bees, but if people choose to use them it's safer to apply it early in the morning or after dusk.

"It's heartbreaking, it made me feel physically ill, it made me want to cry," Bolan said.

Bee deaths have continued to rise over the last two decades from several factors, including the increased use of pesticides for lawn care. It's why local beekeepers want people to read the label before you spray.

RELATED: Last winter saw more honeybees die off than ever before, survey reveals

"They're the main pollinators for most of the crops we eat, that feed the animals that humans eat, and it's about care of the earth that we live in," Bolan said.

If you're interested in learning more about bees and how to care for them, Inland Empire Beekeepers Association offers several classes. You can learn more about how to get involved on their website.

RELATED: World's smallest McDonald's is just for the bees