PORTLAND, Ore. -- The Portland City Council on Thursday night unanimously passed an ordinance that will require landlords to pay for the moving costs of some tenants. 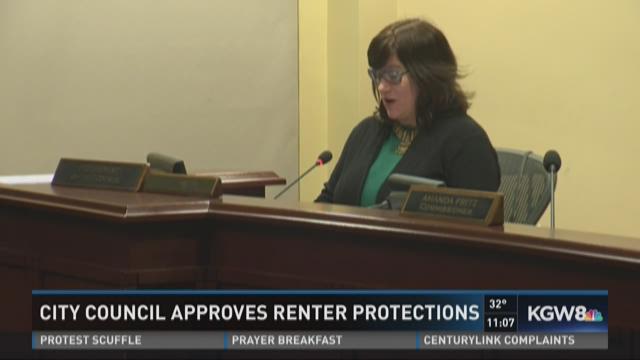 PORTLAND, Ore. -- The Portland City Council on Thursday night unanimously passed an ordinance that will require landlords to pay for the moving costs of some tenants.

More than 100 people signed up to testify in front of the city council on Thursday. Testimonies began in the afternoon and ended in the evening.

The “relocation assistance” ordinance mandates that if a landlord raises the rent on a tenant by more than 10 percent or evicts a tenant without cause, the tenant can then demand the landlord reimburse them for moving costs up to $4,500.

Actual amounts would vary, said city officials, depending on the rental property’s cost, size and neighborhood.

“We’re not talking about people who have for-cause evictions where they basically have stopped paying or they destroyed the home,” said Lynn Hager, an organizer with Portland Tenants United. “We’re talking about people who are just living there. Somebody goes and buys a building and then jacks up the rent 20 to 30 percent. They can’t afford to be there. This gives them protection.”

Attorneys with the group Multifamily Northwest, which represents landlords in the Portland area, said before the city council's vote that they would sue the city if the ordinance passes.

They called it vague and said the fee of $4,500 will bankrupt small landlords, who raise rents to keep up with rising property taxes and the cost of maintaining their properties.

“You can’t paint all landlords with the same brush, and I feel like the media thing… and the rhetoric around the city of Portland, we’ve been demonized as a class,” said Christopher Frick, a landlord of 20 years in Portland. “It’s not only unfair. It’s punitive, and it’s unproductive.”

Other landlords who spoke in front of the council Thursday complained that they were not consulted by the city to help draft the ordinance or come up with alternatives.

The measure will only be valid as long as the city remains under its official “housing emergency," which is set to expire in October.