Wendy Carroll, producer and founder of Out of the Shadows, was an actress who brought her son to auditions, rehearsals and performances. Carroll's son, Toby, has special needs and he inspired her to create the group when she noticed how much he wanted to be a part of what she was doing. 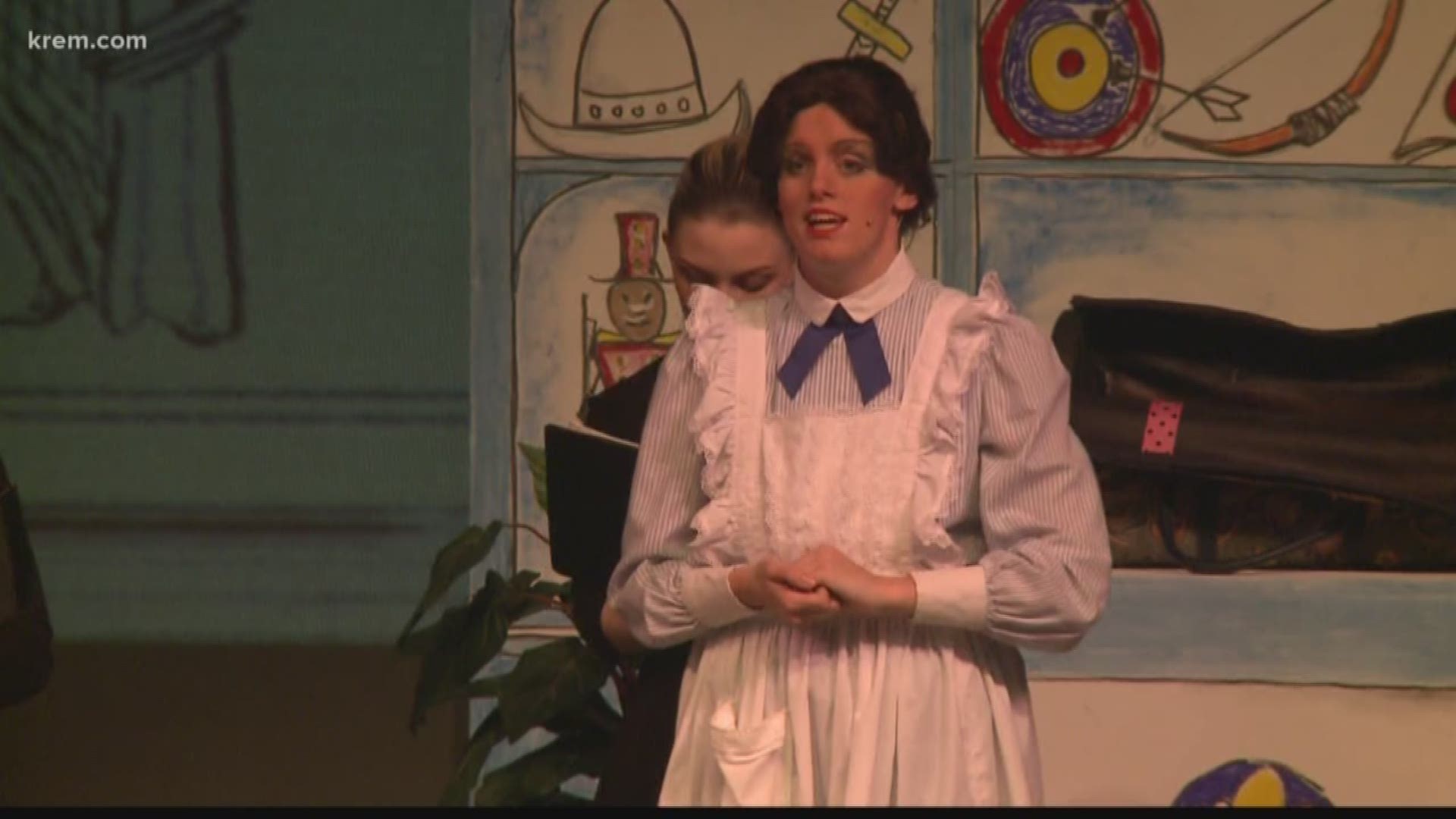 You could feel the anticipation growing in the Kroc Center in Coeur d’Alene as the crowds waited for a special group of actors to put on their version of Mary Poppins.

The was crowd filled with pleased parents, supportive siblings and gleeful grandparents. Many had flowers in hand to congratulate the actors after the play.

The set was simple. A projection in the background showed a scene of England from the early 1900s. A set for Mr. Banks’ office and an area for Bert’s chimney-sweep business.

It felt like the setup of your average play, but this one was even more remarkable because of the actors.

The play was done by the Out of the Shadows Theater group. They provide an outlet for adults with special needs, to bring them out of the shadows and into the spotlight.

The cast featured 29 actors, who were all accompanied by a shadow actor who offers support, prompting and encouragement on stage. When you watch the play, you barely notice the shadows because the actors shine so brightly.

From the beginning of the play, you could feel how excited the entire cast was and as an observer, you feel excited too. While they sang, they might not always be in sync or on perfect pitch, but after every song, the auditorium filled with applause.

The team who helped put the show together is filled with professional actors, directors, stage managers and many more.

The actors nailed all of their British accents and you could see how hard they worked to master their characters. They started rehearsing in late August at the Lutheran Academy of the Master church in Coeur d’Alene. They practiced three days a week for almost three hours a day.

Sadie Fisher, who played Mary Poppins, said she learned a how to play her character by watching other actors.

“I watch how others portray her and then I figure out how I would want to portray her. That’s how she comes to be really,” Fisher explained.

She said it wasn’t a stretch to play Mary because she’s a lot like her.

“I’m kind of a perfectionist so, I’m a lot like Mary, so like, everything has to be perfect,” Fisher said.

But Alec Steel, who portrayed George Banks, said playing his character was different for him because he’s not a grouch like Banks.

“I like to take on parts that are out of my comfort zone,” he said.

Steel is no stranger to the stage. He said he started acting when he was 7 years old but quit for a while. Then he got back into it in high school.

“It feels wonderful. I think the best part of theater is, you know, seeing the live faces in the audience, but hearing that clapping and cheering or even the laughter, and sniffles in certain scenes, I think that’s better than a pay check in my opinion,” Steele explained.

Logan Basta, who portrayed Bert, was like a young Dick Van Dyke on stage, dance moves and all. He said there was a lot of practicing for his role and his portrayal of Bert was about 50 percent himself and 50 percent from watching Van Dyke. Basta loved the fast-paced costume change he had before the song Jolly Holiday.

“The last few times were hard for me and Paul, my shadow,” he explained.

Basta said he was inspired to start acting because of his sister, Grace. She acted in plays at their high school. He and his sister are both in drama class at school. Grace was also in the play as a shadow actor.

The hard work and dedication shows in their work and many of the actors wish they could do this all the time.

"All of it was very fun and everybody did such a wonderful job. We loved it. But it was something I would do every day of the week," said Briana Greil, who portrayed Mrs. Bril, the Banks family cook.

At the end of the show, the cast received a standing ovation. Then, backstage all the actors were celebrating. The feeling back there was electric, and you could feel how proud all the actors were. They walked out to the lobby of the theater and were greeted with hugs and kisses from their loved ones. They told them, ‘You were amazing!’ and ‘I’m so proud of you!’

Credit: Riordan, Kaitlin
Wendy Carrol, producer for Out of the Shadows.

Wendy Carroll, producer and founder of Out of the Shadows, was an actress who brought her son to auditions, rehearsals and performances. Carroll’s son, Toby, has special needs and he inspired her to create the group when she noticed how much he wanted to be a part of what she was doing.

All of the actors raved about what a great experience it has been working with Out of the Shadows.

"I think without Out of the Shadows, I would not be as good as I was or feel as confident. Once Out of the Shadows showed up, they showed me there's belief out there for people, especially those with special needs and I really hope people come watch it or participate in it someday," Steele said.

So far, the group has done three productions, including Mary Poppins. When they performed their second production, Fiddler on the Roof, they sold out all three shows.

Out of the Shadows runs completely on donations and grants, all in an effort to make theatrical arts and fine arts accessible to those with special needs. Everyone who works on the show is also a volunteer, to help make dreams come true for the actors.

"Anything can happen if you let it, like seriously, it's true. So, just go for your dreams. That's what I'm doing," Fisher said.

“I felt like I was in a good world,” Basta said when asked about the cast and crew.

The actors’ special needs never seemed to slow them down. In fact, it seemed to inspire them to be even greater.

"Special needs doesn't define who you are, it just shows how special you are and use that to your advantage on stage," Steel explained.

They wrapped up their final shows on Sunday.