According to district officials and those on scene, an angry mob shouted at police and banged on the doors at the center where the meeting was held. 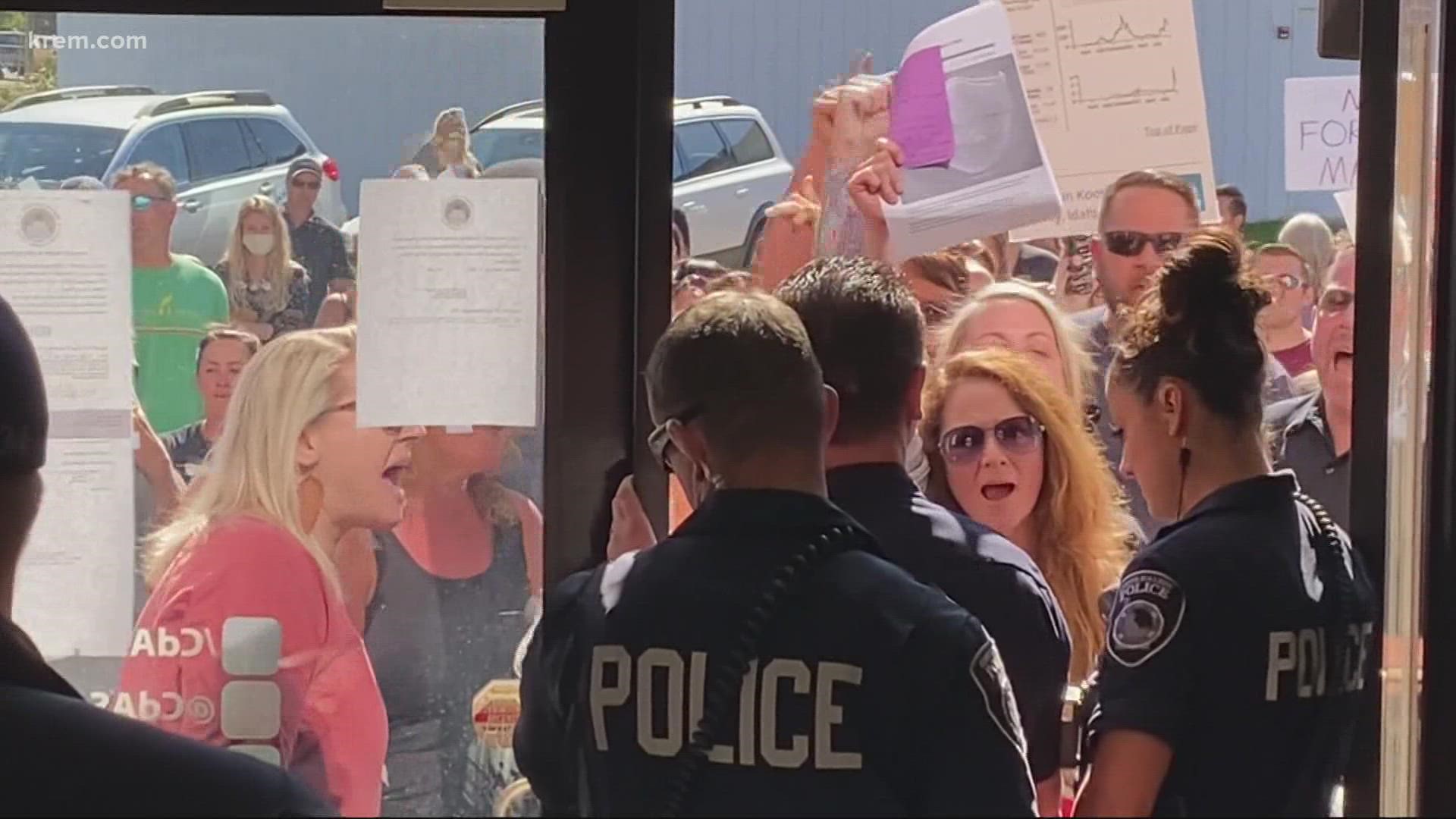 COEUR D'ALENE, Idaho — The Coeur d'Alene School District's Board of Trustees called off a special meeting on Friday to consider a temporary mask mandate after protesters swarmed the building.

A crowd of protesters gathered outside of the Midtown Center Meeting Room on 5th Street, where the special meeting was held, at 1 p.m. on Friday. The agenda listed a reopening plan for the 2021-2022 school year, including masking and quarantine.

At a meeting on Tuesday, Sept. 14, the board adopted a COVID-19 mitigation operating plan that strongly recommends but does not require masks to be worn in schools. The school district has had hundreds of known positive COVID-19 cases since the first day of school on Sept. 7.

KREM 2 reporter Morgan Trau, who attended the meeting on Friday, said school board members were worried about safety. According to district officials and Coeur d'Alene Press staff on scene, an angry mob shouted at police and banged on the doors at the Midtown center.

A video tweeted by Trau shows a large group of people standing outside of the meeting room chanting, "No more masks."

BREAKING: The meeting has been postponed. Board members were worried about safety, per city fire code.

From my view of the outside, it is extremely hostile. Expletives are being screamed, police are needing to hold people back and board members are leaving safely.#CDA @KREM2 https://t.co/2bb1MgFhJC pic.twitter.com/qMbJxUS8dp

Here is more footage of the protesters outside the school board meeting on Friday.

The mob, estimated at up to 200 people, then reportedly moved to the district's administrative center on Northwest Boulevard. The district office was placed on lockdown for safety precautions. Many protesters said the school board members should be fired for refusing to hold the meeting.

The school district is unsure when the board will hold its meeting. A spokesperson said all employees left early and they were escorted to their vehicles.

CDA Public Schools released a statement to families. Here is the statement:

"The Board of Trustees special meeting scheduled for early this afternoon to allow the Trustees to discuss Covid-19 mitigation measures was canceled shortly after it was set to begin. It became apparent the number of people intending to gain access to the meeting room exceeded the room capacity allowed under city fire code, and this was communicated to those waiting outside. After consulting with law enforcement, the board agreed to cancel the meeting. Some in the crowd began banging on the exterior doors and shouting to be let in as Board members and District staff were led to safety.

Shortly afterward, a group of protesters entered the District Office, prompting the building to be placed in lockdown for about 90 minutes. Police responded to the scene, and all employees later were able to leave the office without incident. We wish to express our gratitude to the Coeur d’Alene Police Department and our School Resource Officer team for their presence at both locations today and providing for the safety of our Board members, District administrators and staff.

As the board was unable to conduct its meeting today, there has been no change in our operating status. A mask requirement is NOT in place. We continue to strongly recommend masks. There has been no decision on rescheduling today’s board meeting. As always, we will provide updates on any changes in our operations, including Covid mitigation strategies. We are aware of a rumor circulating that the District has secretly adopted a mask mandate. That is, of course, false."

Staff with the Coeur d'Alene Press, a KREM 2 news partner, contributed to this report.