Eagle is now the second city in Idaho to consider itself a sanctuary city for the Second Amendment. 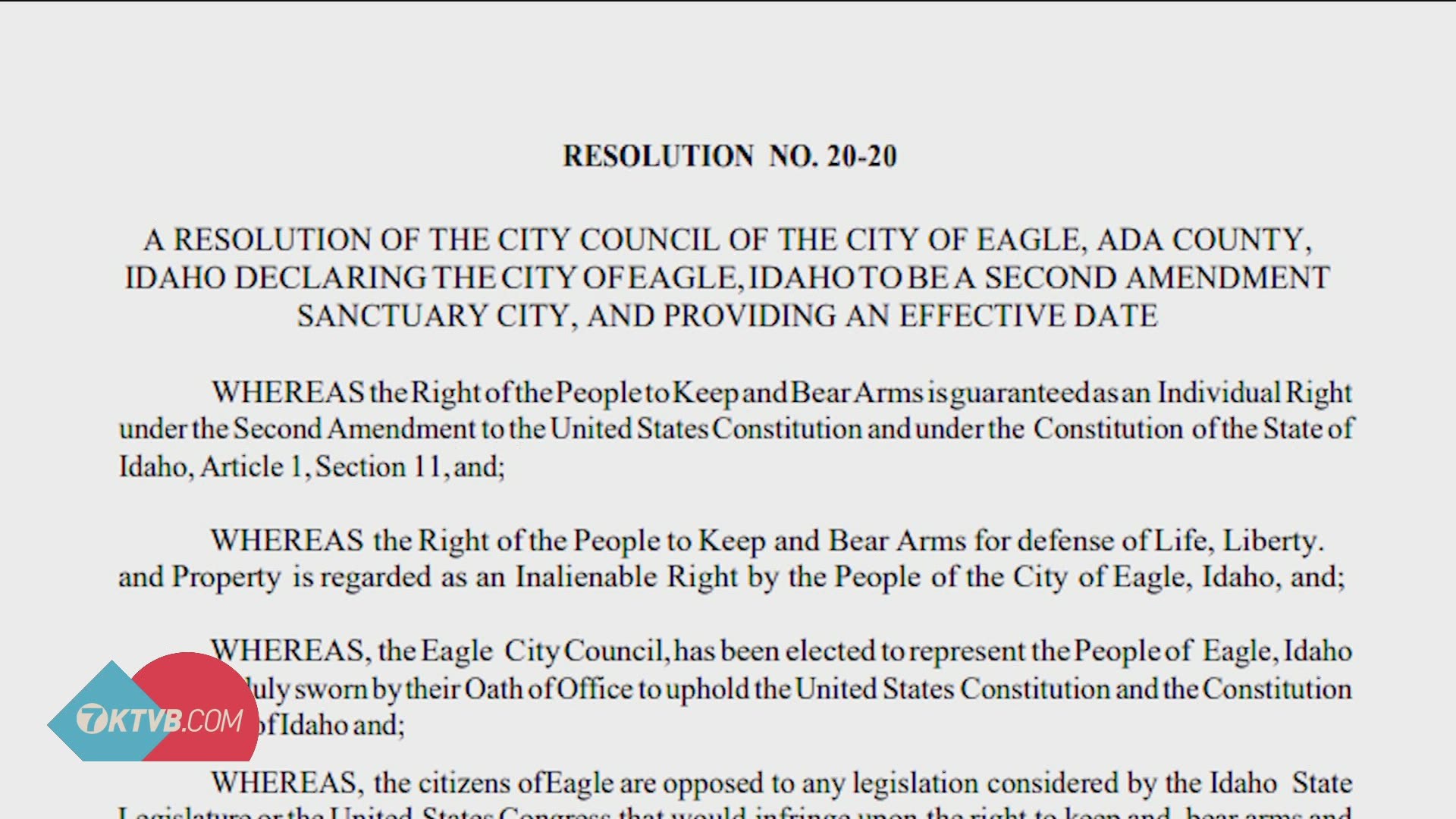 EAGLE, Idaho — Typically associated with churches and intended as a refuge for criminals, the term "sanctuary city" dates back thousands of years.

In the United States, sanctuary cities gained a foothold decades ago. Over the last several years, the term gained traction as it pertains to immigration.

Last year, however, conservative Americans took ownership of the term and began using it as it applies to the Second Amendment of the United States Constitution.

Hundred of cities in over 20 states have declared themselves Second Amendment sanctuaries, a safe place where the Constitution is the only rule of law regarding gun ownership.

After a meeting last night in Eagle, Idaho now has two such cities.

Eagle City Councilman Brad Pike read Resolution 2020 aloud during Tuesday night's council meeting. Members voted unanimously to approve it and the city became only the second in Idaho to declare itself a Second Amendment sanctuary city.

Four people attending the meeting spoke to the council, one opposed and three in favor of the resolution.

Just west down the highway, Star, Idaho declared itself a sanctuary city for the Second Amendment in July. The resolution passed unanimously in less than two minutes.

The Eagle City Council opposes any legislation that infringes upon the Second Amendment, according to Eagle mayor Jason Pierce. It is for this reason the city decided to pass Resolution 2020.

"We want to say that we believe in the way the Second Amendment is written and we want to make sure that the residents of Eagle always have that right to bear arms," Pierce said.

While there is currently no legislation in Idaho that could impact a citizen's right to bear arms, Resolution 2020 is a precautionary law that will be in place in the event such legislation is drafted.

"We don't know what's going to happen," Pierce said. "We just want to take a stand saying that if there are state laws that are written, the city of Eagle will want to abide by the Second Amendment in the future."

Should Idaho pass a law that infringes on the Second Amendment, Eagle Police and the Ada County Sheriff's Office will still abide by the city laws, according to Pierce.

"We would want to say that the residents of Eagle have the ability to have their Second Amendment rights," Pierce said.

Other states' attorneys general have said resolutions of this nature hold little legality but are rather a statement of a city's support of the Second Amendment. Pierce said he acknowledges that the city's resolution is just that.