Viewers and online readers have accused tribes of ruining salmon runs due to unfair practices, including the use of gillnets in the rivers. 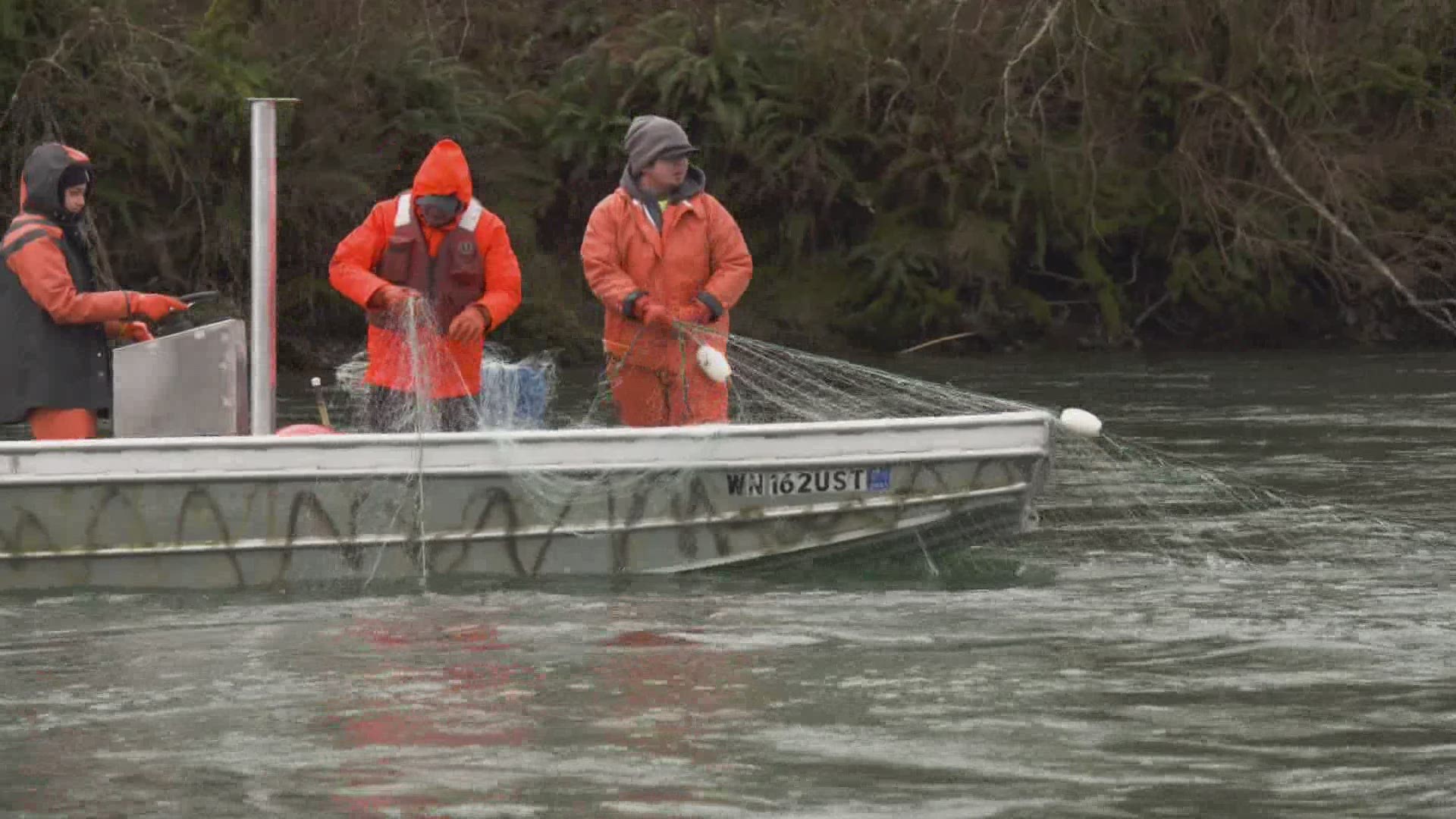 Soon after KING 5 began running the series “Skagit: River of Light and Loss,” viewers and online readers posted highly-charged accusations on Facebook and sent the same via email – that Native Americans are to blame for the decline in Pacific Northwest salmon species due to abusing their treaty rights, over-fishing and using gillnets.

However, Washington state wildlife officials say these statements are false.

The KING 5 Investigators’ series focused on the three dams on the Skagit River owned and operated by Seattle City Light. The public utility’s dams are undergoing federal relicensing that’s been an adversarial process, with stakeholders calling the city “uncooperative” and “arrogant.”

While scientists from City Light are on record saying their dams don’t hurt fish, scientists from the three Skagit basin Indian tribes, federal and state natural resource agencies, including NOAA Fisheries, the National Park Service and the Washington State Department of Fish and Wildlife (WDFW), local government and environmental non-profits all disagree. Those groups are pressuring City Light to do much more to mitigate their adverse impacts on salmon recovery and Native American ways of life.

The Upper Skagit Indian Tribe is still fighting to get the city to study the feasibility of removing Gorge Dam, one of three in the project.

Many viewers responded by saying it's not the dams causing fish to disappear, but the tribes who fish the river with gillnets.

“It’s the gill nets wiping out the salmon from local tribes. It’s always been the problem.”

“Maybe they should net the river! There [sic] ancestors didn’t buy gas goats and nets. They are the ones who ruined the steelhead run by over-netting the river.”

“Get the nets out of the water.”

“A fisherman with a pole is not going to impact the fish population. A net will.”

Kelly Susewind, director of WDFW, said people making these remarks do not understand the process.

In the state of Washington, WDFW and the tribes co-manage the rivers and go through a lengthy process to determine how many fish, if any, can be taken on each run. It is a government-to-government fish management program that includes negotiating the fisheries through a process called North of Falcon.

State and tribal fisheries experts sit on North of Falcon technical committees that analyze the size of runs as salmon and steelhead migrate back to their native rivers. Computer modeling is used to set conservation goals.

As provided in the landmark 1975 court case known as the “Boldt Decision,” the determined number of fish that can be taken is split 50-50 between native and non-native fishers.

“That’s supported by the courts. ‘If you get 10 fish, I get 10 fish.’ That’s where we stop. I can catch mine by hook and line or a troller or a seiner or a gillnet. That’s their right. That’s their choice,” Susewind said.

The right to use nets is rooted in the 1855 Treaty of Point Elliott. “The right of taking fish at usual and accustomed grounds and stations is further secured to said Indians,” wrote the treaty authors. The treaty was signed by representatives from the United States and Puget Sound Indian chiefs.

"The tribes are exercising their treaty right,” Susewind said. “We endeavor not to tell each other how to fish. Just manage how many fish you’re impacting and split that up.”

The three Indian tribes involved in the Skagit Hydropower Project re-licensing submitted public documents to the federal regulatory agency that say City Light’s dam operations and the utility’s current plan moving forward harm treaty-protected resources such as Chinook salmon and steelhead, which are both on the Endangered Species List.

The Upper Skagit Indian Tribe, for example, has been unable to exercise its treaty right of fishing in “usual and accustomed” ways because of the significant decline in salmon abundance.

“Many people say the Indians are the reason there’s no more fish,” said Marilyn Scott, Upper Skagit Indian Tribe elder and council member. “We only take what we need. We do not take more than what we need.”

Loss of salmon means in recent years the tribe has not been able to fish to meet their ceremonial, spiritual or sustenance needs. According to data from the Upper Skagit Natural Resources Department, the tribe has gone from a high of fishing 79 days in 1980 to only six days in 2017. In 2018, 2019 and 2020 they fished nine days per year.

Scott said it’s not the tribes’ fishing practices but human development, including Seattle’s dams, that has led to the loss of their treaty rights. The dams sit on the Upper Skagit’s sacred ancestral lands and block off approximately 40% of the river for salmon to use for spawning and growing, according to state and federal agency scientists.

“The citizens of Seattle benefit (from the dams)," Scott said. "I understand that, but it impacts us in such a big way. It impacts us to the core of our lifestyle. It truly does. And we can’t put a value on that."

KING 5 has heard from viewers and online readers who say the treaties are no longer relevant.

“Tear up those dam things,” wrote one person on Facebook.

“The Natives want to be treated special. I’ve been around enough of them to know that,” wrote another reader.

“I hear a lot of rhetoric, ‘We gave the tribes too much in the treaties,’ when in reality we gave the tribes nothing in the treaties," said Susewind, the WDFW director. “The treaties were a transfer of rights from the tribes to the government. And for that trade, (the United States got) all this beautiful land of the Pacific Northwest. They reserved rights. They maintained the rights they had to hunt, fish and gather in common with us. That’s a 150-year-old right.”