Isolation rooms have been used at public schools for decades. Sometimes called safety rooms or quiet rooms, they're intended as a tool to separate students who may be a harm to themselves or others. 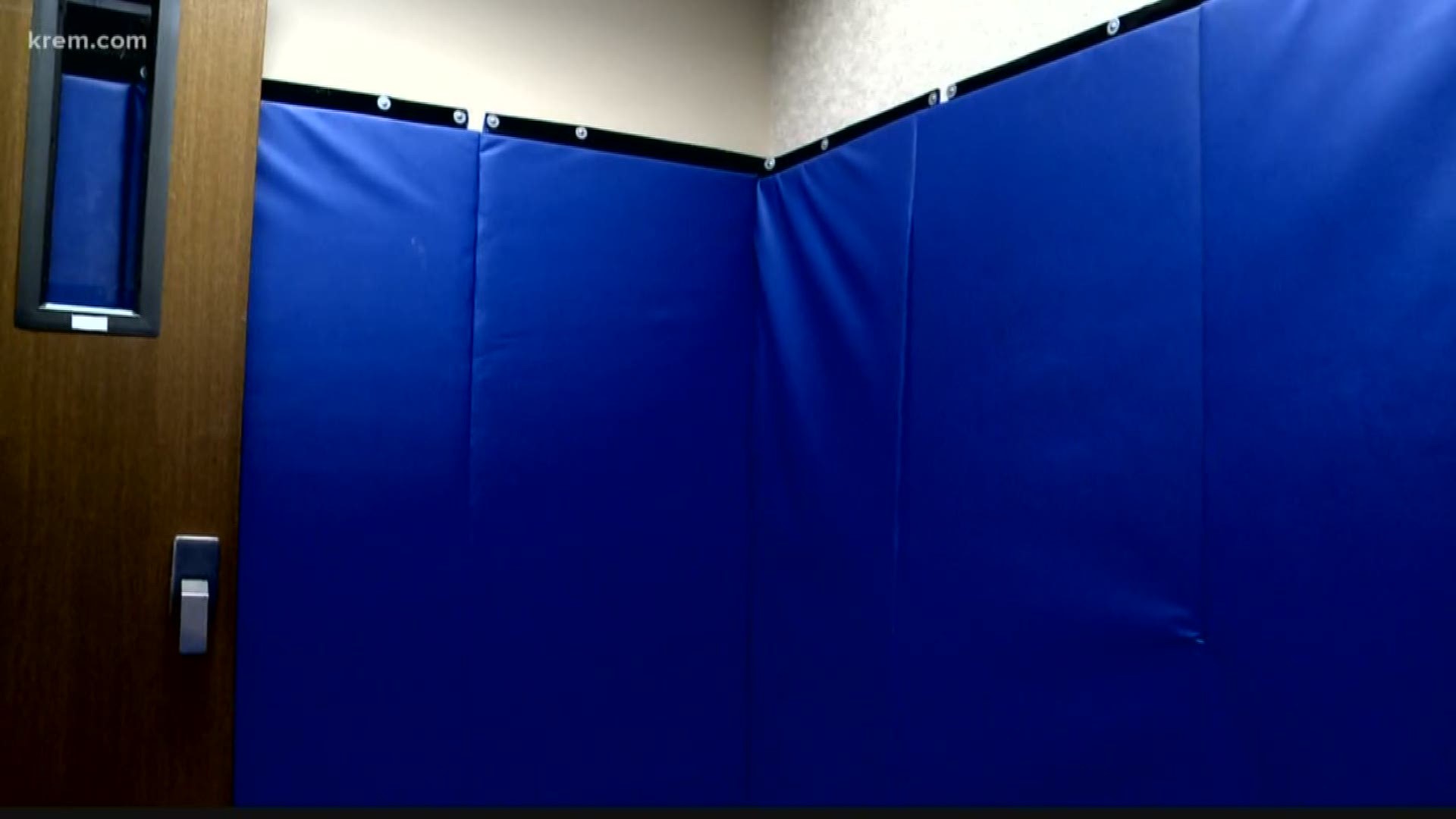 SPOKANE, Wash. — Several Spokane parents are speaking up in hopes of changing the way special education students are isolated and restrained in Spokane Public Schools.

Data from the 2016-17 school year shows the Spokane Public Schools district had the highest numbers in the state for students being isolated and restrained. District leaders say the high numbers are likely due to the district over-reporting incidents, but parents of special needs students say their children are being restrained and isolated far more than necessary, sometimes with detrimental effects.

The numbers alone are staggering. SPS reported 4,890 incidents where a student was either isolated in a small, padded room, or restrained somehow during the school day.

To put the numbers in perspective, Seattle, which has almost twice as many students, had 493 restraint and isolation incidents. In Tacoma, there were 561 incidents.

Restraint can mean anything from ankle restraints and chair straps, to students being physically held to try and calm them down.

RELATED: Bill would require educators to tell parents of use of isolation, restraints

In November, when the data was first reported, KREM asked Spokane Public Schools why it has such a high rate of incidents.

"Spokane Public Schools reports its data proactively, transparently, and accurately, and studies it for trends and opportunities for alternative approaches," district spokesman Brian Coddington said. "SPS data captures incidents such as when students are hugged to help calm them while they regain control, escorted from their classroom, prevented from running out of school, or to keep them on school grounds, especially at schools located on very busy streets."

But KREM talked with several parents of special needs students who said the district's approach to isolation and restraint needs to change.

"He just wants to be like everybody else," one mom said.

The woman, who didn’t want to be identified, said her son, who's been diagnosed with autism, has been placed in an isolation room more than 100 times since starting kindergarten a few years ago.

“He's not the same little boy he used to be. Sometimes he shuts out and he doesn't want to talk," she said.

In 2015, the state passed a law that requires schools to report every time restraint or isolation is used. Sometimes, the mom said, it's hard hearing the truth.

“I'll ask the teacher and she'd say something like, 'He was crying, then he fell asleep, and he was there for hours,’” she said. “I wish I could have been there to fix it."

She is adamant that it's not the students who need to be fixed, but rather, the system.

“People don't even know about it. Isolation, it's almost like it's in the dark, or kind of off in a corner,” she said.

Nikki Lockwood is an outspoken advocate for families and students with special needs. She launched the Every Student Counts Alliance after one of her daughters was diagnosed with autism.

"One time in sixth grade, she got suspended, and it was because the school was not following her IEP [Individualized Education Program],” Lockwood said. “After that day, and I realized that was illegal and they shouldn't have done that, I definitely became an advocate with a capital A."

Lockwood's now pushing for more special education resources for schools and families. She wants better training for educators, so they can use alternative methods of behavior modification, with a goal of preventing the need for isolation in the first place.

“Because it really fixes nothing. It's isolation and suspension instead of education,” Lockwood said.

It's something Cindy Edwards knows well. Her special needs son bounced through at least five different schools in the Spokane Public Schools district before finally ending up home-schooled.

Edwards acknowledges her son has had severe behavioral issues, with sometimes violent outbursts. She said repeated isolation only made him worse and pushed him further and further behind in his school work.

“He had to report there for a whole month. Every day he had to go there, stay at least four to five hours there,” Edwards said. “They would bring him out if he was doing good and put him in the desk there. But it was still a small room, so he was freaking out. He wouldn't do any of his work. He'd just shut down.”

By law, educators are only supposed to isolate a student when that child is a threat to themselves or others. But all of the parents KREM talked to say it's routinely used for other reasons, such as a child not following directions.

“It was overused. It was to put him out of the classroom, so they didn't have to deal with him,” Edwards said.

A look at the numbers

The latest numbers from the state Office of the Superintendent of Public Instruction show only 17 of the district's 52 schools have an isolation room.

But in certain schools, that room is used a lot.

Here are the schools with the most isolation incidents for the 2016-17 school year:

The data does not specify whether the students are all special-needs students.

District spokesman Brian Coddington says there may be issues with this data.

“It seems like the case of Balboa, they might not be accurate. It seems like a lot for just three students. But it really speaks to the individual nature of each individual student. To really be able to judge, just based on the data alone, is not really a good measure of what's happening,” Coddington said.

What the district is doing

Coddington said the district is working to make sure staff in the district understand exactly what qualifies as isolation and when it should be used.

“These are situations where things have escalated a bit. The student has gotten to a point where the student can't manage themselves. And so, we want to make sure we're correcting that behavior, protecting themselves, protecting other staff and other students, and making sure that environment stays a good, safe learning environment for everybody,” Coddington said.

District leaders insist that isolation is sometimes the only effective way of controlling certain students.

A Facebook post in December shocked many in the Spokane community. Katie Pope, a 15-year-old girl with autism, was placed in isolation at Shadle Park High School.

In a 911 call from the school, you can hear Katie screaming in the background. When she emerged, her parents say she was covered in bruises from hitting herself against the steel door. While the rest of the room is padded to prevent kids from hurting themselves, the isolation room door was not.

“Imagine hitting yourself against an unpadded steel door repeatedly, with such force that the person observing it admits that he was amazed she didn't break bones in her face,” Katie’s father, Richard, said.

Richard said he immediately pulled his daughter out of Spokane Public Schools, taking Katie to Bellevue, where they now live.

“She shouldn't have been there, it should have been padded. If she injured herself, they should have let her out immediately,” he said.

Office of Superintendent of Public Instruction responds to numbers

KREM reached out to Washington's Office of Superintendent of Public Instruction. Officials said Spokane's numbers for isolation and restraint immediately stood out. They do believe at least some instances were over-reported and should not have been counted.

“I would just say making sure all of the school staff who are involved in students who have been restrained or isolated and making sure they have a tool chest of other strategies that could be used. We want to make sure we provide all of the supports on a proactive basis to both teachers and students. We only want to use isolation when there are no other options,” said OSPI Assistant Superintendent Glenna Gallo.

Agency leaders said they are sending a specialist from Olympia to Spokane and other districts this spring, to help educate special education staff.

“The rule is really clear that isolation and restraint can only be used when safety is at risk. So, I would recommend, if it's happening, and it's not meeting those requirements, that they definitely notify the district, and if they need to, then work through OSPI,” Gallo explained.

District leaders said they are constantly looking for ways to improve, from the way isolation is reported, to the isolation rooms themselves.

“Padding has been added to that room in particular [at Shadle Park]. And that's a situation where we're going to learn from everything we experience. And moving forward, we're going to add padding to that room and any other room that might not have it,” Coddington said.

Parents say the district needs a culture change, not just for their kids, but all the kids to come in the future. They say that all children deserve an education, not just because it's the right thing to do, but because it's also the law.

“When your kid is suffering, you have to speak out. It's really hard to do the first time, but then you get better at it. And when it's your child, you just do what you have to do to get them what they need,” Lockwood said.

The 2016-17 school year was the first year comprehensive restraint and isolation data was collected in Washington. OSPI leaders said this is just a starting point, to see where each district stands. It will take more time to make sure every district in the state is using the same criteria for reporting isolation and restraint.

The next round of numbers are expected to be released before May 2019.