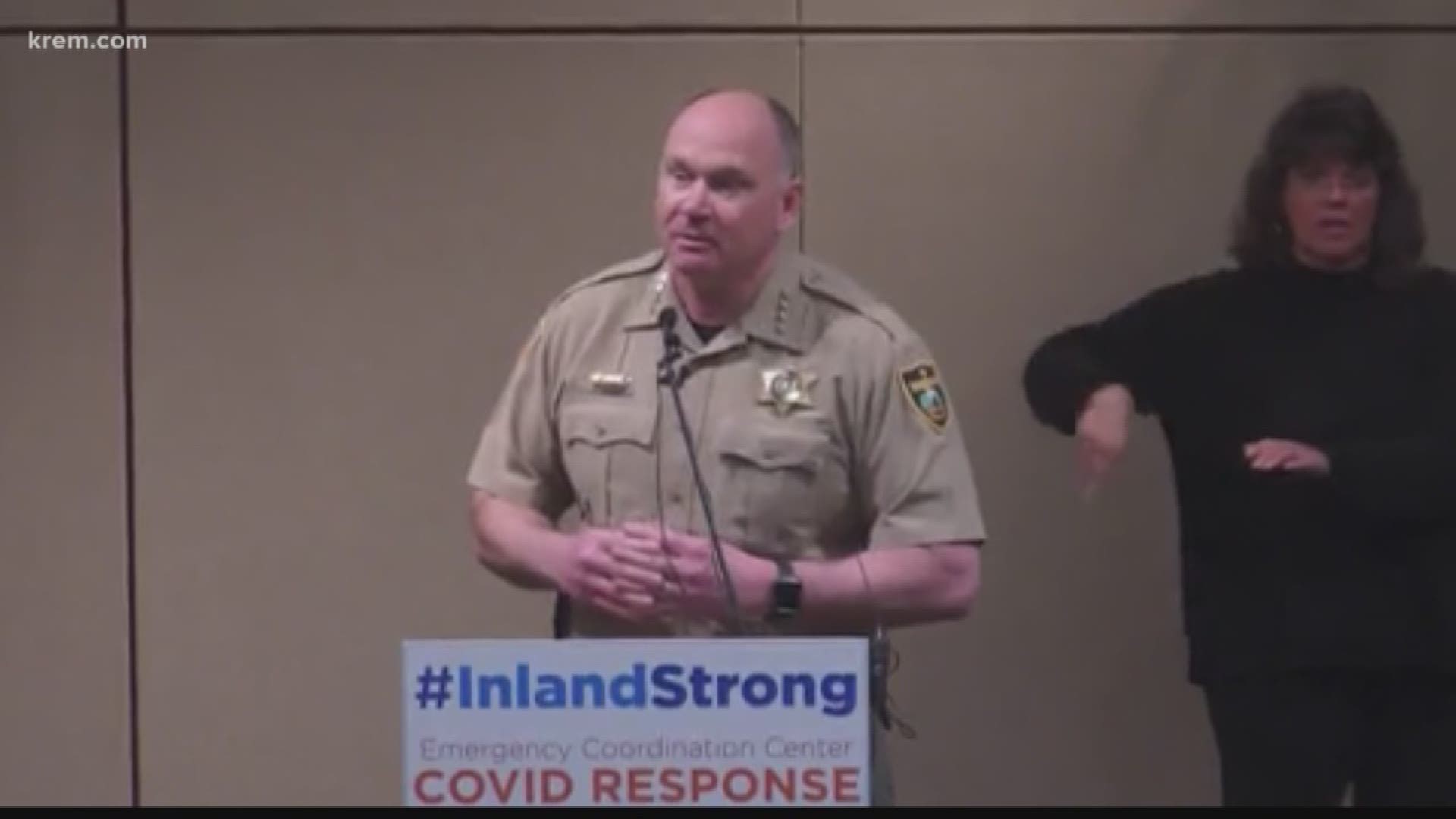 SPOKANE, Wash. — Law enforcement agencies throughout Spokane County say their members are educating people about Washington state's "stay-at-home" order rather than enforcing it.

However, they could shift their efforts to enforcement if many people or businesses violate the order.

Washington joined at least a dozen other states on Monday in issuing orders for residents to "stay at home," in an effort to slow the growing coronavirus outbreak. Only "essential businesses" may remain open to the public.

The order takes effect immediately for residents, and in 48 hours for businesses. It will be in place for two weeks.

Grocery stores, pharmacies, banks, gas stations and restaurants offering take-out are among the essential businesses that will be allowed to remain open. State officials urged residents to not rush these businesses and to not hoard supplies.

The Spokane Police Department said on Monday that their role in supporting the Washington Gov. Jay Inslee's order is to educate the community about how to comply, rather than detaining, arresting or ticketing those who are out of compliance.

Spokane Police Sgt. Terry Preuninger said on Tuesday that there could be a shift in enforcement policy if it is called for in the future.

“As time goes on and the situation changes, a person could be cited for potential violations," he said.

Preuninger added that there is a grace period any time a new law comes out or a directive is issued.

Spokane County Sheriff Ozzie Knezovich also addressed his department's role in educating the public rather than enforcing the order at a briefing on Tuesday morning.

“We are not going to take efforts that are going to be Draconian on this, folks. We’re going to educate you," Knezovich said, adding later that there is "nothing for [law enforcement] to enforce" unless people are gathering in large groups.

Steve Strachan, executive director of the Washington Association of Sheriffs and Police Chiefs, added that the order is enforceable but reiterated that law enforcement are focusing on education.

“I think we all need to work together because this shouldn’t be an issue of criminal sanctions," he added.

It is a gross misdemeanor to violate Inslee's order, and police can issue fines up to $5,000 and jail time of up to a year. But again, authorities say that is not the goal.

Sheriff's deputies or other authorities who see people gathering in large groups will be reminded not do so for their protection, Knezovich said.

Knezovich added that there are no road restrictions in the Spokane area as the order takes effect. That means people who live in Washington and work in Idaho are free to do so, as the border between the states is not closed.

“We are not going to be out there like a hall monitor looking for passes. That’s not going to happen," he added.

Rep. Marcus Riccelli said later that communities need to take steps to police themselves, adding that enforcement of the order takes away from local authorities' resources.

Some people have also written to KREM asking what they should do if they are concerned about people or businesses who are violating the order.

Knezovich recommended on Tuesday that they call Crime Check to report violations, so authorities can develop a list of businesses to remind about compliance.

State leaders are urging people to avoid calling 911 to report potential violations, as this is not an efficient use of emergency services.

Spokane County Health Officer Dr. Bob Lutz already has a list of several businesses in the county who are not complying with Inslee's directives, Knezovich added.

Knezovich said authorities are contemplating the possibilities of issuing tickets for businesses who do not comply, or looking to the courts or the state Department of Licensing to pull their licenses. However, he added that this is a last resort and law enforcement do not want to take this action if it is avoidable.

The tipping point at the business end, Knezovich said, is if authorities have to show up more than three times to enforce the order.

“I’m a rule of threes guy. ...We’ll give you two warnings and then, the third time, no more warnings," he said.

Strachan said citations could be issued and businesses licenses could be affected, but those decisions ultimately lie with local sheriffs and police chiefs.

“The last thing we want to do is arrest people over this. Because where are we going to put them?” Knezovich added.

"Law enforcement’s primary role during the COVID-19 pandemic is to help educate people about how to comply with orders to not gather together, to stay at home, and other restrictions. Law enforcement is not being asked to detain, arrest, ticket or establish checkpoints for compliance. Rumors of strict law enforcement or 'martial law' are simply not true," the sheriff's office wrote in the alert.

The sheriff's office said authorities in the area are continuing to urge "voluntary compliance," adding that deputies will not patrol neighborhoods and different areas to see if people are out when they should not be.