Under Gov. Jay Inslee’s “Healthy Washington: Roadmap to Recovery” plan, only appointment-based training with one client per 500 square feet is allowed at gyms. 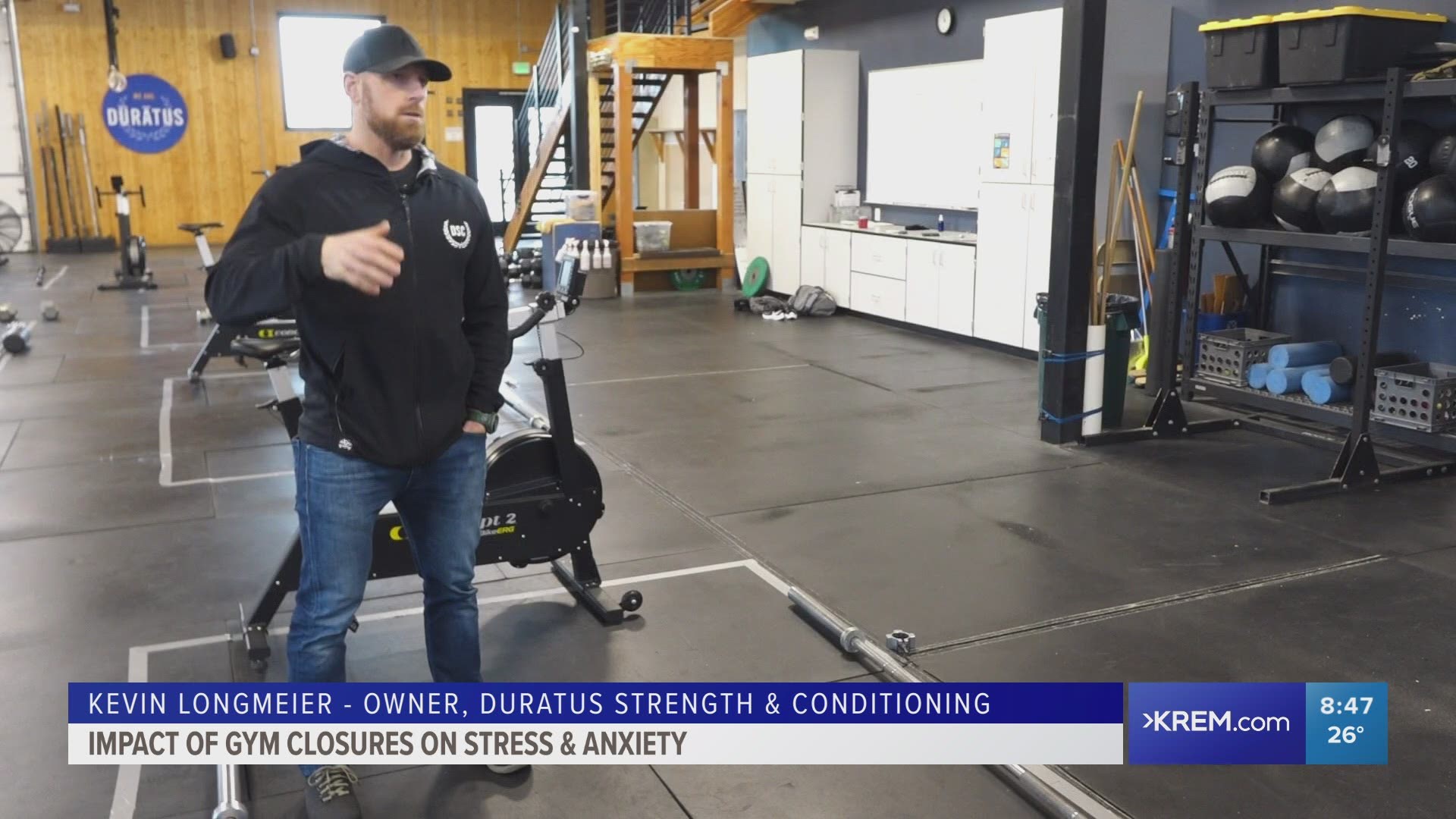 SPOKANE, Wash. — In east central Spokane, Dūrātus Strength & Conditioning is slowing starting to welcome members back. In the last 10 months, they, along with gyms across the state, have been forced to close their doors twice and were just recently allowed to re-open at a limited capacity.

“Certainly, a year of adversity,” Dūrātus owner Keven Longmeier said. “A year where we’ve had to adapt in a lot of ways.”

Longmeier described the past year as his most challenging yet as a business owner. But, he said it’s also been difficult on his clients.

“To know that those folks who count on us for fitness and encouragement and health in their lives, that they don’t have that outlet, [it] has been really challenging to bear that responsibility,” Longmeier said.

It’s part of the reason Longmeier joined more than a dozen local gym owners in forming the Stronger Together Coalition to urge Washington Governor Jay Inslee and public health officials to reconsider their one-size fits-all approach to restricting gyms.

Under Washington Governor Jay Inslee’s “Healthy Washington: Roadmap to Recovery” plan, only appointment-based training with one client per 500 square feet is allowed.

Currently, the entire state of Washington is in Phase 1 of the reopening plan.

Under Phase 2 of the “Healthy Washington: Roadmap to Recovery” gyms and fitness centers would be allowed to re-open at 25% capacity. Guidelines for Phase 3 have not yet been released.

State public health officials have been wary about easing restrictions on gyms and fitness centers, citing that COVID-19 can spread more easily indoors where people are talking loudly, singing or breathing hard.

Longmeier said he understands the concerns, but adds there hasn’t been a single instance of COVID-19 transmission at his gym.  He believes that he his staff can safely manage more clients than currently allowed.

“We think that the government should be agile enough to recognize that this is an industry that shouldn’t be shut down and that restrictions that are placed should be nuanced given the different size or buildings the different activities that are happening in these places,” he said.

While the pandemic’s long-term impact on people’s mental health and stress remains unclear, what is clear, according to Professor of Psychology at Washington State University Chris Barry, is that exercise helps.

“Physical activity, for a lot of people, is sort of a form of therapy or stress relief,” Barry said.

Barry’s colleague, Professor of Nutrition and Exercise Physiology Glen Duncan, aimed to figure out if a change in physical activity during the pandemic led to a change in stress and anxiety.

He and his team surveyed nearly 4,000 people from Washington state’s twin registry between late March and early April.  They asked how the twins perceived their physical activities levels changing as a result of the pandemic and restrictions.

“And, we looked at that in relationship to how people felt their depression, stress and anxiety levels were,” Duncan said.

“So, it’s pretty much anybody who changed their exercise levels up or down had some association,” Duncan said.

Another way to interpret the findings: a change in their activity routine brought on more stress and anxiety.

Back at Dūrātus, Longmeier wants his clients to be able to get back into a routine.

“People need outlets, they need healthy coping mechanisms and we really, truly believe that this is one of those,” he said.