Some of the changes at stores in the Spokane area include the installation of plexiglass barriers and limiting the amount of customers in a store at one time. 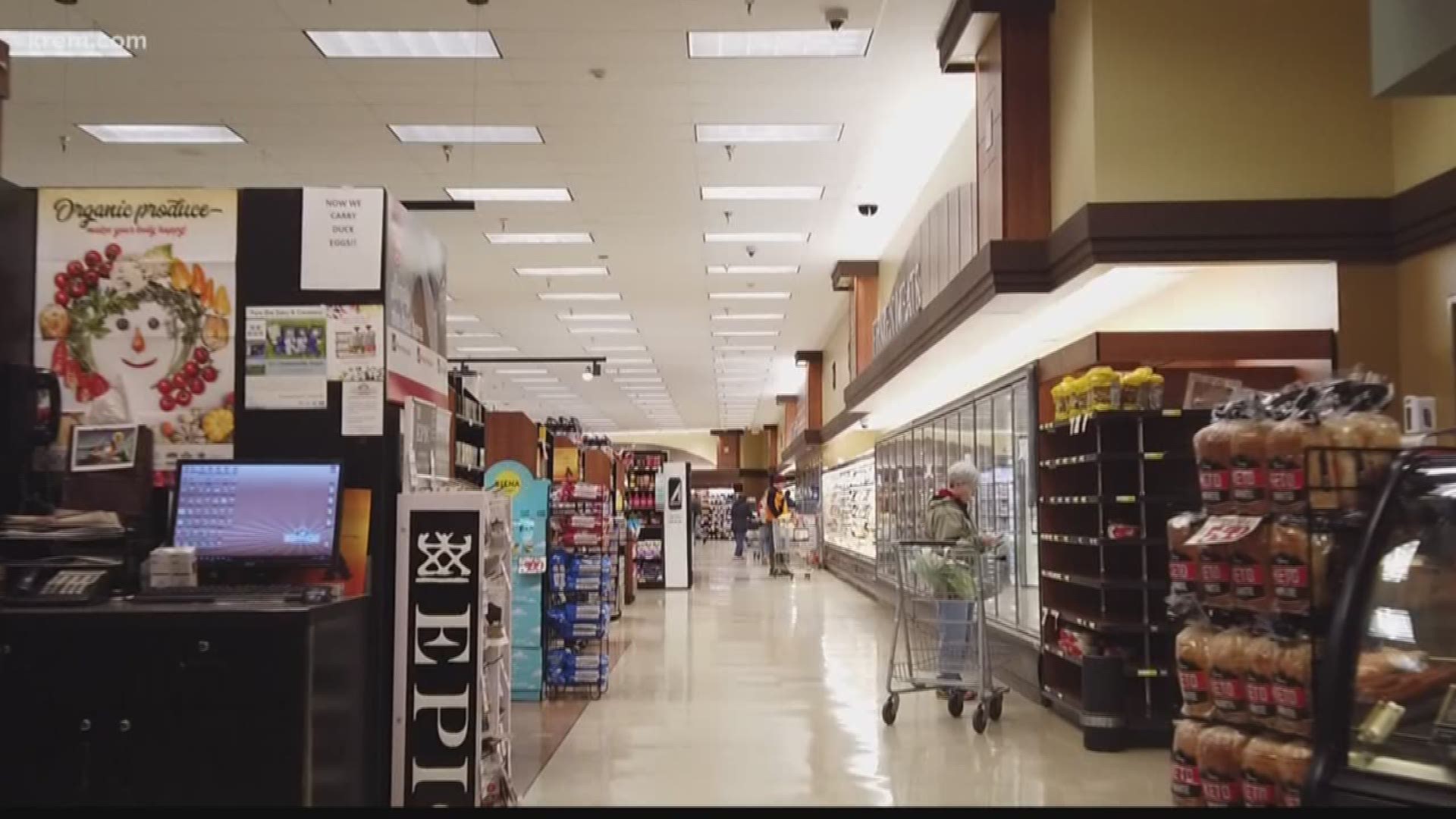 SPOKANE, Wash. — Grocery stores throughout the Spokane area are changing their policies and procedures to help protect employees and shoppers during the coronavirus pandemic.

Some of the changes include the installation of plexiglass barriers at some stores and reduced hours, among others.

Here is a breakdown of how local stores are adapting to the public health crisis.

Yoke's Fresh Market has changed its hours to help with restocking, and added hours especially for seniors and people who are more vulnerable to the coronavirus.

On Wednesday, Yoke's is open from 6-9 a.m. for vulnerable populations, and is opening the pharmacy starting at 7 a.m.

Yoke's also changed its hours from 6 a.m. to 8 p.m. at most locations for restocking and a daily deep cleaning. The Kellogg store opens at 6:30 a.m.

"We are deeply grateful to everyone in our communities for working together with us to offer this dedicated shopping time to our most vulnerable neighbors," a spokesperson for Yoke's said.

Safeway and Albertsons stores in Washington state are limiting the number of customers who can be inside the store at one time to roughly 30% of the stores’ capacity. The stores are also implementing a one-way movement policy in the aisles, which will be marked to provide direction.

The company has also sourced cloth masks for all of its employees.

An announcement on Monday said all of the enhancements in safety measures were expected to be complete by the end of this week.

All stores in Washington have also installed plexiglass partitions in their checkout lanes as a protective barrier between customers and cashiers.

Stores have adjusted their hours to 6 a.m. to 10 p.m. to give teams time they need to restock shelves and deep clean.

Safeway and Albertsons have also set aside dedicated shopping hours for senior citizens and other at-risk populations, such as pregnant women or those with compromised immune systems. The dedicated times are Tuesday and Thursday from 6 a.m. to 9 a.m.

All customers who are not categorized as “vulnerable” are asked to respect these hours.

Stores are also offering "contact free" delivery and drive-up services, and free same-day and next-day delivery of prescriptions through at least May 1.

The barriers have also gone up in other areas of the store where customers and employees closely interact, such as the deli.

Rosauers has also expanded hours reserved for at-risk populations to shop in their store. At-risk shoppers can access the story early from 7 a.m. to 9 a.m. Tuesday, Wednesday and Thursday each week.

RELATED: Rosauers stores to install plexiglass barriers between customers and employees at checkstands

Rosauers announced this week that all stores will be closed on Easter Sunday, reopening on Monday, April 13 at 7:00 a.m.

"Our employees have done an amazing job of serving the needs of our communities, and dealing with the stress of being on the front lines as the COVID19 pandemic continues They are in need of a well-deserved break to spend time at home with their loved ones,", said Jeff Philipps, President and CEO of Rosauers, in a statement.

Trader Joe's is making people line up outside of its South Hill location and only allowing a small amount of customers to shop at any given time. The store is also keeping every other checkout stand closed, wiping down surfaces and more to ensure their employees and customers healthy.

The company is also limiting customers to two of each product and only one full cart per trip.

Trader Joe's also announced on its website that its stores would be closed on Easter Sunday to give employees a much-needed break.

RELATED: Some stores like Target, Trader Joe's will be closed on Easter Sunday

Fred Meyer is now limiting the number of shoppers that can enter its stores at a time to mitigate the spread of the coronavirus.

Stores began limiting the number of customers to 50% of the building's calculated capacity on Tuesday. They are allowing 1 person per 120 square feet.

Over the past few weeks, Fred Meyer has installed plexiglass partitions at registers and placed distance marking decals on the floors. The company is also encouraging employees to wear protective masks and gloves, and is taking employees’ temperatures in distribution centers and some stores.

On Saturday, April 4, Walmart began limiting the number of customers who could be in a store at once. Stores now allow no more than five customers for every 1,000 square feet at a given time, roughly 20% of a store’s capacity.

To manage this restriction, the associates at a store will mark a queue at a single-entry door and direct arriving customers there, where they will be admitted one-by-one and counted. Associates and signage will remind customers of the importance of social distancing while they’re waiting to enter a store, especially before it opens in the morning.

Once a store reaches its capacity, customers will be admitted inside on a “1-out-1-in” basis.

RELATED: Walmart regulating the number of customers in stores due to coronavirus outbreak

In an effort to increase social distancing, Costco temporarily started limiting the number of people who can enter its stores beginning last Friday.

Only two people will be allowed in for every membership card that is presented, according to the company's website. That means parents who normally haul their whole family to the store may have to leave some of them at home.

Costco has also added a third day of special shopping hours just for seniors and people with physical impairments. Initially, Costco was offering the 8 a.m. - 9 a.m. hours on Tuesday and Thursday, but it has now added Wednesday to the list.

RELATED: Costco to limit number of customers who can enter starting Friday

Costco has started limiting how many specific items people can buy at any one time, including paper towels and toilet paper. The store also will not accept returns of toilet paper, bottled water, sanitizing wipes, paper towels, rice and disinfecting spray.

Costco's food courts are offering limited menus, but the seating areas have been removed.