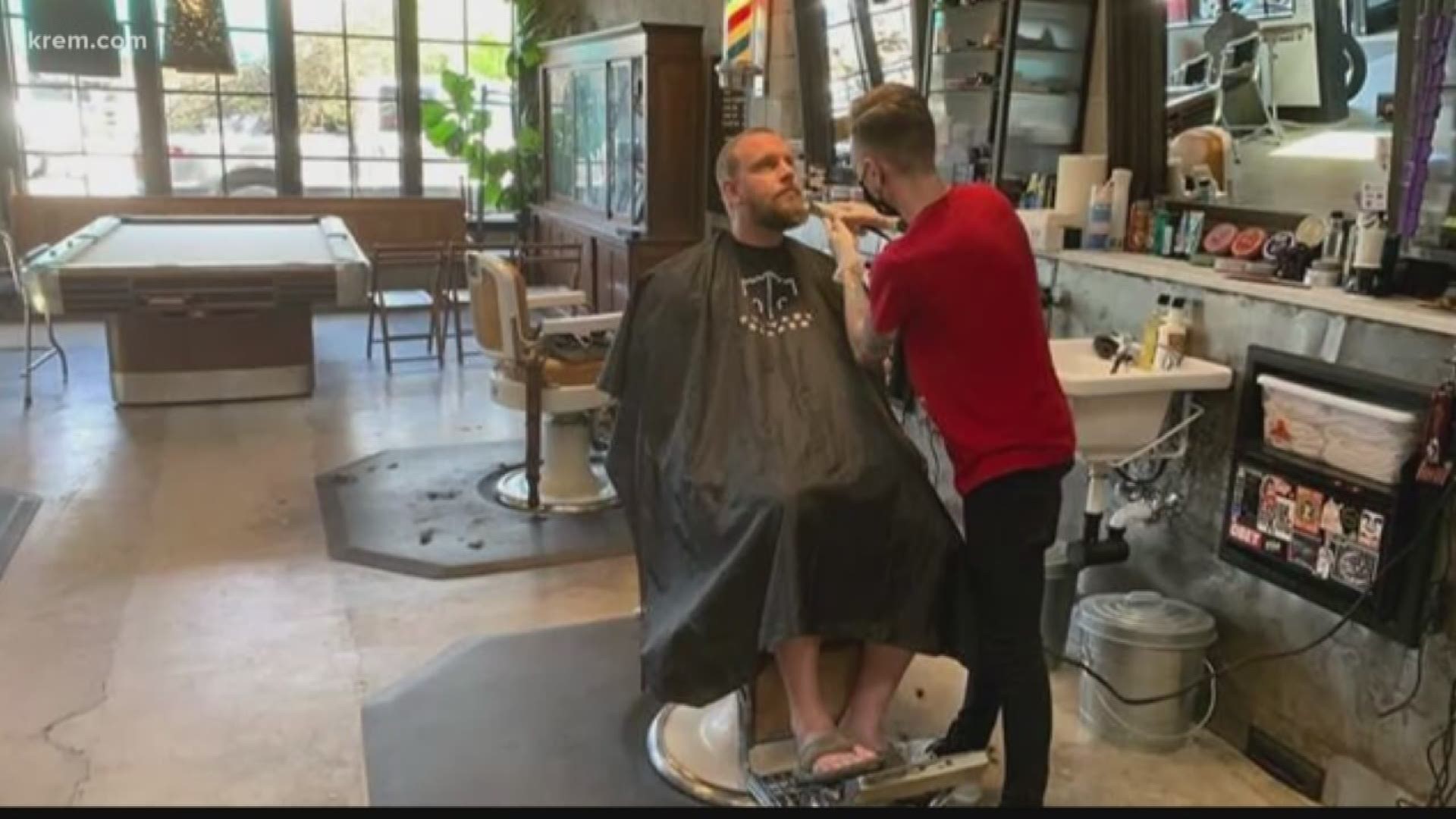 KOOTENAI COUNTY, Idaho — After being able to open their doors or dining rooms for the first time in over seven weeks due to the coronavirus pandemic, some Kootenai County businesses said they're happy to finally welcome customers back.

"Saturday was awesome. We were excited," said Rob Clark, owner of the Sawmill Grille in Post Falls. "Everybody seemed to be excited about being able to go out and eat at a restaurant again."

On Saturday, Gem State businesses entered the second stage of the "Idaho Rebounds" plan. Under the plan to reopen the economy, and an updated "Stay Healthy" order signed by Governor Brad Little, additional businesses like barbershops, salons, gyms, and recreational facilities were able to welcome back customers provided they followed health guidelines.

RELATED: What does Stage 2 of Idaho's reopening plan look like?

Restaurants were also able to able to open their dining rooms at 50 percent capacity to accommodate for social distancing.

Idaho bars remain closed, but are tentatively set to open on May 30 in the third stage of Little's plan, provided the state doesn't see a sharp rise in confirmed coronavirus cases.

RELATED: Coronavirus cases in Spokane and North Idaho: What we know today

Following state recommendations, seating capacity at the Sawmill Grille was half of what it would normally be. Clark said the restaurant did, however, benefit from being able to open its patio and add extra seating outside.

While social distancing and cleanliness measures were carried out smoothly, Clark said his servers and customers found it slightly challenging at times to adjust to wearing face masks constantly.

"It's amazing how much we read lips and we don't realize it," he remarked.

However, customers eager to eat out appeared to embrace the social distancing measures, Clark said. "Everybody was positive."

An additional set of customers were apparently eager to be eating at the Sawmill Grille, too: Washingtonians, despite Idaho's recommendation that Washington residents avoid nonessential travel across the border.

"We did have quite a few folks from Washington," said Clark. The restaurant's location on Spokane Street, just a few blocks South of an I-90 exit appeared to make it an easy destination for diners jumping across the border for a meal.

The Post Falls restaurant wasn't alone in attracting potential customers from Washington, however.

Paul Nemec, a barber at Coeur d'Alene's Bulwark Barbershop, said he and fellow barbers were forced to turn away some Washington residents who showed up to the busy shop looking to get a haircut without an appointment.

"A lot of the walk-ins are coming over from Washington," Nemec told KREM.

On Saturday, the barbershop opened its doors to customers for the first time since Governor Little's stay home order first took effect in late March. Per state guidelines, barbers have been wearing gloves and facemasks. Customers weren't allowed to wait inside the shop and were instead directed to wait outside or in their cars in order to accommodate social distancing, Nemec explained.

Still, customers eager to get rid of their quarantine hairdos flocked to the shop, Nemec said.

"We had 87 missed calls yesterday," the barber told KREM on Monday. "And we've had eight or nine people that just walk in and are like 'Hey, does anybody have any free time?'"

Nemec said Bulwark had to turn away many potential customers at the door since the barbershop mostly operates on an appointment basis. Nemec himself said his appointments are booked out solid for the next two and a half weeks, a significant jump compared to booking demand prior to the stay-home order.

"It was a really big struggle," Nemec said of the state-imposed closure of Bulwark.

"We didn't know what to do. We were told we weren't allowed to cut outside the shop."

Some of Nemec's faithful customers, however, held out on cutting their own hair and made appointments with Bulwark when they were able to.

"They're completely different people," Nemec joked of his clients' quarantine hair-growth. "A lot of them are like 'I haven't had this long of hair since high school.'"

Nemec encouraged potential customers to schedule a required appointment via the barbershop's website.

Back at the Sawmill Grille, Clark said the reopening of the dining room brought back not only much needed revenue, but a sense of community from the customers.

"You don't really realize how much that energy affects you until you don't have it," he said. "So to have that energy back was a very positive thing for us."

Clark told KREM that, following state guidelines, the Sawmill Grille was preparing to return its dining room to full capacity but with social distancing measures remaining in place.

RELATED: Some Idaho campgrounds reopened over the weekend, others aim for Memorial Day 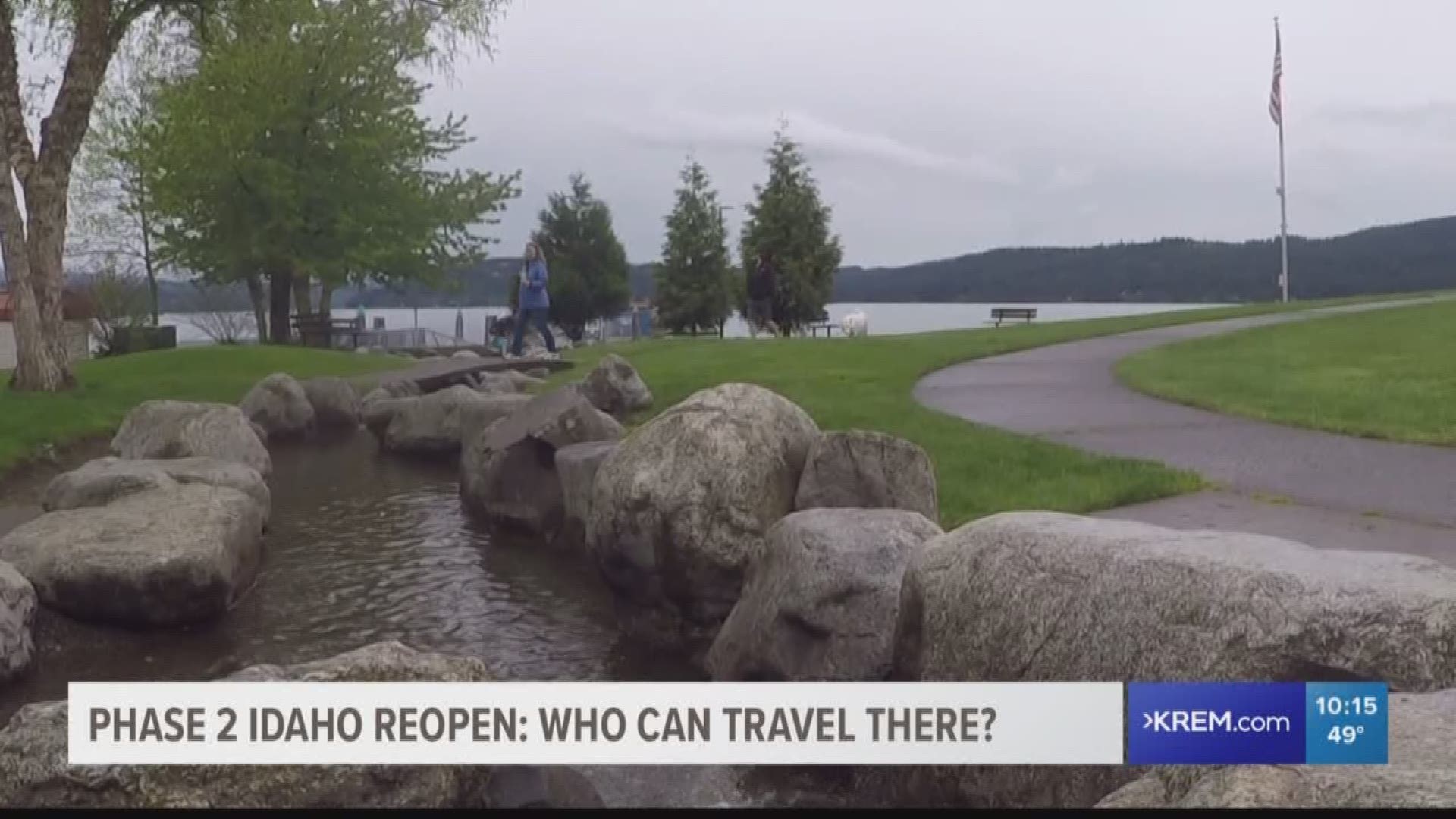