Washington Governor Jay Inslee ordered a temporary halt on certain evictions due to the economic effects of coronavirus. 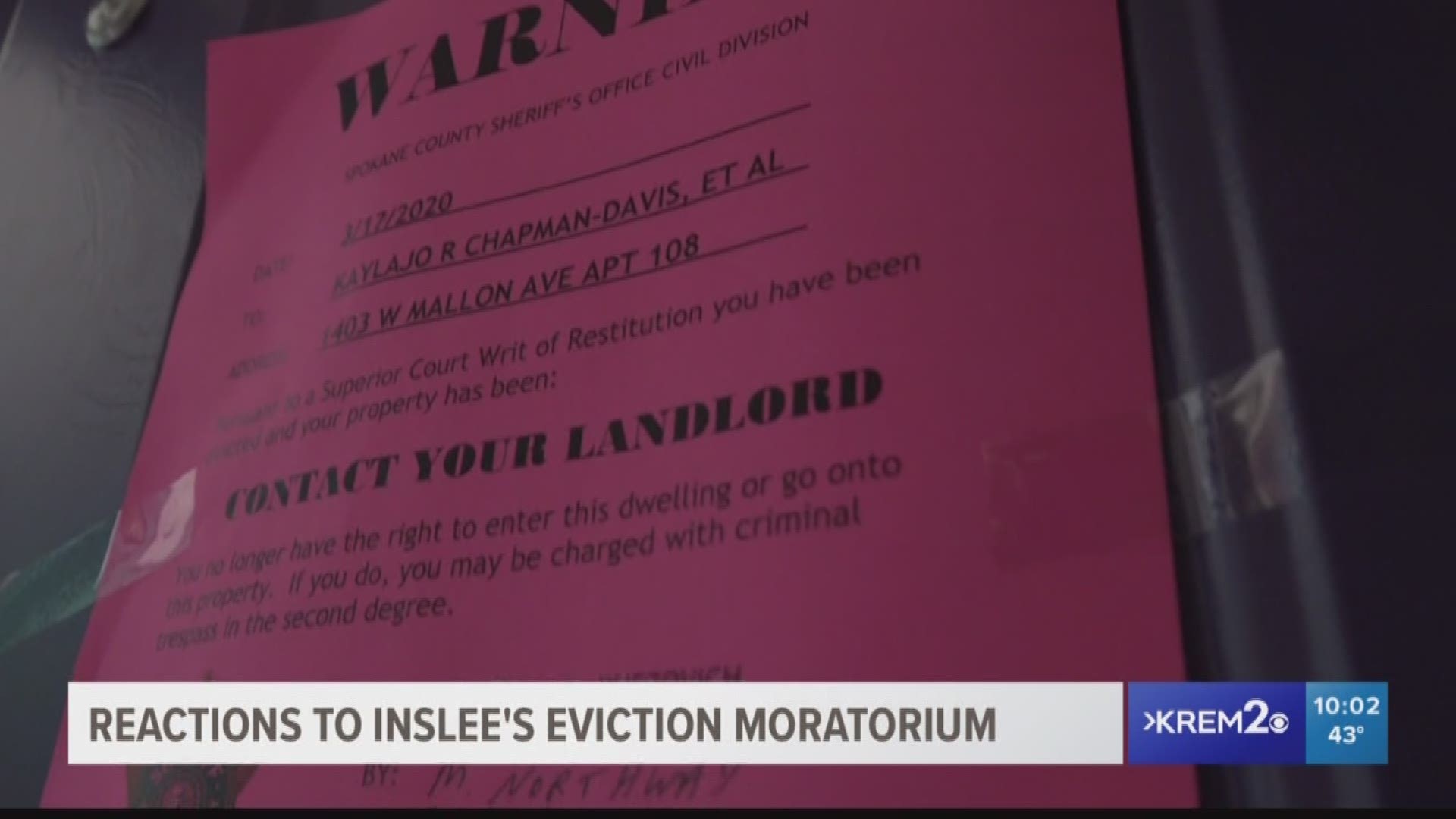 SPOKANE, Wash. — Groups representing tenants and landlords in the Spokane area both voiced support for a recently-issued moratorium on evictions.

Washington Governor Jay Inslee ordered the moratorium on Wednesday as the fallout of the COVID-19 outbreak threatens to seriously damage the global economy.

For the next 30 days, landlords cannot evict tenants because of a failure to pay rent. They also can't issue "no-cause" or "20-day" notices to month-to-month tenants unless there is evidence of a threat to health or safety.

Leaders for both the Tenants Union of Washington and the Landlord Association of the Inland Northwest told KREM on Wednesday they supported the governor's action.

"I'm very relieved for the tenants in Spokane who have been calling our office, and who are very worried about what would happen in April if they're not able to pay their rent," said Terri Anderson, the interim executive director of the Tenants Union.

In fact, said Corker, even before the government stepped in, his association asked its members not to evict tenants, recognizing that lots of people are facing financial hardship, with hundreds already out of work because of the pandemic.

"Those people need a place to stay," said Corker. "Finance should not be a reason for eviction."

The landlords were hoping for a few qualifiers on the moratorium, though. One, that it would have a definite timetable, after which the policy can be reviewed. Two, that it would leave room for landlords to evict tenants who were causing a health or safety threat. Three, that it would be consistent across jurisdictions.

"It's got to be a regional or statewide philosophy," said Corker. "We can't have a double standard for the City of Spokane and the other municipal authorities in our area."

All three qualifiers were included in Inslee's order.

Both tenants and landlords groups also agreed there should be protections for property owners as well.

"I want to protect landlords too," said Anderson. "I don't want them to lose their housing. If they lose their homes to foreclosure, then tenants don't have places to rent."

Owners got some help today from a federal order that bans foreclosures on many mortgages, namely those backed by the federal government, Fannie Mae, or Freddie Mac.

"I think we'll all come out of it," said Corker.

Both groups, often at odds over policy, said it's important that people work with each other during a time of crisis.

"This is really bigger than just a tenant issue," said Anderson. "It's really about having secure housing and allowing to people to stay safe and secure in their home when we have to be sheltered and distancing ourselves."

Despite the governor's order, Spokane City Council will still explore an expanded moratorium of its own. Theirs may aim fill in some perceived gaps of the statewide order, such as protecting tenants from evictions based on minor infractions in rental agreements.

"I worry about protecting everybody, and that it's very easy to find somebody in non-compliance if you take a magnifying glass to a rental agreement," said Anderson.

Tenants got another huge assist this week thanks to a pair of Spokane Superior Court orders, one which declared no new evictions will be processed through the court, and one which put a stay on already-ordered evictions.

The government-issued moratoriums remain relevant in light of those court orders because they apply to the actual notices given by landlords, whereas the court's decision naturally only becomes relevant if the eviction gets as far as court proceedings. Meaning, without the moratorium, landlords would likely be allowed to begin eviction proceedings during the outbreak; the tenant simply wouldn't actually be evicted until the court lifted its stay.