Airport businesses are still struggling a year into the pandemic, but other Port of Seattle industries, such as freight traffic, have seen a rebound. 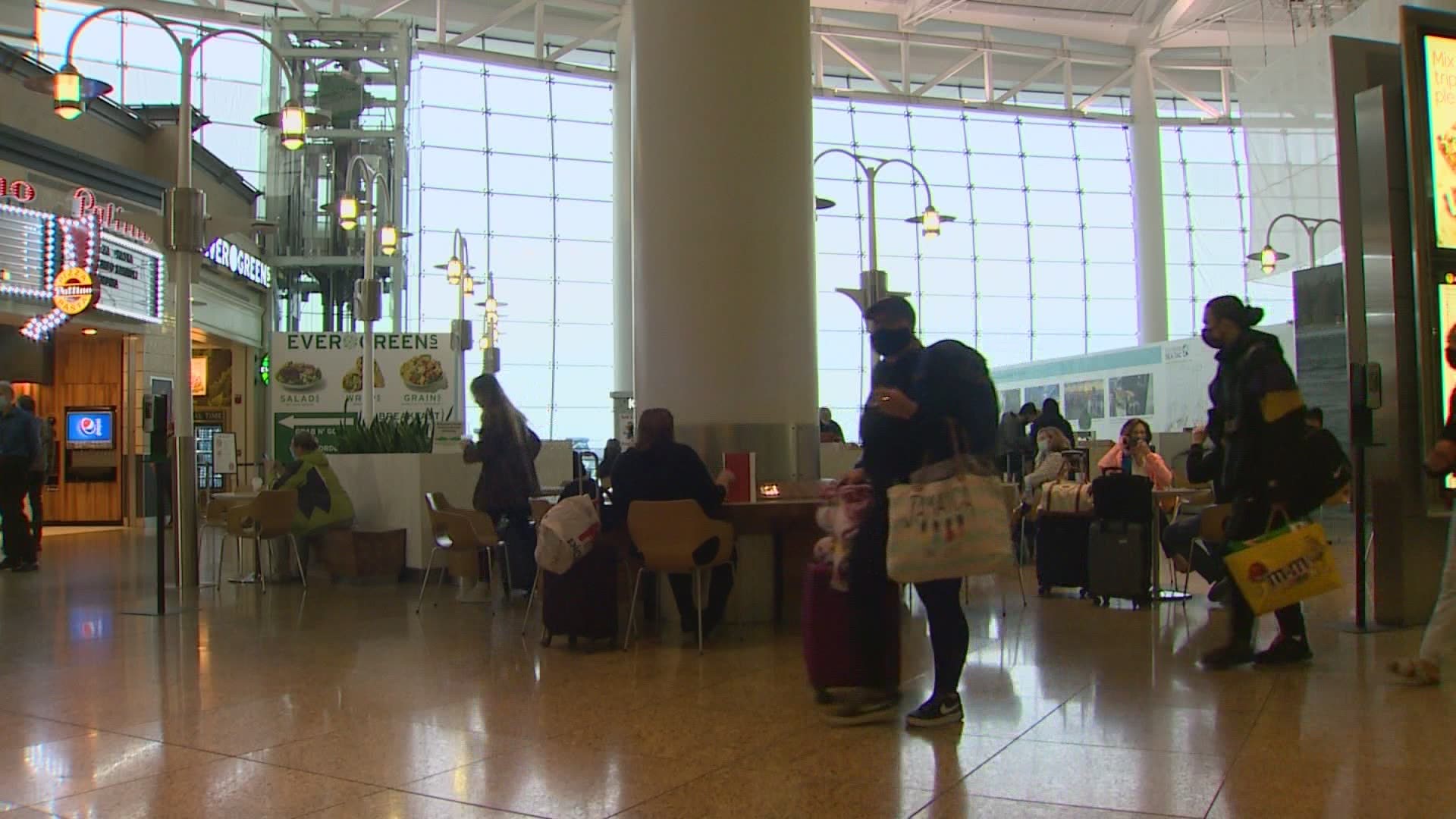 SEATTLE — The economic impacts of the COVID-19 pandemic couldn’t be clearer than at the Port of Seattle.

Sea-Tac Airport is the single biggest piece of the port. In the last of a string of boom years in 2019, Sea-Tac had grown into the eighth busiest airport in the U.S.  As COVID struck, by March and April business was down more than 90%.

And nowhere was the impact felt more than at the scores of small businesses that operate inside the airport, many of which are restaurants.

“From 67 to six employees here at Floret. I mean it was heartbreaking,” said Nat Stratton-Clarke, who owns the restaurant on concourse A.

Floret had to close entirely for weeks and is still not back up to full strength, though the dining room will soon be able to operate at 50% capacity when Washington moves into Phase 3 of reopening.

During the toughest months, options were few, said Stratton-Clarke, who owns another restaurant in Madison Valley.

“There is no indoor dining at an airport,” Stratton-Clarke said. “There’s no delivery in an airport.  It really made it so we couldn’t pivot here.”

The airport helped protect the future recovery in air travel by keeping its small business tenants alive. In 2020, at the peak of the downturn, it began deferring rent. Initially, the plan was for four months, but as the pandemic dragged on, that deferral was extended to April 2021. As a public agency, the rent cannot be forgiven, but leases have been extended to give businesses a chance to recoup.  The final configuration of how much needs to be paid back is still in discussions, according to airport spokesperson Perry Cooper.

“We all live and die by traffic,” said David Montanaro, managing partner for Pallino in the normally busy central terminal.

Passengers, flight attendants and pilots all stop by to grab food before heading to their flights, and their numbers dropped dramatically. Pallino was able to stay open but had to cut hours and lay off two-thirds of his staff.

Without help from deferred rent and other cost breaks, Stratton-Clarke thinks the airport would have seen every small business close. Right now, the port says no businesses have gone out of business, and some have yet to reopen. Stratton-Clarke for one is now bringing employees back on.

The port is considered an economic engine, a jobs generator. It has taxing authority in King County, though most airport revenues are self-generated through leases, facility charges on airlines and other sources of revenues, including parking.

Only about 2,000 people are employed directly by the port, whether they work at the airport, the seaport or elsewhere. A study commissioned by the port in 2017 found that 44,000 worked directly at the airport, including people at restaurants. Off-site, the airport claims it supports another 100,000 jobs from people working the front desk at area hotels to freight forwarders.

The port says it doesn’t have a good way to directly measure the number of lost jobs due to the pandemic. However, it knows from restaurants that had to eliminate virtually their entire staff and contractors providing airfield services, like fuel, which saw jobs decline 50%.

The number of port-related job listings is now back up by 50%. Although, some of those listings are for multiple employees.

The biggest disappointment is the cruise business to Alaska, which the port values at $900 million. The 2020 season was completely wiped out, which impacts downtown Seattle from nights booked at hotels before and after the cruise to dining out to buying things at stores.

Despite the vaccine going into more arms, including people over 65 who make up a large share of the cruise clientele, the Canadian government is preventing the 2021 season from starting. Under complex rules under the Passenger Services Act, a cruise ship flying a foreign flag cannot transport passengers directly between Seattle and another U.S. port in Alaska without making a foreign stop first.

The port is budgeting for a 25% season hoping some accommodation with Canada can be worked out in time to save the back quarter of the season. Hope is not lost, and Alaska’s congressional delegation is working on a fix.

But the port is not without its upside.

“I think we really have to be looking collectively to the future,” said Port of Seattle Commission President Fred Felleman, who warned against dwelling too much on the downturn.

After a sharp drop in passenger traffic last spring, there has been some recovery. The largest number of passengers are expected to go through Sea-Tac Airport this weekend since before the pandemic hit in March 2020.

Freight traffic across the docks in Seattle has rebounded after a 15% to 20% downturn.

Seaport cargo facilities are operated by the Northwest Seaport Alliance with the Port of Tacoma. Felleman hopes to see more shipping lines move business up from clogged ports in southern California where ships must wait at anchor to dock.

The demand for products as we’re all stuck at home is blamed for the increase, though many of the containers are sent back immediately to Asia to be reloaded with more electronics and other expensive goods. This is hampering U.S. agricultural exports like apples and other normally containerized exports to make it to Asia.

But there are other moves to bring more business in through the airport and out to locations around the state.

“Now we are working with the Washington Tourism Alliance to focus on domestic travel,” said Felleman. “Especially places like Port Angeles with national parks and other forms of safer outdoor recreation to try and bring people out.”

The port is looking to make grants to rural communities to help generate traffic for the port, its businesses and those communities.

The grant program, which Felleman said could lead to a future of eco-tourism, is about to enter its next round.

“It’s new ground for the port,” he said.