SCRAPS says the cat's pelvis and right hip were dislocated. His odds of recovering were 50/50. 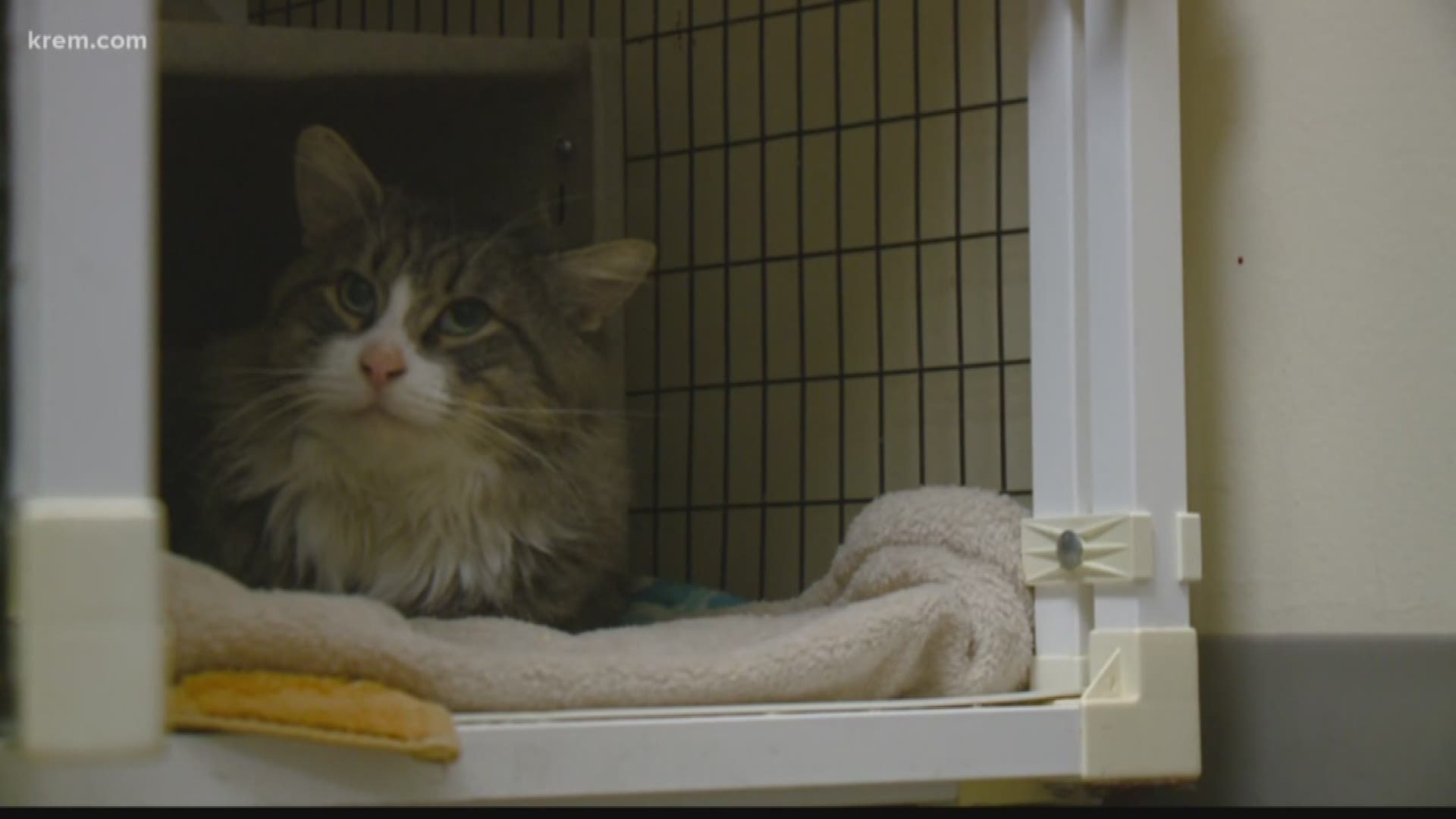 SPOKANE, Wash. — Good news for Sylvester the cat! The Spokane County Regional Animal Protection Service (SCRAPS) says the cat that was brought in last week with severe injuries is eating and standing, and doing much better than before.

Sylvester was brought to the shelter on Tuesday, Oct. 15 after suffering “brutal physical abuse,” SCRAPS said.

The man who brought him in said the cat's name was "Achilles," but neighborhood resident, Karla Burns, said the cat has been known to the in the area for years as "Sylvester," and that's what SCRAPS is now calling him.

Sylvester had a dislocated hip and pelvis. SCRAPS said the injuries are more consistent with physical abuse than being hit by a car, and the agency is investigating the abuse.

New X-rays next week will shed further light into how Sylvester is healing, but his progress is a good sign.

The man who brought the cat in asked to remain anonymous. He said he saw students at Logan Elementary tormenting and kicking the cat in an alleyway.

“Even after suffering trauma and major physical injury, Achilles purred and rubbed his head in our hands,” SCRAPS wrote on Facebook when the cat first arrived.

Sylvester will be on crate rest for the coming weeks as veterinarians decide whether or not to do surgery, SCRAPS said.

Burns' mother has been feeding the cat for five years. She said she didn't think students would abuse the cat.

"He took [the cat] to SCRAPS, and I felt better, I felt like he was saved," Burns said. "Like, thank god he's going to get help."

Burns said she had called the cat Sylvester because she had seen him chasing birds in her neighborhood for the past five or six years.

"He's a beautiful cat, he's wonderful. But, he's always been a stray and he knows where the food is, so everyone in our neighborhood, our apartment complex feeds him," Burns said. "My mom's been doing it for five years."

“Only time will tell if his body can and will heal, after which he’ll need surgery to repair his hip,” SCRAPS wrote on Facebook. “We struggle to comprehend why anyone would want to hurt this sweet, innocent boy.”

SCRAPS leaders say they will not let the abuse go unaddressed, regardless of the age of the perpetrators.

Anyone with information about the abuse is asked to email SCRAPs@spokanecounty.org or call 509-477-2532.

Those who would like to donate to Sylvester's care can do so through the SCRAPS Hope Foundation.

SCRAPS
CRUELTY INVESTIGATION - Achilles needs your voice. Achilles was b... rought to us today after suffering brutal physical abuse: the man who brought him to us found him being tormented and kicked by children in an alleyway.

RELATED: Neighbors work to save dozens of feral cats before East Central home is demolished