SPOKANE, Wash. — You may have seen it driving around Spokane on city roads or Interstate 90.

Lorentz said he has always been a fan of muscle cars and exotic cars, which paved the way for the idea of the boat car.

When asked why he decided to build it, his answer was simple and quite possibly unexpected: “I don’t even know why. I thought it would just be really cool.”

With $700 in his pocket, Lorentz originally bought a 1993 Chrysler LeBaron convertible. Then, he bought a boat and took both vehicles to Newtech Skills Center, where he teaches special education.

“I had six kids and my wife didn’t want me to spend much money on my weird projects. I needed to find a cheap convertible,” Lorentz said. “Chrysler LeBarons are not necessarily convertibles that people want. I had owned several Chrysler LeBarons, and they were fairly inexpensive and fairly reliable.”

Lorentz set out to work on the project without any plans on paper, which he said was scary when looking back now. The entire conversion process took three days, with two of those days reserved for cutting off the bottom of the boat.

His wife was unaware of the process over those three days, which Lorentz recounts with humor.

The boat car has many of the features of typical cars, including cruise control, air conditioning, a steering wheel and power windows.

About five years ago, Lorentz revamped the boat after purchasing a 1992 Chrysler LeBaron convertible. The changes included blue interior and a blue stripe on the side.

“I’m just an overgrown kid is what I am. It’s just totally fun is what it is,” Lorentz added.

He said the expenses over the past ten years have been worth the smiles and laughs LaBoata has brought to the Spokane community.

“Man, pretty cheap for ten years. I couldn’t buy a car that would have that much fun and enjoyment. It’s a kick in the boat,” he said.

One question he receives often: Does the boat float? The short answer: No.

“If I could build something that would maneuver and float, I would be pretty incredible,” he said while laughing.

LaBoata is not just used for Lorentz’s personal enjoyment. He also provides rides for charity and recently took a child with cerebral palsy on a trip for his birthday.

“That’s what kind of redeems the whole boat thing because she [my wife] does not like it,” Lorentz said with a laugh.

But it has not always been easy. Lorentz said he faced pushback from the state Department of Motor Vehicles when the boat first hit the streets of Spokane. During the past eight years, the department has not given him much trouble, he said.

Lorentz’s love of boats and cars has also extended to other areas of his life.

About four years ago, Lorentz mounted a speed boat in his backyard pool. He has also converted his desk at work into a replica that resembles the boat car.

Photos: LaBoata through the years 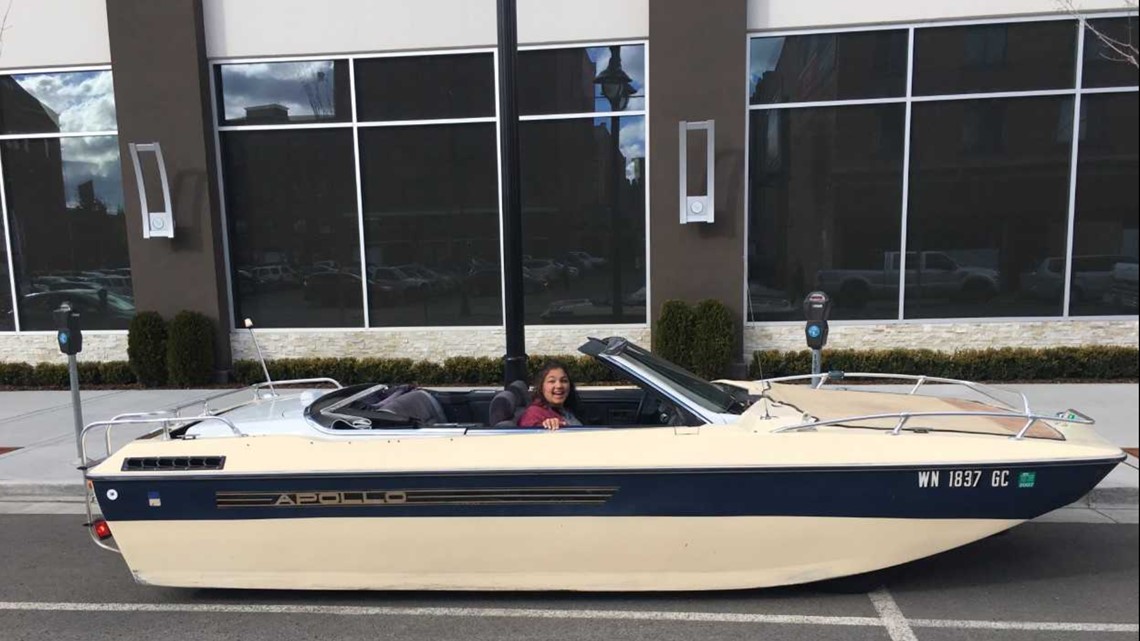 “I tend to look at life a little different and I’m quirky with the things I do. It just makes life more fun,” he added.

On May 28, a TV crew from A&E Network will spend a whole day with Lorentz. He said he is unsure about what they will do with the interview.

Lorentz constantly sees videos and photos of himself and LaBoata in the news, or memes circulating around the Internet – though his friends and family usually show those to him since he does not have a Facebook account.

More recently, he said his and his wife’s phones blew up after a LaBoata meme floating in Spokane's recent floodwaters went viral on Facebook.

The meme with a photoshopped image of LaBoata in the floodwaters read, “Today is your day Spokane boat car.”

“Somebody was really paying attention there,” Lorentz added.

Also see: Meet the man behind the 'You Matter' signs in Spokane