Near the Hamilton exit, the crumbling ruins of a world class park are slowly reclaimed by nature...

You probably drive by Liberty Park just under Interstate 90 all the time. The City of Spokane put thousands of dollars behind one of its first public parks park years ago, but now all that is left is a pile of rubble.

The park used to be one of Spokane's treasures. Historians said that it was even nicer than Manito Park. Now it is mostly just overgrown weeds, and passersby would have no idea that in the first year it was built, the amount of money that went into the park would be equivalent to $300,000 today.

The trash, overgrowth, and crumbling rock is all that is left of Liberty Park; a landmark now turned to ruins.

"It was a beautiful spot. You see the pictures, it just looks outstanding. You would never believe that was here," said historian Tony Bamonte.

Bamonte has spent months researching Liberty Park and its beginnings in 1897.

In the early days, Liberty had a country club whose members didn't mesh well with the neighborhood.

"They were working class people and they did not hit it off with the wealthy," said Bamonte. "It was not a good fit." 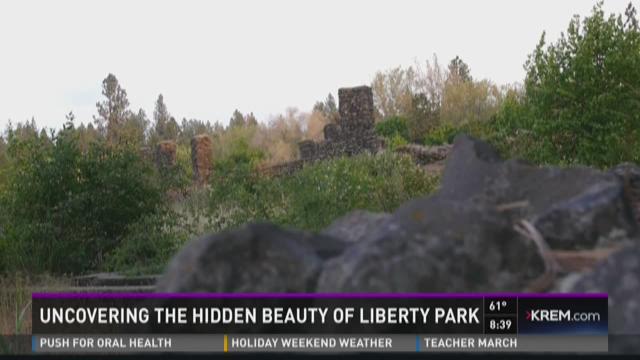 Within a few years, the country club and greenhouse both moved to Manito, but Liberty remained a popular destination. Though it still had its share of problems.

"This was probably the most dangerous park they have ever had, mostly because of the cliffs," said Bamonte.

And it had a lake that was just too expensive to maintain.

"They city stopped doing any work and it was neglected," said Bamonte.

In 1965, city officials decided the cheapest freeway route would be straight through Liberty Park. And now, 50 years later, Liberty Park is among Spokane's best ruins.

"Nature has taken it back the best it could, but it is never going to take back these rock walls," said Bamonte.

There is still a lot more to this place than just trash and debris. Not only was this Spokane's second public park, it also held the city's first public playground.