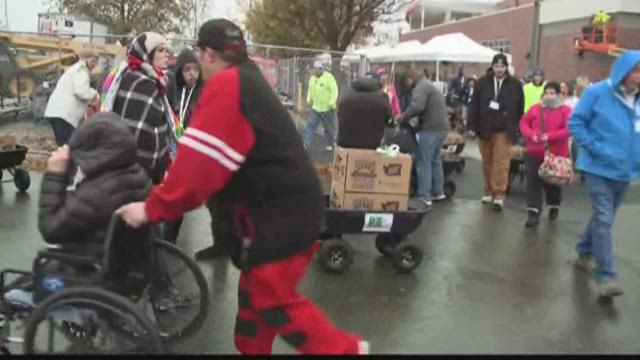 The 18th annual Tom's Turkey Drive wrapped up another successful campaign this year by providing 11,000 complete Thanksgiving meals to families across the Inland Northwest. The drive also raised significant funds for 2nd Harvest to help families with food assistance throughout the year. 2nd Harvest distributes food to over 250 neighborhood food banks and meal centers in 26 counties in Eastern Washington and Northern Idaho.

Thousands of families will be able to serve dinner and make memories because of the generous supporters of Tom’s Turkey Drive. The two-day event hosted by KREM 2’s Tom Sherry at local Rosauers Supermarkets was a huge success. Area shoppers, donors and local businesses all contributed to provide 11,000 holiday meals.

Each Tom’s Turkey Drive meal cost $20 and is packed with a turkey and all the trimmings: half gallon of Darigold milk, Franz stuffing mix, a five-pound bag of fresh potatoes, Franz dinner rolls, Starbucks VIA instant coffee, canned yams, gravy mix, cranberry sauce, and two cans of vegetables. Darigold donates 11,000 cartons of milk and Franz donates all the rolls and stuffing. We were excited to have Lamb Weston donate an apple crisp topping for each meal as well.

The majority of the meals were distributed at the Spokane Veterans Memorial Arena on Tom’s Turkey Tuesday, November 21. During Tom's Turkey Tuesday, hundreds of volunteers helped to distribute thousands of meals. The event was open to the public and thousands gathered to pick up their family’s Thanksgiving meal.