Power outages are prompting concern about other essential services, too. 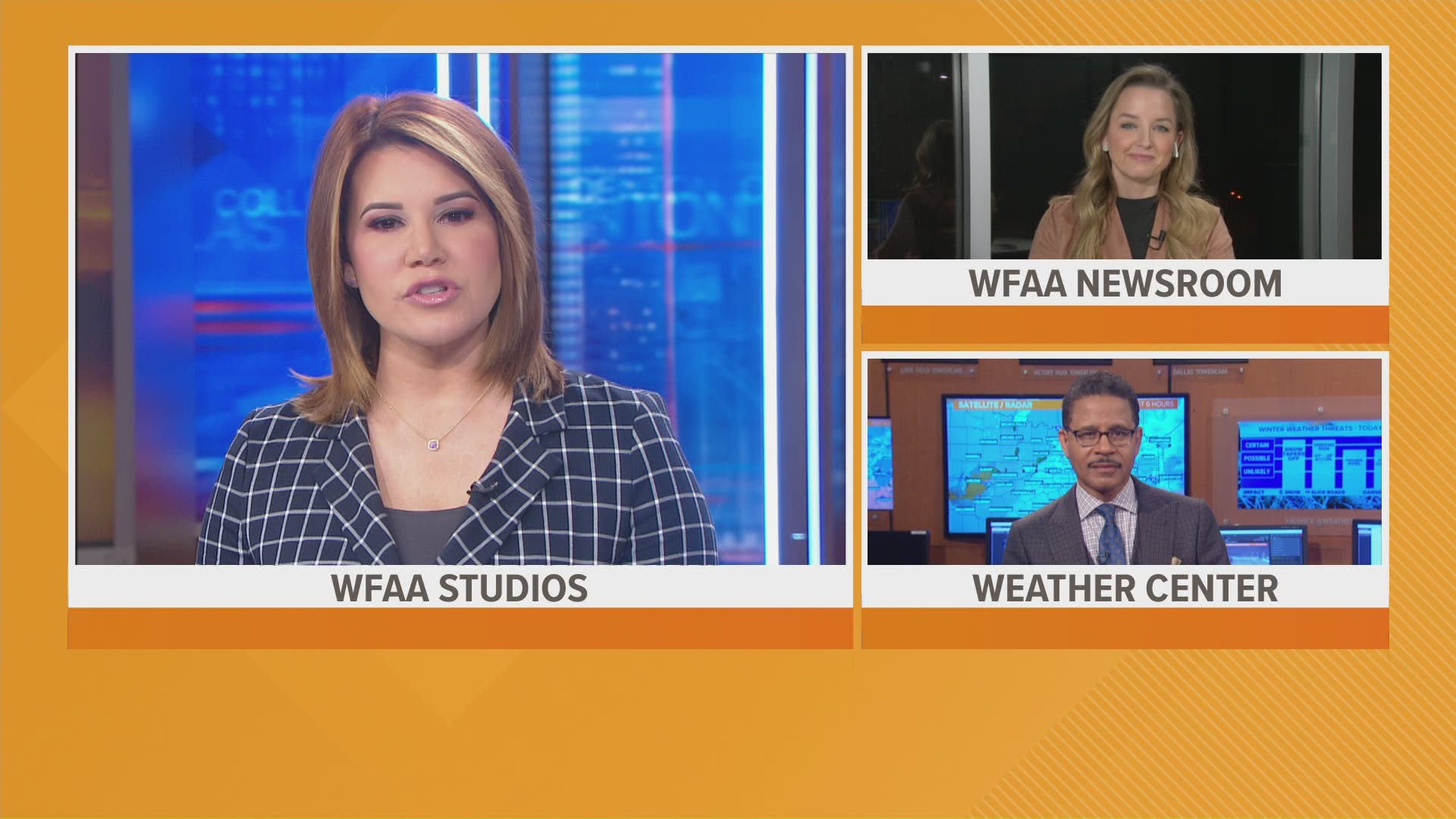 This story will be continuously updated as new information becomes available.

Millions of people across the state of Texas were still without power Wednesday as officials urge Texans to conserve as much electricity as possible after dozens of power plants went offline during record cold and heavy ice and snow.

Hundreds of thousands of homes are under a boil order after power outages at water utility facilities and loss of water pressure on Monday. Many of the homes have lost water entirely. Fort Worth is asking people who are able to donate bottled water at any of the city's fire stations.

In addition to conserving electricity, officials with water and natural gas utilities are also asking Texans to practice conservation of those resources as power outages place additional pressure on the services.

Many school districts have announced closures due to the weather and outages, including Dallas and Fort Worth ISDs, which said they would be closed Wednesday and Thursday.

RELATED: How to stay warm in extreme cold if your power goes out

Remember to download the WFAA app for the latest need-to-know weather and power updates. You can also check one of our dozens of local radars near you, the latest forecast, weather cameras and current conditions.

Most of the snow totals we are seeing right now from around the Dallas-Fort Worth area range from 1 to 3 inches. Some locations along the Red River with 5 to 7 inches.

Dallas-Fort Worth International Airport received another inch of snow overnight and this morning. This brings the total for February to 5 inches of snow! We still have a week and a half left in the month, but it looks mainly dry or all rain through the end of the month.

The 5 inches of snow puts February 2021 the fourth snowiest on record.

Officials are urging Texans to conserve electricity as the grid faces unprecedented demand from the extreme cold and a lower-than-normal electrical generation due to offline coal and natural gas facilities, as well as frozen turbines.

Many cities in North Texas are under notice to boil their water prior to consumption, including when washing their hands/face, brushing their teeth and drinking water.

The cities impacted include:

Texans under the orders should boil their water for at least two minutes prior to drinking it, washing with it, or brushing their teeth, according to officials. Water should be boiled vigorously and then cooled before it is consumed.

The Texas Speaker of the House has called for a hearing on the statewide power outages.

Speaker Dade Phelan, R-Beaumont, asked the House State Affairs and Energy Resources Committees to hold a joint hearing to review what led to the massive power supply drop-off that has caused all the outages statewide.

“The extreme winter weather Texans experienced this week caused the lights to go off across the Lone Star State,” Phelan said in a news release. “I’m asking these two vital committees to convene a joint hearing on Feb. 25 for the express purpose of helping Texans understand what went wrong and how we can prevent these conditions from happening again."

Phelan said he wants to know what steps regulators and grid operators need to take.

“The statewide blackouts raise questions about the reliability of our electric grid and its ability to withstand extreme weather events in the future," Paddie added.

Atmos Energy sent out a message Tuesday asking all of its customers and businesses to conserve as much energy as possible.

Demand for natural gas is currently at "unprecedented levels," according to an Atmos Energy spokesperson.

The natural-gas-only company is one of the nation's largest distributors. The Dallas-based company serves about 3 million customers in more than 1,400 communities in nine states.

At the same time, officials in local communities across North Texas are urging residents to only use water as needed and to conserve as much as possible. As power outages continue to plague water facilities, there is concern of the possibility of complete water outages.

Cities asking for residents to only use water for drinking, sanitation and dripping faucets so far include:

Cell towers around North Texas for all different providers are experiencing similar power loss issues to the ones Texans are facing in their homes. Those cell towers have backup generators and backup batteries, but even those can sometimes fail, causing connection issues for some Texans.

RELATED: Can't call or text because of the storm? Try these tips

"Commercial power outages and damage from snow and ice may affect service for some wireless and wireline customers," AT&T said in a statement. "We have generators supporting cell sites and we have teams refueling fixed generators as needed."

There have been thousands of flight cancellations and delays in the Dallas-Fort Worth area as the area deals with the wintry weather. Officials are urging any passengers to confirm their flight status before departing for the airport.

Check for delays and cancellations:

Check a full list of all delays and closures here.

Many vaccine clinics across North Texas are closing or rescheduling due to the weather. Below are some that have announced closures.

Texas Department of State Health Services said the number of COVID-19 cases and deaths reported will be low due to power outages across the state.

Health officials said they cannot update lab and testing data at this time.

The transit service has moved to Operating Scenario 2, which means all rail operations will be suspended and DART bus routes will operate on normal Saturday schedules for the first few days of the week, with limited service scheduled on routes 63 and 362.

The Dallas Streetcar will not operate during this time, but a shuttle bus will be available between EBJ Union Station and the Bishop Arts District, making all stops. The transit service is also now providing 14 additional shuttle bus routes, which can be viewed here.

Passengers with questions can call customer service representatives at the following phone numbers:

TRE announced it will be suspending service through the beginning of Thursday due to winter weather conditions in North Texas.

Officials said for any TRE passengers connecting to DART services, rail operations are also suspended until the beginning of Thursday.

TRE said DART shuttle buses will be available for passengers. These bus routes can be viewed online under the "Operating Scenario 2" section.

People can register for TRE alerts or DART alerts for the latest updates and service changes.

City facilities will be closed while many employees work remotely. Garbage pickup is canceled Wednesday with plans to potentially resume Thursday.

All non-emergency city facilities will continue to be closed.

Non-essential city facilities will be closed Wednesday. The city's non-emergency police phone lines have been damaged. The alternate non-emergency line to call is 817-485-6669. 911 is still working.

All Tarrant County governmental buildings will be closed on Wednesday.

All North Texas DPS offices will be closed Thursday.

North Texas DPS will be closing ALL DPS Offices in the North Texas Region on 02/18/21. The 42 counties (Reg. 1) affected by this closure may be found on the DPS Regional Map. https://t.co/6U3OPTE1uj Driver License customers with appointments will be contacted to reschedule. pic.twitter.com/X6stm9W7y8

Drivers can find information on road conditions throughout the state on DriveTexas.org or by calling 800-452-9292.