Spokane has completed its full-city plow. Here's what to do if your block was missed

Spokane completed its full-city plow on Thursday morning, meeting the city's goal of finishing it in less than three days. 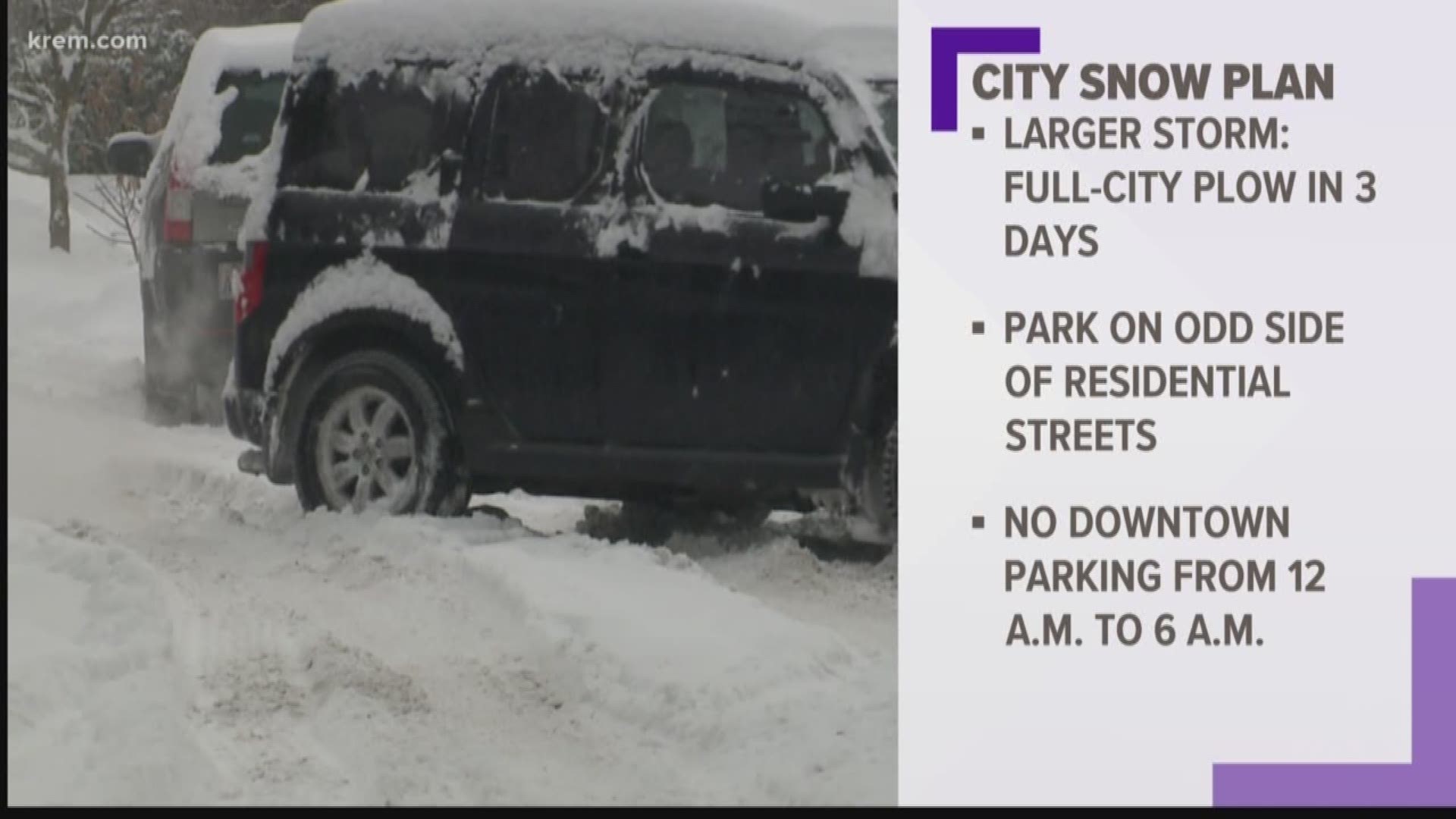 SPOKANE, Wash. — The City of Spokane said on Thursday morning that it has completed a full-city plow after a winter storm that arrived on Valentine's Day brought heavy snowfall to the Inland Northwest.

Spokane's South Hill picked up four inches of snow on Monday and other areas in the Inland Northwest received more. More snowfall is expected to arrive in the region from Thursday night into Friday morning. Crews are prepared to respond to new snow expected on Thursday and in the coming days, City of Spokane spokesperson Marlene Feist said.

Spokane launched its full-city plow on Monday, Feb. 15, an effort that happens when there is at least four inches of snow on the ground. It was completed in the early morning hours of Thursday, Feb. 18, meeting the city's goal of finishing the full-city plow in less than three days.

Snow crews will be out on Thursday to clean up areas that need additional work, Feist said. Residents who note that their block was missed by plows can call 311 to report it.

RELATED: Another round of snow arrives for Spokane on Thursday before warmup

A map showing the plowing routes for residential areas in the City of Spokane is also available online.

The following is a list of maps to check plow progress in areas outside of the City of Spokane:

The City of Spokane's Street Department has outfitted 17 pieces of equipment with gates that allow plow drivers to avoid placing snow across driveways or alley access points.

These gates reduce driveway berms in residential areas, but they are still possible, especially on main roads that are frequently plowed.

Crews will plow away from the curb to help keep snow away from driveways and sidewalks. Snow may also be pushed to the center medians in some cases.

Spokane residents are asked to park on the odd side of the street in residential areas for the snow season, which runs through March 15.

Recreational vehicles, boats and trailers must be moved off the street to winter storage locations.

Announcements will be made to prohibit on-street parking in downtown Spokane from midnight to 6 a.m. when it snows, so parking bays can be plowed out.

Signs are installed in the downtown area, indicating this rule within the boundaries of Maple to Division and I-90 to the Spokane River. Vehicles parked during prohibited times are subject to towing.

Here is a list of snow removal hotlines in the Inland Northwest:

Property owners remain responsible for clearing the sidewalk adjacent to their properties. The city is asking citizens to clear a 36-inch path to allow people with disabilities, bus riders and other pedestrians to move safety through the community. The goal is to complete that work by 9 a.m. after a snowfall.

The City of Spokane will remove sidewalk snow adjacent to its properties, too.

Seniors or disabled individuals can call 311 to help get connected with volunteer services that may be able to help them with snow shoveling.