Snowfall on Thursday morning quickly led to problems on the roads throughout the Spokane area, with multiple crashes and slide-offs reported. 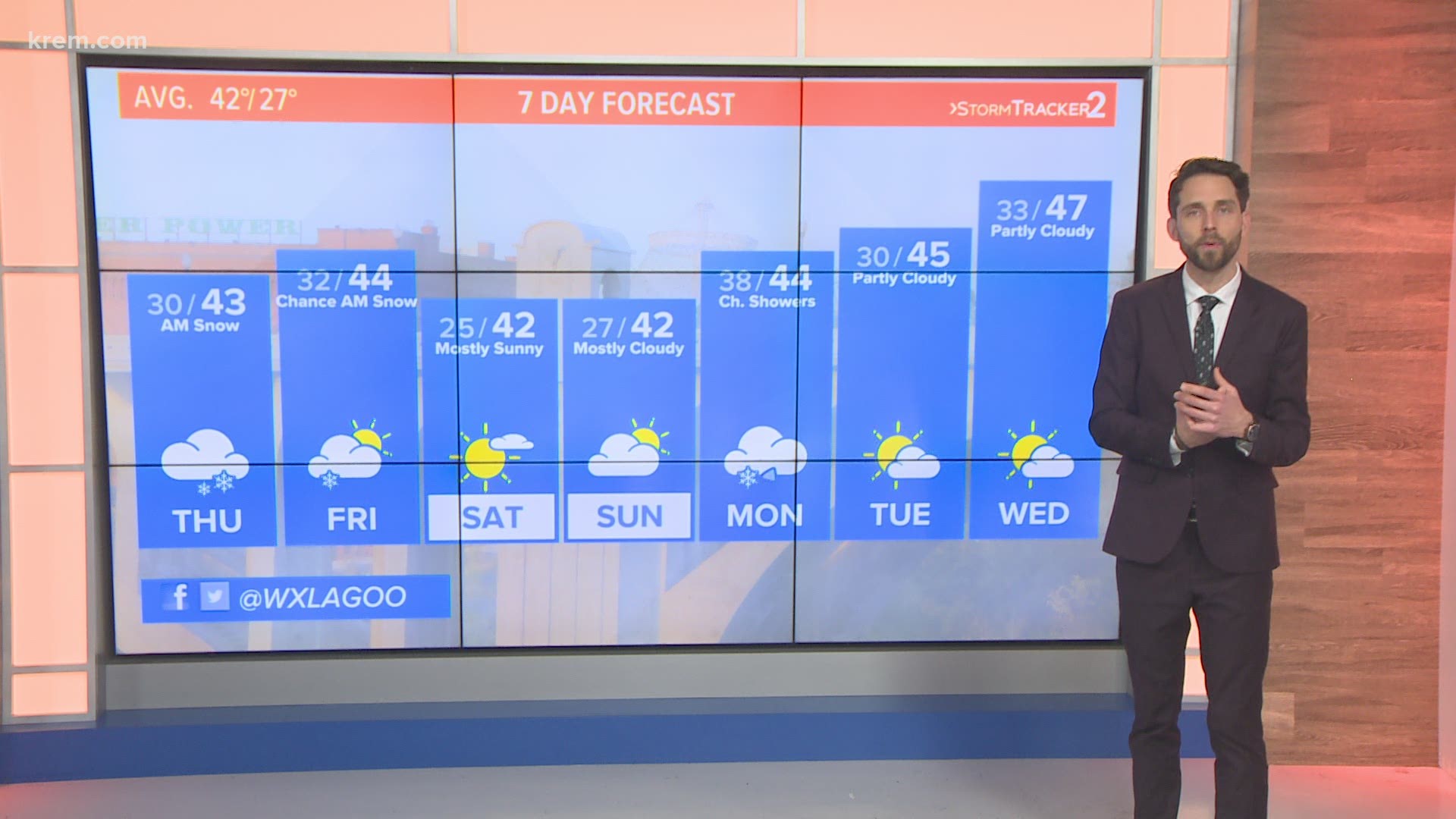 SPOKANE, Wash. — Snow is quickly melting in the Spokane area on Thursday after arriving just in time for the morning commute, snarling traffic on I-90 and other roads in the area.

Winter Weather Advisories have expired for Spokane, Coeur d'Alene, Sandpoint and Pullman, but an advisory remains in effect for Wallace, Idaho. Many areas in Spokane County picked up about two inches of snow, according to snowfall reports from the National Weather Service, while areas of North Idaho saw between four to five inches of snow.

The snowfall quickly led to problems on the roads throughout the Spokane area on Thursday morning. The Washington State Department of Transportation's Eastern Region tweeted just before 7:15 a.m. that the commute was "off to a rough start."

A crash was blocking the right lane of eastbound I-90 between the Medical Lake and Geiger Boulevard interchanges, WSDOT East tweeted at about 8:45 a.m.  The crash involved a semi-truck and several other vehicles, including a semi in the median, right lane and shoulder.

Drivers also reported blowing snow west of Spokane on Thursday morning. There were also several crashes and slide-offs in downtown Spokane amid heavy snow in the area.

Idaho State Police also wrote on Twitter that I-90 was "extremely slick" and authorities responded to multiple crashes, including some of Fourth of July Pass. Police ultimately blocked traffic at milepost 24 on I-90 in both directions at 10:09 a.m. The eastbound lanes reopened about one hour later but all westbound lanes apart from one remain closed.

Mountains across the Northwest are set to get even more snow on Thursday. Winter Storm Watches are in place along the Cascade Crest for as much as 12 to 30 inches of snow above 3,000 feet. In the Northern Rockies as much as a foot of snow will fall on Thursday.

Avalanche danger in the mountains is still present despite the lack of any official warnings. With additional snow in the forecast, it is likely the avalanche concern will grow on Thursday. Avalanche potential and snow roads will make for treacherous conditions up and over the mountain passes of the Northwest.

Chasing the snow-dropping front is some more gusty wind. Wind will be out of the south at 20 to 25 miles per hour with gusts around 45, similar to what we saw on Monday.

As the snow winds down a few isolated rain showers will spread across the lower elevations of the Inland Northwest. With temperatures near 40 degrees in the afternoon, it’s just too warm to get any more snow.

The lingering snow sticks to the higher elevations late Thursday and Friday.