Snow is expected to fall through most of Friday afternoon and evening in the Spokane area. Here's what you need to know about the storm. 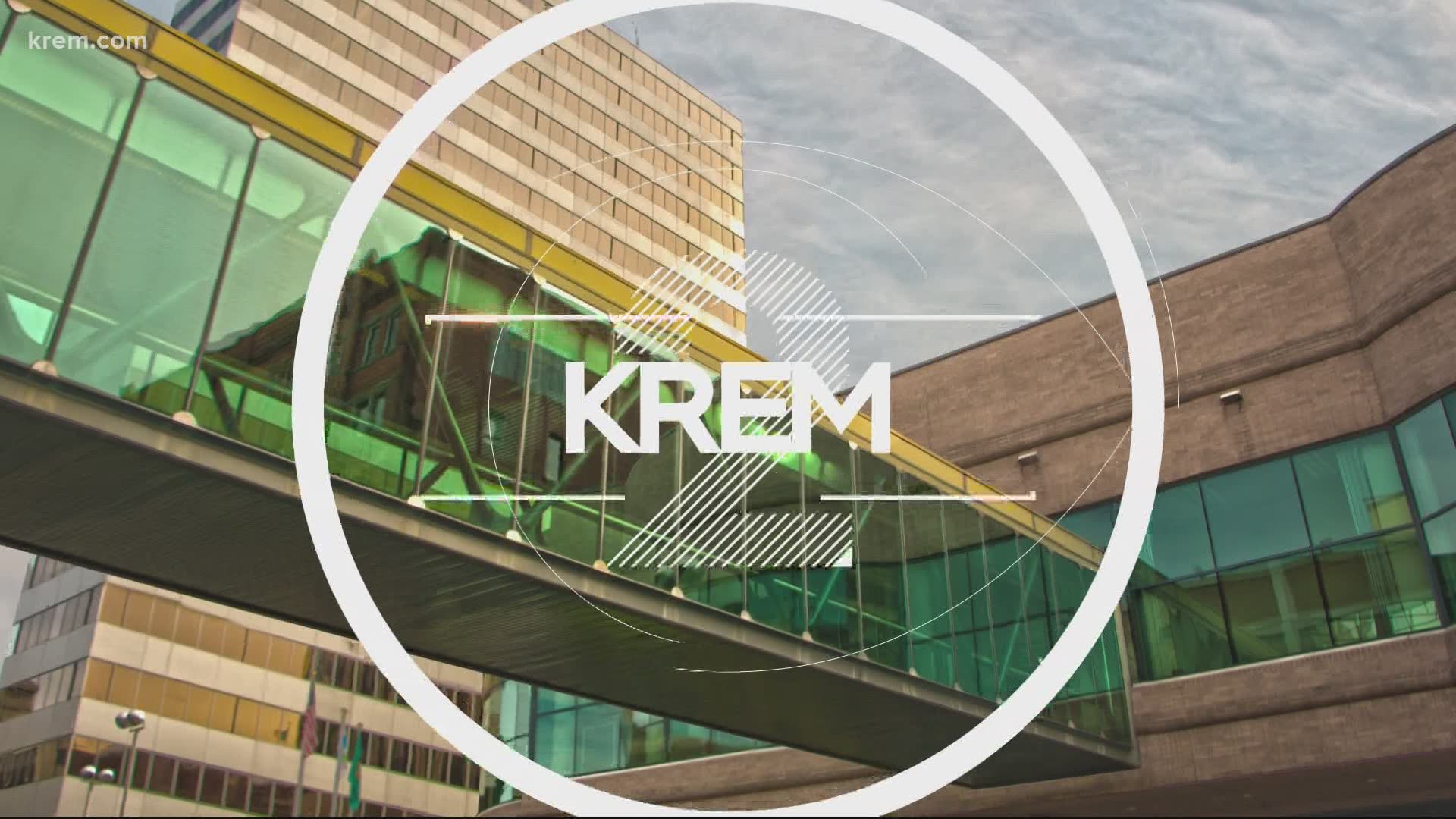 SPOKANE, Wash. — The first major snowstorm in the Inland Northwest has arrived on Oct. 23. Several inches of snow are expected to fall into Friday evening, causing potential widespread tree damage and power outages.

Here are the latest updates on the storm.

6:00 a.m. Oct. 24: Spokane breaks the record for most snowfall on Oct. 24 as well as breaking the overall snow record. Around 0.6" of snow fell at the Spokane Airport after midnight, beating the old record set when the NWS recorded a trace amount of snow in 1956.

9:20 p.m.: Washington State Patrol Trooper Jeff Sevigney says the WSP District 4 Troopers have responded to 129 crashes since 10:15 a.m. 91 of those crashes have been in Spokane County.

8:30 p.m.: Avista is reporting that more than 12,500 customers are without power as the Inland Northwest sees its first covering of snow for the season.

The outages are spread throughout Eastern Washington and North Idaho.

Inland Power and Light is also reporting 3,773 customers without power on Friday at 8:30 p.m.

Kootenai Electric Cooperative is reporting 282outages as of 8:30 p.m.

\Vera Water and Power is reporting no outages as of 4:40 p.m. on Friday.

Feist said the city isn't seeing more than four inches of snow on the streets, which is the measure the city uses. She added crews will evaluate in the morning.

5:10 p.m.: National Weather Service in Spokane says this is the second snowiest October day on record, only eclipsed by Oct. 22, 1957 when 5.9 inches of snowfall was recorded. As of 5 p.m., 4.7 inched of snow fell at the Spokane Airport.

2:15 p.m.: Avista reports over 470 customers are without power. Power is expected to be restored later this afternoon.

1:35 p.m.: The snow continues to pile up with rates close to one inch per hour in some spots. The National Weather Service in Spokane shared images of heavy snowfall in areas of eastern Washington and North Idaho at Fourth of July Pass and in Wallace.

Noon: Snow continues to increase across the region in northern Washington, Spokane area and the Idaho Panhandle. Multiple crashes have been reported in these areas.

10:30 a.m.: Snow begins falling around Spokane County, including the South Hill and Cheney, and North Idaho.

Do you have photos of snow? Share them using the "Near Me" feature on KREM 2's mobile app.

A Winter Weather Advisory is also in effect for the northern Columbia Basin including Ritzville and Grand Coulee. A smaller amount of snow is expected in these areas.

How much snow will we see?

The amount of snow expected in Spokane and surrounding areas will generally be between about two to six inches, primarily based on elevation of the cities.

Areas in Spokane that are below 2,000 feet, including downtown, can expect one to two inches of snow by Saturday morning. Higher elevations can expect anywhere from 3-6 inches.

The Silver Valley is expecting the most snow, with 6-10 inches in the forecast. Many mountain peaks will get a foot of snow or more.

There have already been reports of one inch or more of snow in north-central Washington on Friday morning.

Snow is expected to continue falling throughout the afternoon and evening.

Drivers should be prepared for snowfall during the Friday evening commute. Road conditions will be at their worst between the hours of 3 to 8 p.m. before snowfall begins to taper off, according to KREM meteorologist Michelle Boss.

Snowy, slushy, slippery and icy roads are likely as night time temperatures will be in the 20s.

Since trees experiencing peak foliage haven't dropped all their leaves yet, the heavy and wet snow may force them to do so. This kind of stress can easily lead to tree damage and power outages. This is not unlike what happened during last October's large snowfall.

A record-breaking amount of wet, heavy snow blanketed the Spokane area in early October 2019, causing tree branches to fall into the roads and on power lines.

The City of Spokane's Street Department will remove trees and large branches that fall into the public right-of-way, spokesperson Marlene Feist said. Citizens can report trees blocking the street by calling 311.

Trees that are down and entangled with power lines need to be addressed by Avista first. People should call their toll-free line at 800-227-9187 and say yes to the question, "Are you reporting an urgent issue?"

The city is not initiating a full-city plow right now but will do so if there is four inches of snow on the road.

What you should know right now:

Following the snow event, bitter cold and winds will follow. Sustained winds out of the northeast at 15-25 mph are expected on Saturday, with gusts up to 35 mph. This will result in wind chills down into the single digits and teens.

Record lows in the single digits and low teens are possible on Sunday and Monday morning.