A batch of heavy rain will follow up the severe thunderstorms that hit eastern Washington Saturday evening. 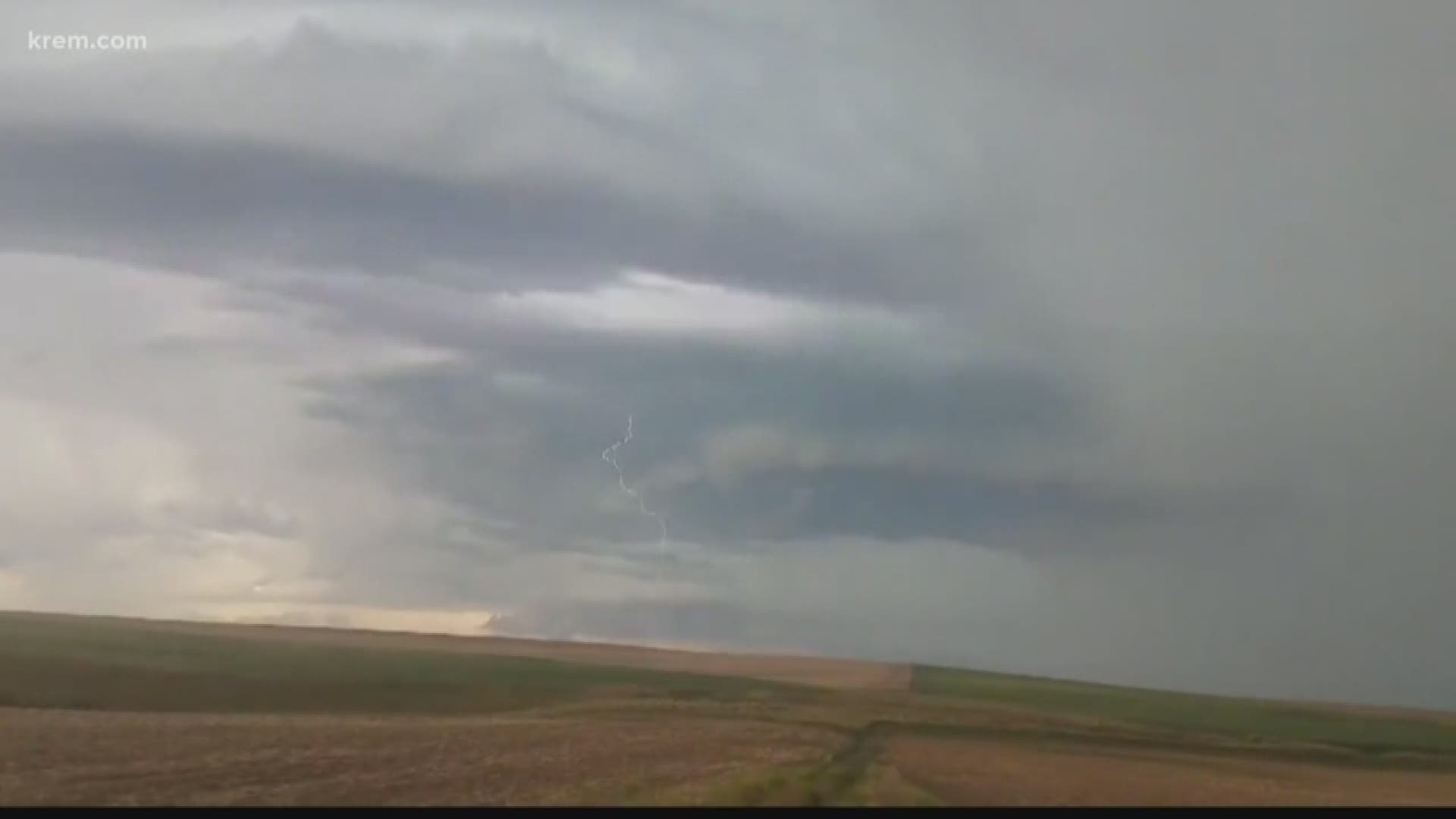 SPOKANE, Wash. — Following the severe weather on Saturday night that blasted high winds through locations between Ritzville and Washtucna, another batch of rain and storms are likely early Sunday morning.

A few showers and thunder lingered around 3:00 a.m. Sunday morning.

Between about 3-9 A.M. Sunday morning, most of eastern Washington and North Idaho will see a decent batch of rainfall and potentially thunderstorms. This is not expected to be severe. The weather will clear out by the afternoon hours.

More than 1,000 homes were without power as of 8:30 p.m. Saturday night in the Spokane area and eastern Washington, according to Avista.

As of Sunday morning, that power has since been restored.

The thunderstorms traveling north out of Oregon hit the Tri-Cities area around 5-6:00 p.m. and continued north towards Moses Lake at about 6-7:00 p.m. Ritzville and Grand Coulee would then saw storms between 7-8:00 p.m. Spokane was hit at approximately 8:00 p.m. last night. Coeur d'Alene about 9:00 p.m., but the chances for strong thunderstorms in North Idaho is much lower.

The Storm Prediction Center upgraded all of central Washington and areas east to Spokane to an "Enhanced Risk" for severe weather. This is a category 3 of a five point scale SPC uses and the first time ever we've been placed under a Level 3: Enhanced Risk.

Tap for weather radar where you are

So what does that entail? Severe weather is guaranteed. The locations in the bullseye are the Tri-Cities, Moses Lake, and Grand Coulee. Locations farther east like Spokane are at a lesser risk overall and there's a decent chance the worst thunderstorm cleared Spokane to the west without us getting very much at all.

Scattered intense thunderstorms tend to be the nature in the Inland Northwest. So not everyone will be getting slammed, but some did.

The primary risk with these thunderstorms were high winds in excess of 60 mph. That would do tree and power line damage. Large hail was possible, and so was flash flooding and a small tornado risk too.

The original tornado risk was very small, but not zero percent. Should a tornado form, winds would likely be on the order of 80-90 mph, which would do even more damage, but for an extremely small area. In the event of a tornado warning, those in the area should take shelter from the winds and resulting flying debris.

There was also a Flash Flood Watch for the eastern slopes of the Cascades plus Moses Lake from 5:00 p.m. to midnight. The severe thunderstorms will have torrential rainfall that could lead to flash flooding, especially on recent burn scars from past wildfires.

Those enjoying the warm summer weather outdoors should know when the storms may hit and be packed up before then. The worst case scenario is to be caught out on the lake during a severe thunderstorm with violent winds.

NWS Spokane says while this is the first ever Enhanced Risk for the area, the heightened probabilities with severe weather forecast on June 12th, 2006 would've been classified as Enhanced Risk by today's standards (Enhanced was not a category until 2014).

KREM 2 Meteorologist Thomas Patrick broadcasted a Facebook Live video earlier today detailing the severe weather forecast. You can catch that on replay below.

Posted by Meteorologist Thomas Patrick on Saturday, May 30, 2020