An arctic cold front passing through eastern Washington is bringing near record cold temperatures to Spokane. 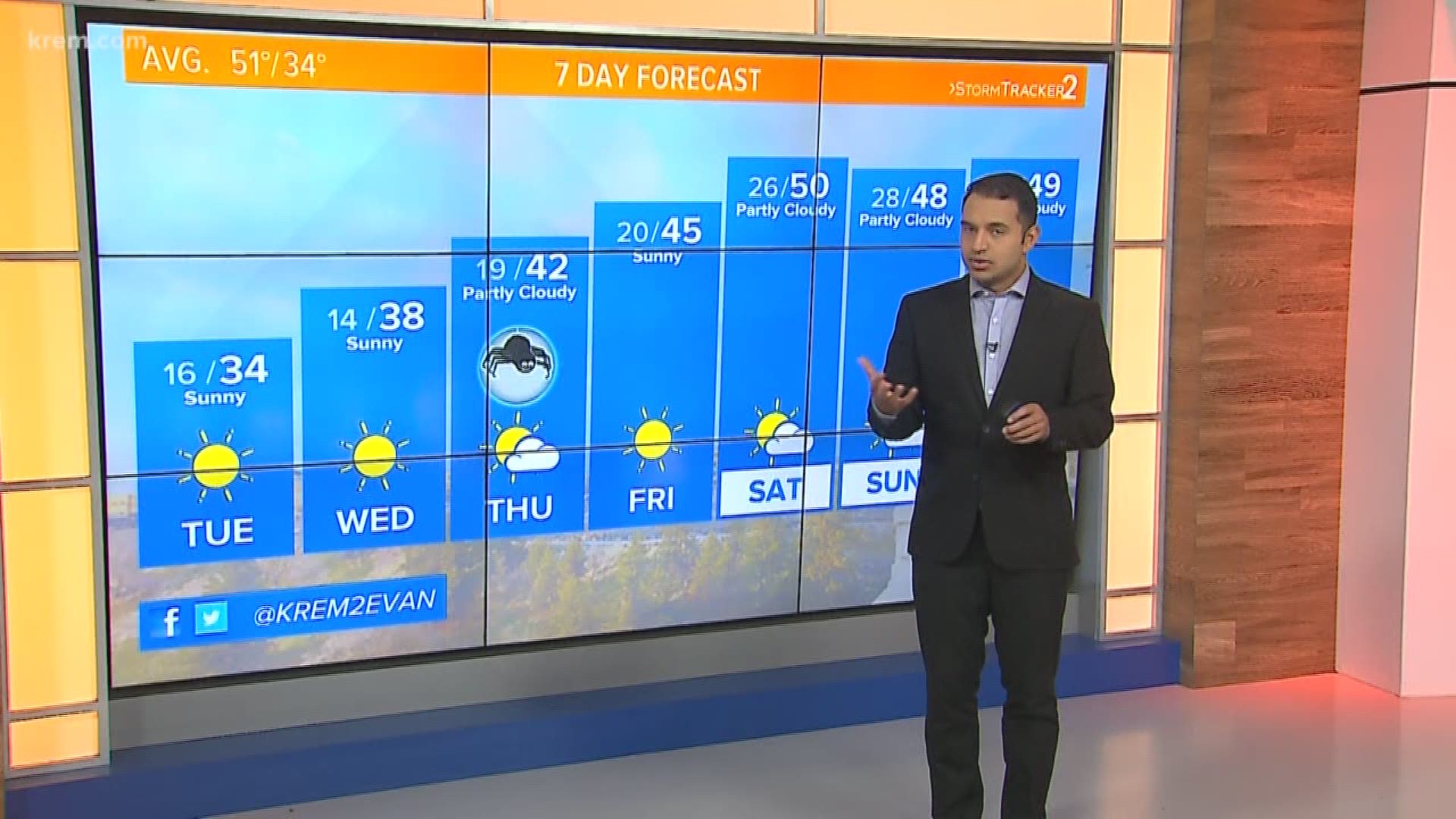 SPOKANE, Wash. — An arctic cold front passing through eastern Washington is bringing the coldest weather of fall so far on Tuesday and Wednesday.

Low temperatures on Tuesday and Wednesday mornings are expected to sit in the mid-teens and high temperatures will stay below 40 degrees.

Temperatures early Tuesday morning sat in the single digits when factoring in wind chill. KREM morning weather anchor Evan Noorani says these temperatures are 15 to 20 degrees below average and fall more in line with early December.

Tuesday morning temperatures are also about 20 degrees colder than they were at the same time on Monday, Noorani said.

The bitter cold temperatures come after the fourth Spokane snowfall before Halloween. Spokane, Post Falls and other areas around the Inland Northwest saw snow showers on Monday, Oct. 28, marking the third October day that Spokane has seen snow.

Snow flurries also fell on Saturday, Oct. 26, and a record-breaking four inches of snow fell in Spokane on Oct. 9.

Around 2 p.m., snow was spotted on the South Hill. Snow was also reported in Post Falls. Snow fell in Spokane again around 4 p.m., with reports of snow in other parts of the metro area.

The chance of precipitation dropped to 0% on Tuesday morning but the cold is sticking around with clearing skies.

Although it is only late October, these temperatures are more in line with late November and early December.

Temperatures have a good chance of rebounding slightly into Thursday but the overnight low for Halloween Day into Friday is expected to hover around 20 degrees in Spokane. This points to a good chance of mid to lower 30-degree temperatures for Thursday evening, right around prime trick-or-treating hours.

The average Halloween sees an afternoon high of 51 degrees and overnight low of 34 degrees. Most values for 2019 bring temperatures between 10 and 20 degrees below average in some regions.

The good news to deliver is skies are expected to stay dry and clear for most of the week including Halloween day. Look for partly cloudy to mostly sunny conditions during the day. However, a lack of clouds at night leads to greater cooling at a faster rate.

By the weekend, temperatures return closer to normal with highs in the upper 40s in the afternoon and upper 20s in the early morning.

Other October snow events in Spokane

KREM viewers all over the Inland Northwest reported seeing snowfall on Saturday Oct. 26, with snow even sticking in some places.