Washington State Patrol reported eight crashes in 45 minutes on a stretch of I-90 covering areas of Spokane Valley. 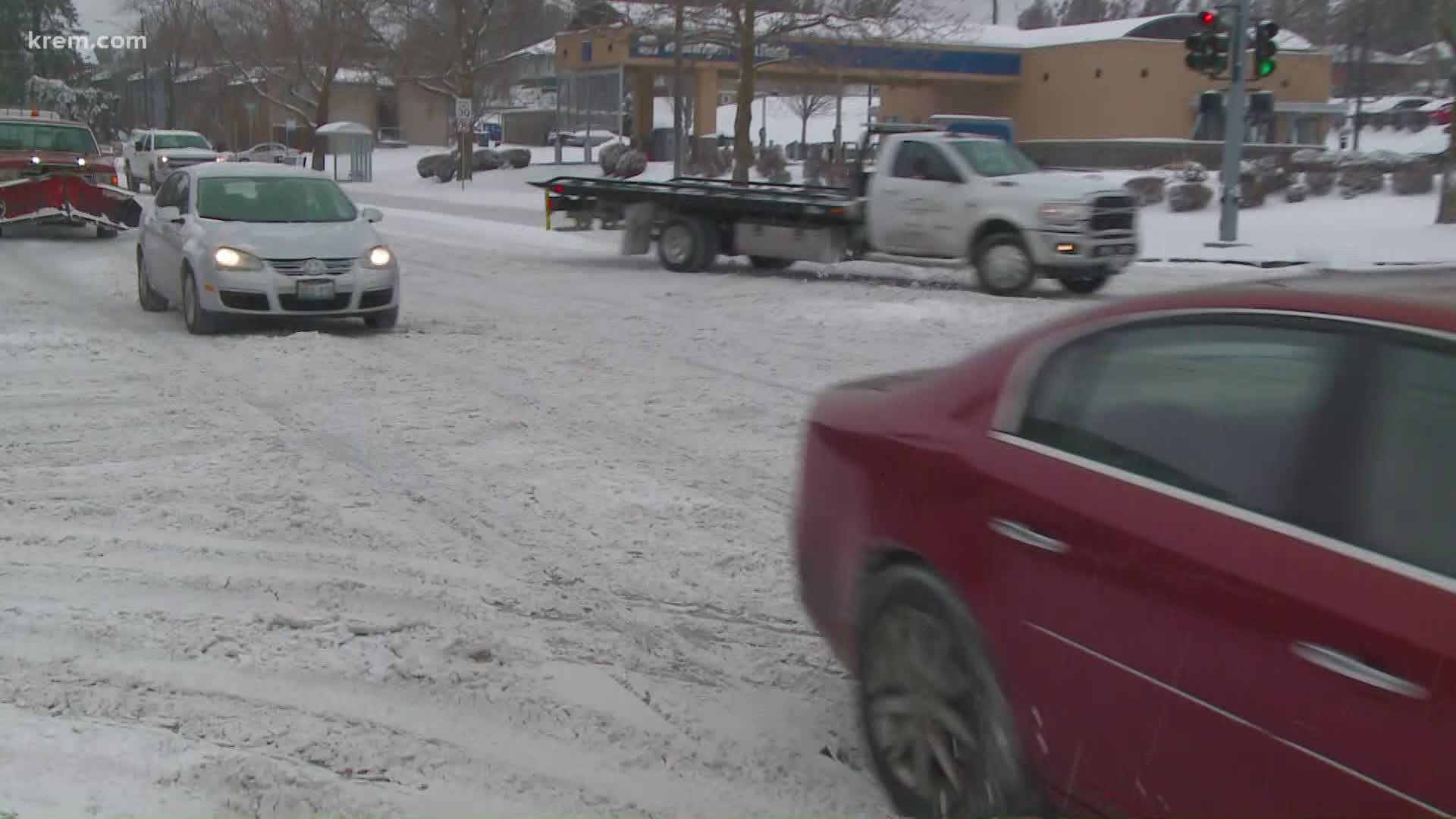 SPOKANE, Wash. — Drivers in the Spokane area are experiencing slick roads on Monday after a winter storm brought heavy snow to the area.

The National Weather Service in Spokane reported snow over the vast majority of roads Monday morning. The NWS advised drivers to use caution venturing out on the roads, as visibility is poor, and driving conditions are difficult.

A handful of crashes also snarled traffic on I-90, leading to blockages and backups throughout Spokane and Spokane Valley and slowing traffic throughout the region.

Snoqualmie pass is closed in both directions from North Bend to nearly Ellensburg due to heavy snow fall and high avalanche danger. WSDOT says it will remain closed overnight and they will reassess at 8 a.m. Tuesday.

The center and right lanes of I-90 are now blocked near the Sullivan interchange while emergency services attempt to tow a jackknifed semi truck and several other cars involved in a crash. Significant delays are expected in the area, according to WSDOT.

The center and right lane of I-90 are now blocked due to emergency services and tow that is on scene. Expect significant delays through the area. https://t.co/mggOZwuXOI pic.twitter.com/Mrx6xHs5ML

WSDOT also reported several crashes on other areas of I-90.

A vehicle went into the cable barrier in the median of I-90 past the Baker Road interchange but it has since been removed. There was another collision on westbound I-90 near the Broadway interchange that impacted multiple lanes but the crash has since been cleared.

In a press release, Washington State Patrol said eight crashes occurred in 45 minutes in Spokane Valley. They happened on both directions of I-90 between Argonne and Barker.

WSDOT is asking drivers to slow down and leave following room between themselves and other cars.

Snow and road preparations in Spokane

he city launches a full-city plow when there is at least four inches of snow on the ground. Crews will work 24 hours a day, 7 days a week until they plow all streets within the city. A full-city plow should take about three days to complete but additional snow could extend that time.

Teams will be deployed to residential areas in Spokane at 5:30 p.m. on Monday and they will start in hill areas.

Snow crews with the city of Spokane deiced the roads Sunday night and brought in extra crews Monday morning. Night crews stayed late and morning crews came in early so there was no gap in sanding, deicing and plowing, according to Marlene Feist with the City of Spokane. Crews were working on arterial streets with a focus on hills and bridges.

The Washington State Department of Transportation had crews out Sunday night pre-treating the roads and getting trucks ready for snow. Crews ask for plenty of space to clear the roadway when they're out on I-90 Monday morning. There are three trucks on Eastbound I-90 through Spokane.

The WSDOT East Twitter account said several cars were trying to weave in between the trucks to get around them and asked that cars slow down to give the plows space to clear the roadway.

5:23AM - Snowy roads across the vast majority of the area this morning, and more snow is on the way. Use caution if traveling today. Be prepared for difficult driving conditions and poor visibility. #wawx #idwx pic.twitter.com/sGlUBZvDG0