'Our house is on fire': Hundreds gather for climate strike in Riverfront Park 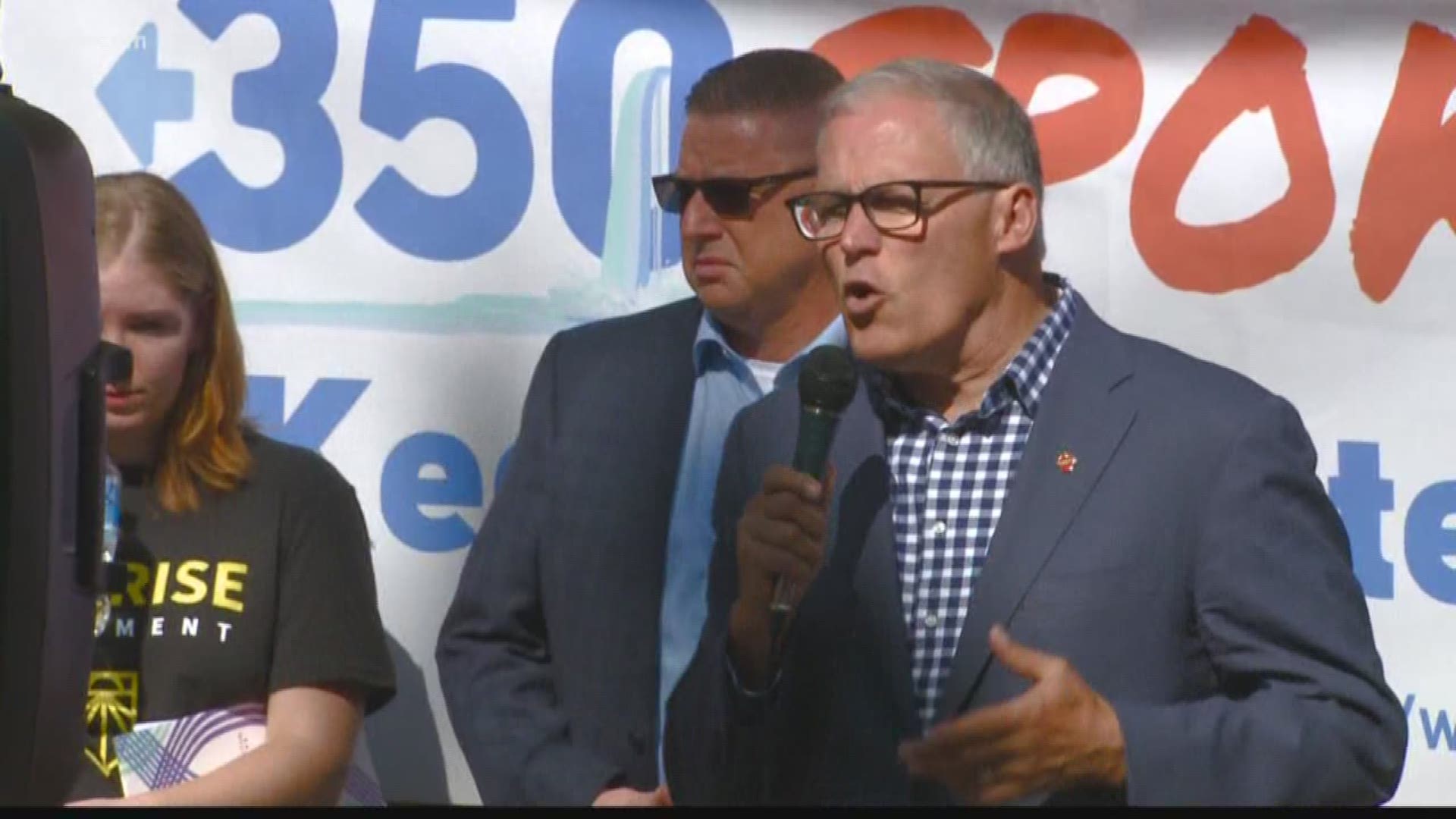 SPOKANE, Wash. — Hundreds of people gathered in Riverfront Park on Friday to take part in a global climate strike.

During the strike, Washington Gov. Jay Inslee spoke to the crowd and named teen climate activist Hope Henning the Washingtonian of the Day.

“I want to tell you that you are an inspiration to me,” the governor said to the crowd. “I hope you consider this the first day of your career in fighting for the planet, not the last day. We’re going to need your leadership now, the next year, your whole life.”

Led by high school students, the strike was aimed at pushing the world’s leaders to take substantive steps toward halting the advance of climate change.

Spokane police said their resources were stretched think after the protest turned into a "impromptu" march.

"The Spokane Police Department Special Events Office would like to remind the public how important it is to acquire permits for these type of events. Luckily no other high priority calls or serious incidents occurred while officers were dealing with this issue, but the acquisition of such permits allows both SPD and the City the time to plan and distribute the necessary resources to ensure the safety of everyone involved in such an event as well as the rest of the citizens who may call upon our assistance for other things," Corporal Teresa Fuller wrote in a press release.

Protesters, many of which are students, gathered in Riverfront Park at 11:30 a.m. on Friday. The strike officially kicked off at noon at Riverfront Park's Rotary Fountain.

Spokane Falls Boulevard closed at about 12:30 p.m. due to an influx of protesters flooding the streets – more than organizers expected.

The event organizers were 350Spokane, a local branch of international environmental organization 350, and the Sunrise Movement of Eastern Washington. They're pushing for the "Green New Deal."

Some of the signs held at the strike read "Green New Deal," "my generation will not get the luxury of dying of old age," and "so bad even introverts are here."

Watch RAW video from the strike

"One person can make a difference. All of you together here are making a difference," said Sunrise Movement coordinator Maggie Gates on Friday. "We have the solutions. It's about implementing these solutions to create a livable future."

Gates then outlined a handful of demands that the protesters echoed with chants.

“We can overcome this crisis. We need a Green New Deal. We need to respect indigenous land and sovereignty. We need environmental justice now. We need protection and restoration of biodiversity. And we need sustainable agriculture now," she said.

"Our house is on fire!" a man in the crowd shouted in response.

Rogers then called on protesters to "stand up and fight back," which they echoed with chanting and drumming.

1 / 7
KREM
Hundreds of students and protesters gathered in Riverfront Park for the climate strike on Friday.

Prior to the strike, Rogers emphasized the importance of advocating for the Green New Deal.

"A Green New Deal would encompass green jobs and radically changing our infrastructure and our food systems to basically adapt to this climate crisis," said Sunrise Movement coordinator Maggie Gates.

Gates said they Sunrise Movement staffed volunteers to walk students from some high schools to get to the event.

"It's very empowering to come together and yell and chant about what you care about and it also helps create attention," Gates said. 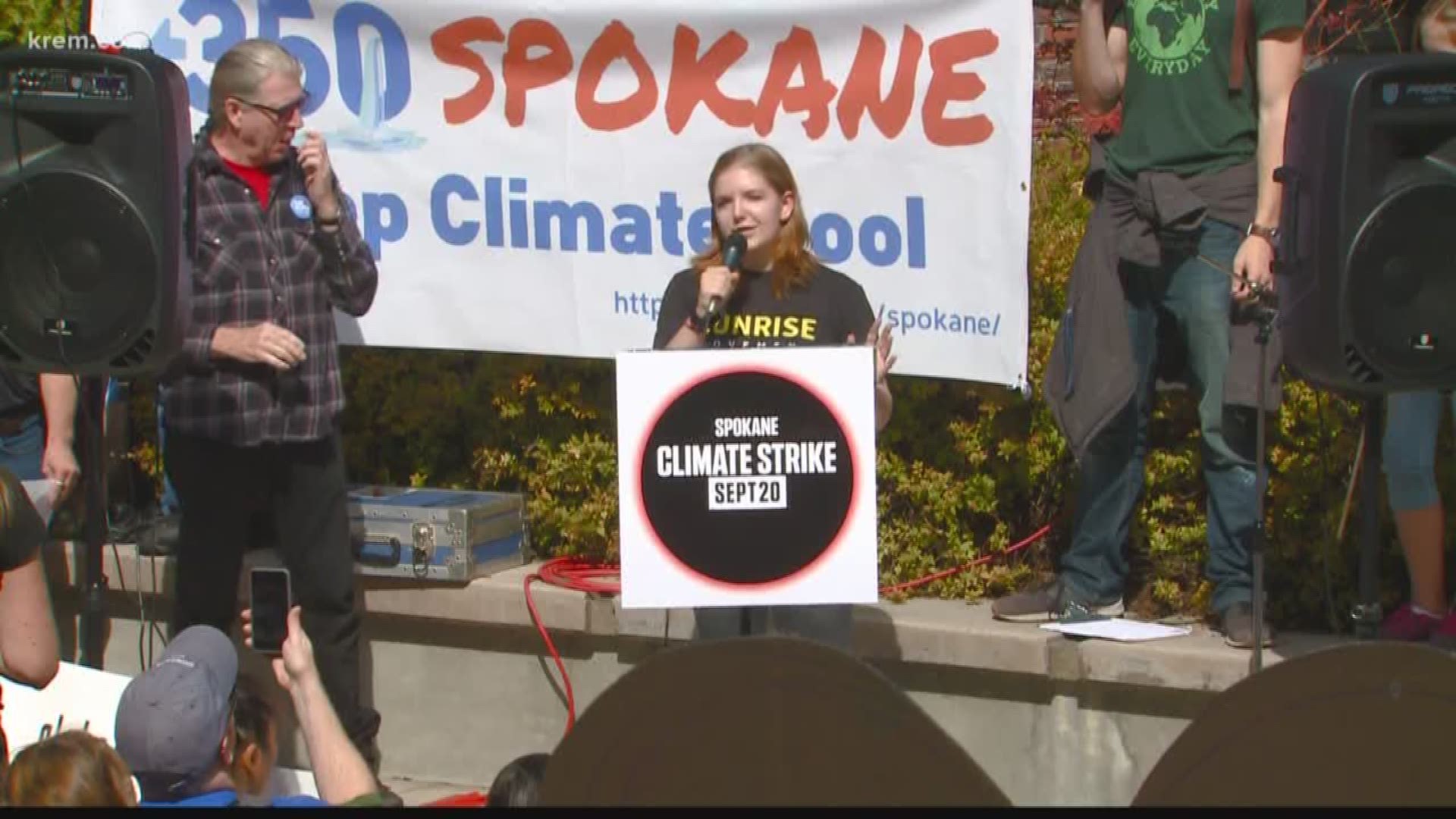 Students walk out of school

Mead students planned a walkout ahead of the strike on Friday, according to an Eventbrite page.

The event says students left school in a parade and marched to the Stop and Ride STA Bus Station on Hastings Road. Students will miss periods three through six to attend the strike.

KREM reached out to the Mead School District regarding the event. Spokesperson Jolene Andres said students will need parent permission to attend the strike or their absence will be unexcused, which is standard protocol for the district.

Spokane Public Schools students do not have a walkout publicized online but KREM did reach out to spokesperson Brian Coddington to clarify the district’s absence policy.

“Our approach is to make sure students are safe and excuse them with parent permission. That is consistent with past practice,” Coddington wrote in a statement to KREM.

Thousands of Portland Public Schools students received an excused absence to attend the rally if they speak with their teachers ahead of time.

Seattle Public School District leaders say every student who participates will receive an unexcused absence, which prompted students to attend a school board meeting on Wednesday asking them to reconsider.

RELATED: A Global Climate Strike is happening Friday. Here's what it's all about