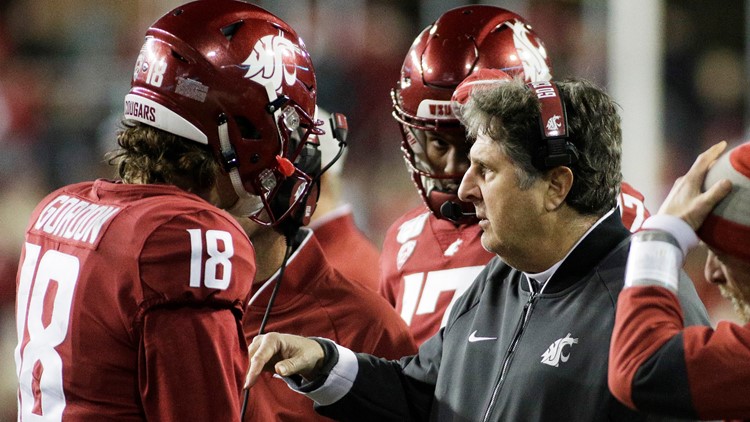 Washington State football could have been better this season.

That's what head coach Mike Leach said about the year after the Cougs lost to Air Force in the Cheez-It Bowl on Friday night.

The defense was inconsistent and the team lost three games by four points or less this season. It was an up and down year. Here are the top five season-defining moments.

We start with the Cougs on the road against Oregon.

The Ducks would end up being Pac-12 champs, and Washington State had them on the ropes.

Washington State started the fourth quarter down 11. With one minute to go, the Cougs took a 35-34 lead with an Anthony Gordon to Brandon Arconado touchdown pass.

However, the defense let Oregon march right down the field.The Ducks set up for this game winning field goal and nailed it. WSU lost 37-35.

The Cougs started off strong with its first first quarter touchdown against the Huskies since 2012.

That was about how pretty it would get for WSU.

The Cougs got in their own way for the rest of the game and couldn't keep scoring. Washington seemingly figured out the Air Raid yet again and won again.

The Huskies won its seventh straight game in this rivalry.

This felt fitting to put at number three.

It was an emotional night for his family who was there at the game.

We also saw the massive support from the South Carolina Gamecocks throughout the season where Tyler brother Ryan plays.

Ryan had a moment against Charleston Southern earlier this ear when he raised three fingers in the air to honor Tyler after throwing a touchdown pass.

Speaking of that game against Oregon State, what a game it was for the Cougs.

Then Oregon State rattled off 21 unanswered points, but the Cougs did not go down without a fight.

With 2:10 left, WSU scored to make it a five point game on a touchdown pass from Anthony Gordon to Dezmon Patmon.

The defense got a stop, and then the Cougs won the game in the final seconds with this Max Borghi touchdown.

The number one defining moment of the season came against UCLA.

Washington State was up 49-17 with a little under seven minutes to go in the third quarter and then everything just unraveled in the worst way for the Cougs.

Washington State responded on the next possession with a 65 yard touchdown pass from Gordon to BorghI.

Then after a stopping UCLA on fourth down, the Cougs had a chance to run out the clock, but Easop Winston fumbled after a catch.The Bruins turned that into a game-winning touchdown pass.

The 67-63 loss felt like the moment that changed the entire season for Washington State.

RELATED: 'It's felt like a dream': Anthony Gordon's parents reflect on son's senior season at WSU