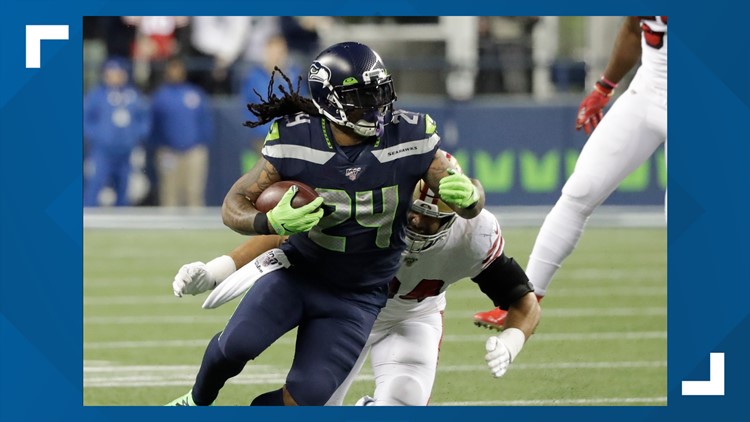 Photo by: AP
Seattle Seahawks running back Marshawn Lynch carries against the San Francisco 49ers during the second half of an NFL football game, Sunday, Dec. 29, 2019, in Seattle. (AP Photo/Ted S. Warren)

SEATTLE — The Seattle Seahawks lost to the Green Bay Packers in the NFL Playoffs on Sunday night, ending a truly wild season for the team.

NO. 5: METCALF VS. THE EAGLES IN THE NFL PLAYOFFS

Rookie DK Metcalf went off in the first round of the NFL Playoffs against the Philadelphia Eagles.

He set a league rookie record for most receiving yards in a postseason game. Metcalf had seven receptions for 160 yards and a touchdown in this game.

NO. 4: SEAHAWKS VS. BUCCANEERS IN WEEK 9

The Seahawks took a 34-27 lead on a DK Metcalf touchdown late in the fourth quarter.

The Buccaneers came down the field in no time to tie it up with 46 seconds to go. The Seahawks got in field goal range with a chance to win in regulation, but kicker Jason Myers missed the field goal attempt.

The team would get it done in overtime though. Russell Wilson threw a game-winning touchdown pass to tight end Jacob Hollister for the 40-34 win.

Hollister had just been called up from the practice squad to replace tight end Will Dissly who ruled out for the season because of injury. It was his first career touchdown.

Due to season-ending injuries to the top three running backs on the Seahawks' depth chart, the team made a call to a familiar face to help with the rushing workload.

Beast Mode made his return in a week 17 game against the San Francisco 49ers.

He scored a touchdown and the fans threw Skittles onto the field to celebrate, a throwback nod to the running back known for eating the candy on the sidelines during games.

Lynch scored four touchdowns in three games for the Seahawks.

First we have to start with this absurd throw and catch from Wilson to Tyler Lockett.

How? It looked like he was going to throw the ball away, but Lockett comes up with an insane catch.

This game got close.

In the final minutes of the fourth quarter,Wilson found Chris Carson for a touchdown to give the Seahawks a 30-29 lead.

The Rams would not go away.

They drove down the field and set up kicker Greg Zuerlein misses and the Seahawks held on to win 30-29.

This was arguably the craziest finish to an NFL game this season.

Russell Wilson threw an interception on the Seahawks opening drive, which was just his second of the season at the time. Seattle was in the redzone when it happened.

The 49ers turned that into a chance for the win, but their kicker at the time, Chase McLaughlin, missed the field goal attempt badly.

The Seahawks would win the game on a 42 yard field goal from Jason Myers to beat the rivals 27-24.

RELATED: Seahawks soar past Eagles into next round of playoffs