The Bulldogs will face the No. 4 Florida State Seminoles in Anaheim on Thursday in a bid for the Elite Eight. 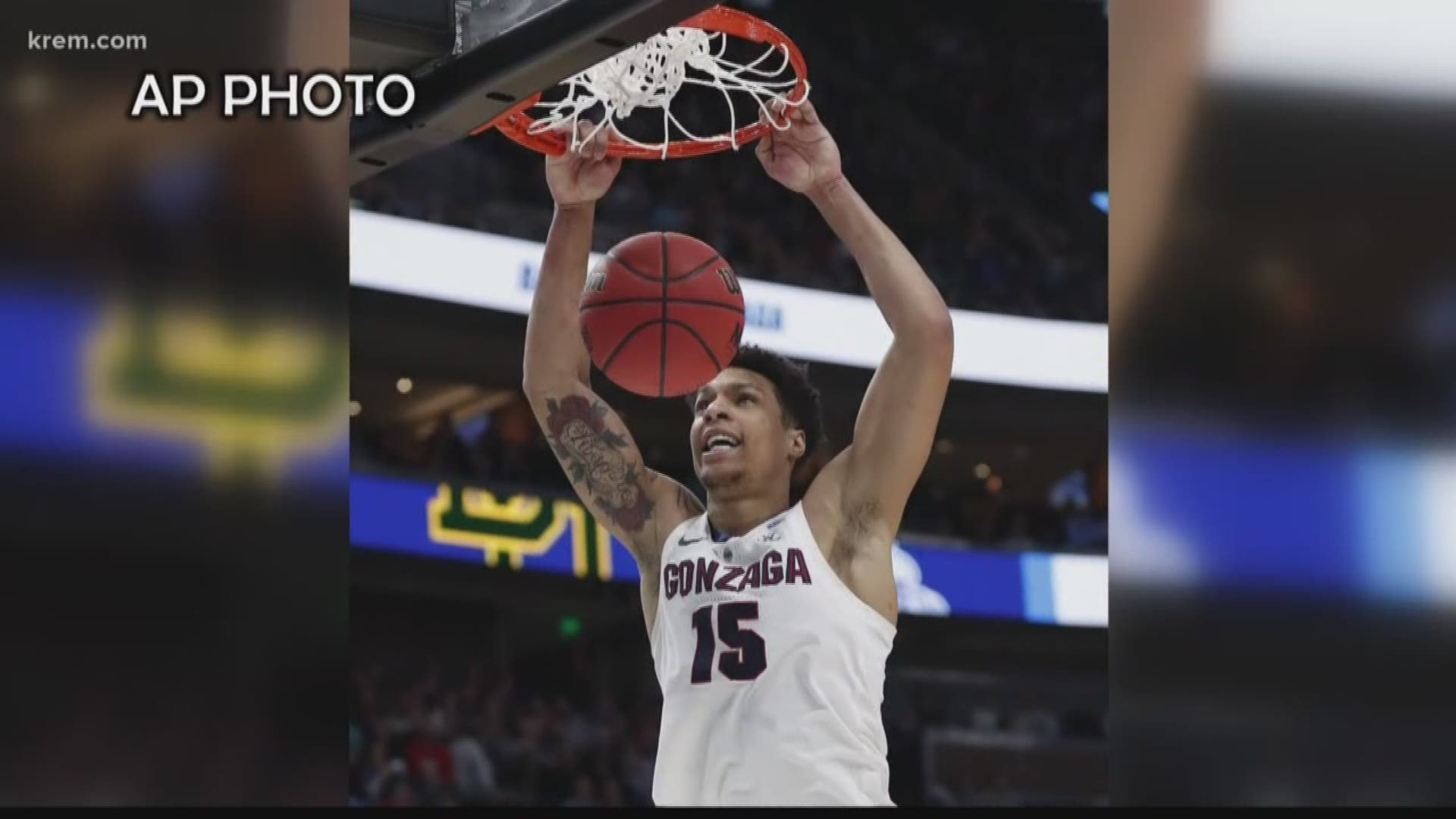 The Gonzaga forward had five monster dunks, five blocks, matched a career-high with 36 points and enjoyed the overall kind of night that earns potential NBAers millions, while leading the top-seeded Bulldogs to an 83-71 rejection of Baylor on Saturday.

This second-round matchup in the West Region wasn't exactly a blowout, but wasn't quite a nail-biter, either. That doesn't mean it lacked entertainment.

Most of it centered on Clarke, the junior transfer from San Jose State, who started the fireworks with a windmill jam on a breakaway that gave Gonzaga (32-3) an early 16-7 lead.

A few possessions later, Clarke took a bounce pass on the break from Josh Perkins for a two-handed flush that had the Gonzaga kids in the Kennel going ga-ga .

Clark's final dunk of the first half came at the end of a 5-second clinic on how to deal with Baylor's floor-clogging 1-3-1 zone. Starting at the perimeter, all five Bulldogs touched the ball in the span of those 5 seconds; it ended with Killian Tillie's hook-flip to Clarke for a jam. It was as gorgeous a display of basketball as you'll see all year and put the Bulldogs ahead 35-16. 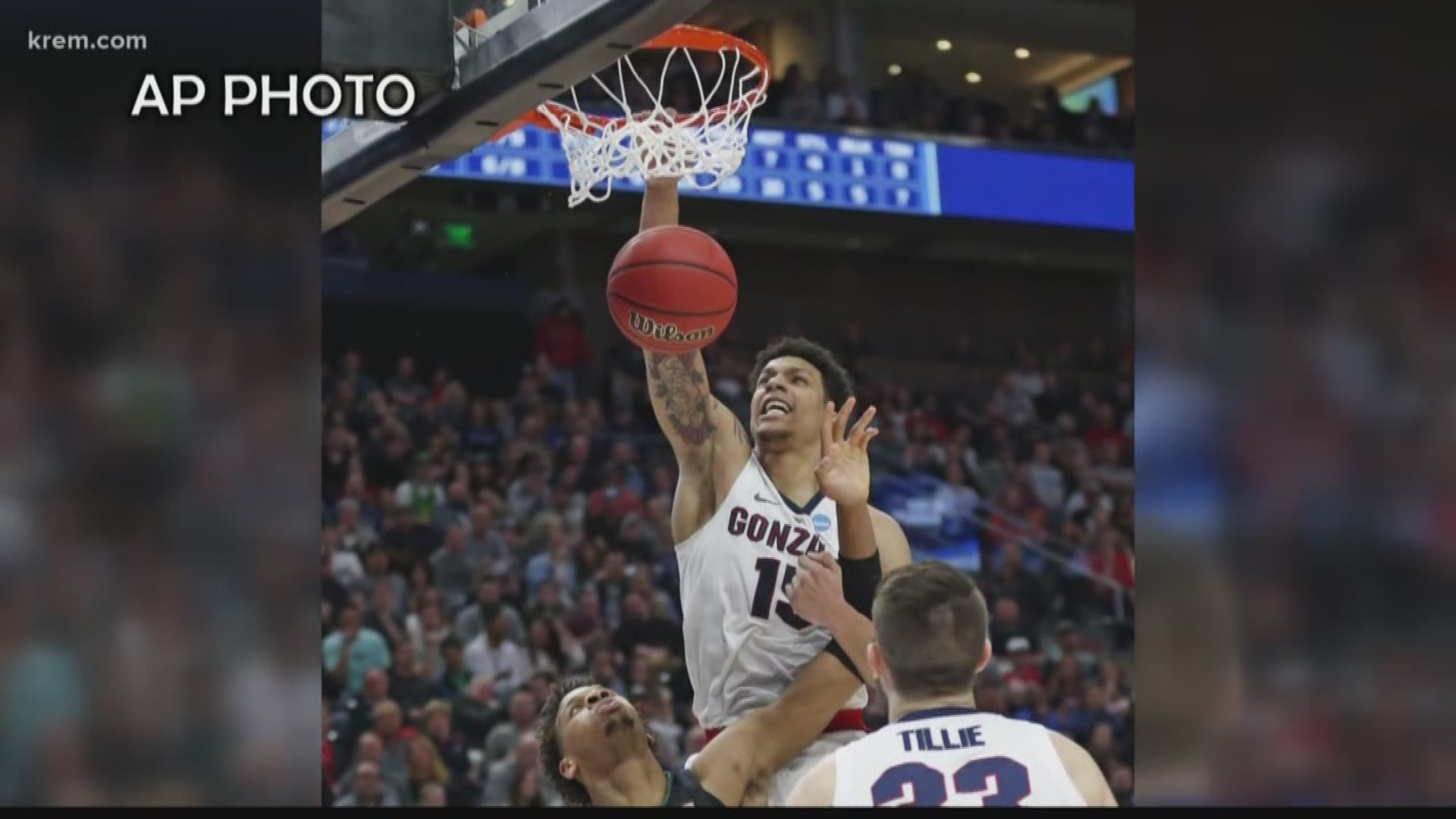 Ninth-seeded Baylor (20-14) scored the first 10 points of the second half to draw within six, and keep the game in range.

But Gonzaga held on, and when Clarke took a bounce pass from Perkins, who finished with six assists, it led to an easy bucket that put the Bulldogs up 13 with less than 4 minutes left.

Clarke also had eight rebounds and two steals. He lifted his season blocks total to 110 — now good for best in the nation.

It was the defensive prowess that put him on many NBA draft boards, though there's been a pretty large spread in opinion about exactly where he might land if he leaves after this season.

His offensive showing in this game can only help.

He went 15 for 18 from the floor, and most of the shots were of the high-percentage variety.

He could've had even more. Midway through the first half, Geno Crandall saw Clarke get daylight as he broke toward the rim, so he threw Clarke an alley-oop pass. One problem: It went in for a 3.

Gonzaga's Corey Kispert made his first four shots on the way to a 16-point night. He also got called for a technical for taunting with 8:06 left. The free throws and an ensuing three-point play helped the Bears draw within eight, but they never got closer.

Baylor's Mark Vital played much bigger than the 6-5 he's listed at. He carved out space inside and finished with 17 points and eight rebounds, but was hampered by foul trouble. He picked up his fourth with 16 minutes remaining and fouled out in the final seconds.

The Zags face fourth-seeded Florida State next Thursday in Anaheim, California. It's a rematch of their Sweet 16 game from last year, which the Seminoles won 75-60.

RELATED: 'He was the smartest kid I’ve ever coached': Jeremy Jones' HS coach reflects on his career