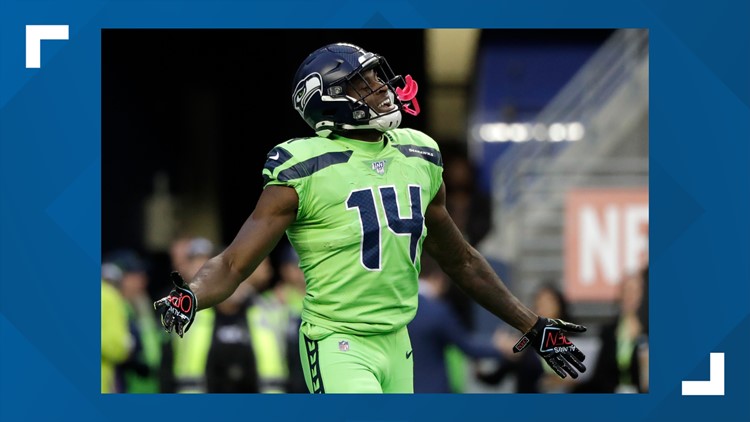 Photo by: AP
Seattle Seahawks wide receiver DK Metcalf celebrates his touchdown against the Los Angeles Rams during the first half of an NFL football game Thursday, Oct. 3, 2019, in Seattle. (AP Photo/Elaine Thompson)

SEATTLE — Seattle Seahawks wide receiver D.K. Metcalf continues to impress, but this time it's off the field.

Metcalf has donated $50,000 to coronavirus relief efforts, according to ESPN's Adam Schefter. Half of that will go to Swedish Hospital in Seattle l and the other half will go to meals to feed those in need in Metcalf's hometown Oxford, Mississippi.

Metcalf is coming off a fantastic rookie season.

He totaled 58 receptions, 900 yards and seven touchdowns in year one in the NFL. He became a consistent deep threat in the receiving game as the season went on.

Metcalf also set a rookie record for most receiving yards in an NFL playoff game against the Philadelphia Eagles in the first round of the 2019 playoffs.

Metcalf isn't the first Seahawk to give back during the coronavirus crisis.

In March, quarterback Russell Wilson and Ciara pledged to do their part by donating one million meals to Seattle Food Lifeline.

In a video, couple also encouraged people to practice social distancing in the video. They expressed concern and condolences for people losing loved ones and jobs due to the virus.

The couple ended the video by saying, "Praying for you guys. Praying for everyone out there. Love you guys."

RELATED: Life after NFL: What 5 former Seahawks are doing post-football