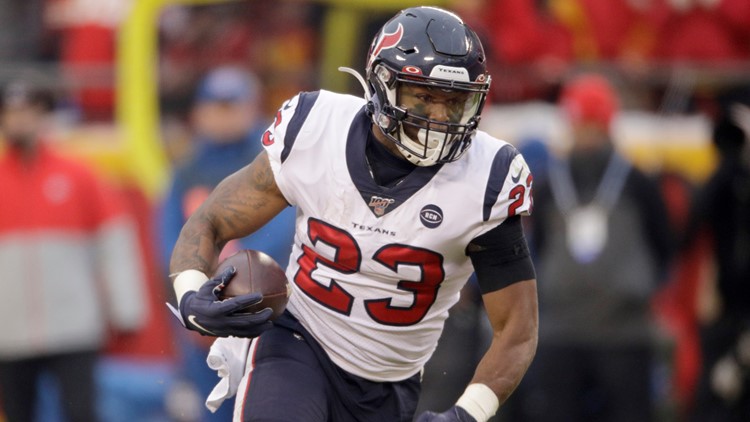 SEATTLE — It was reported on Friday that the Seattle Seahawks are adding running back Carlos Hyde to the depth chart this season.

The deal is said to be a one year, $4 million contract.

Hyde, who played last season with the Houston Texans, has had an up and down career in the pros since he was drafted in the second round of the 2014 NFL Draft by the San Francisco 49ers. Here's a breakdown of the pros and cons of the new Seahawks running back.

Hyde has the potential to be a good backup running back to Chris Carson.

All signs are pointing to Rashaad Penny sitting out to start the year after he suffered a season ending injury last season. In that time, Hyde could really help out.

He's a good runner, pass blocker and can catch passes out of the backfield. He's coming off his best season of his career as he topped 1,000 yards rushing and played in all 16 regular season games last season.

That level or production would be fantastic for the Seahawks. The team was looking to add a veteran running back to the roster that can produce.

The bad news is that last season doesn't show the whole picture.

The 2019-2020 campaign was just the second time in six NFL seasons that Hyde was available to play all 16 regular season games. He has dealt with several injuries throughout  his career that has forced him to miss games.

On top of that, last season was the first time he topped 1,000 yards, although he has come close two other seasons.

Another issue is he's coming off a season where he had four fumbles lost. That was fourth most in the NFL. The starting running back for the Seahawks, Carson, led the league in that not so great category with seven fumbles.

With the addition of Hyde, the team now has seven running backs on the depth chart.

There have been rumors about the possible addition of Marshawn Lynch. That seems unlikely now with the addition of Hyde.