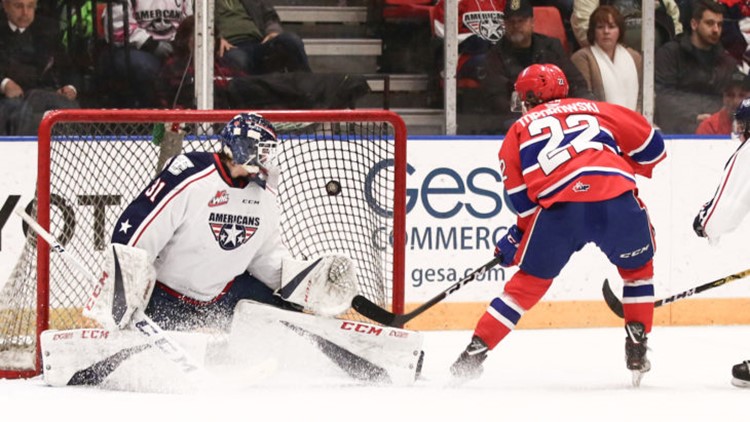 SPOKANE, Wash — Coming off one of the most successful weeks of the season, one which saw the Chiefs beat the top two teams in the U.S. Division in Portland and Everett, Spokane put their 5 game winning streak on the line as they started the week by hosting Moose Jaw in the final game of a 3 game home stand.

The Chiefs began the week 7 points back of second place Everett in the division and had a chance to move 2 points closer on Wednesday with a win over a Warriors team that had dropped 7 straight entering the only meeting between the two clubs this season.

Spokane had won 5 of the last 7 over Moose Jaw and had not lost in Spokane since 2004 to the Warriors. Moose Jaw came into the game in last place in the East, but had narrowly lost in overtime at Saskatoon in their last game on Sunday.

As for the Chiefs, they were coming off a nice 5-3 win at home over Everett, their second win over the Silvertips in the two teams last 3 meetings. Spokane started back up goalie James Porter in net on Wednesday, as he sought his third straight shut out in goal.

No Chief goaltender had ever achieved that feat, so there was definitely an air of excitement in the Arena about that as the game got underway. That excitement didn't last long, as Moose Jaw scored just 3:16 into the game off a net front rebound to take a 1-0 lead.

The Chiefs were alll over the Warriors the rest of the first period, but Warrior goalie Brock Gould was stellar in net, previewing how the rest of the game was going to go. Spokane knew all about Gould, having lost twice to him this season when he was in goal for Victoria. Spokane out shot the Warriors 24-4 in the first, yet found themselves down 1-0 heading into the second.

The Chiefs would put up 20 shots in the second, and would finally break through on Gould when Eli Zummack extended his points scoring streak to 12 in a row with an assist on Graham Sward's second goal of the season at 7:53 to tie the game at one. The shot total was now 44-9 Spokane, but the game would be tied 1-1 heading to the third.

The Chiefs would out shoot Moose Jaw 14-9 in the third, but neither team would score in the period, as Spokane and the Warriors headed to overtime. The way Gould was playing, the last thing the Chiefs wanted to do was to settle this one in a shootout as Gould had turned aside 57 shots through regulation. Spokane would do just that, as Zummack would settle things just 34 seconds into OT with his 20th goal of the year as the Chiefs would extend their longest winning streak of the season to 6 with a 2-1 victory.

It took 59 shots to do it, but the club had found a way to win once again as the Chiefs headed out on a five game road trip that would begin on Friday in Portland. Ten days earlier, Spokane had held off the first place Winterhawks with a 7-6 overtime win on a Jack Finley goal. The Chiefs had led 5-1 late in the second and 6-3 in the early third, only to see the Hawks put up 3 goals in the final 16 minutes to force OT.

Portland has the best home record in the league, having lost just once in regulation in 25 home games entering Friday's tilt. Lukas Parik, who got the win the last time out, was back in net this time around. Spokane would control the game offensively early, putting up 11 of the first 14 shots in the game. Unfortunately, the Chiefs ran into another hot goaltender as Portland's Joel Hofer turned away all 13 Spokane shots in the first. Portland meantime, would take the early lead on a Seth Jarvis goal net front midway through the first to go up 1-0 after one.

In the second, Portland scored just 1:49 in to go up 2-0. The Chiefs would respond though as Jack Finley finished off a 2 on 1 break from Adam Beckman at 3:14 to cut the deficit to 2-1. Beckman's assist extended his assist scoring streak to 8 straight games.

The Winterhawks would go back up by 2 midway through the period on a goal during a 4 on 4 to take a 3-1 lead into the third. Spokane failed on a power play early in the third, and then Jarvis scored his second of the game off an odd man rush midway through the frame to put the Chiefs away at 4-1.

The win sealed the season series for Portland as they have now won 5 of 7 from Spokane in the 8 game series. The loss also proved costly for Spokane as the Chiefs fell 7 points back of Everett for second place in the division with just 14 games remaining in the season. With 9 of those on the road, it is not going to be an easy road for Spokane.

The Chiefs didn't have any time to mope though, as the club headed to Tri City to face the Americans the next night. The Ams picked up a last second win over Moose Jaw the night before, so they were flying into Saturday's game on an up note.

James Porter got his second start of the week as he took the Americans for the second time in Tri City this season. Porter had won his first outing back on January 25th 7-2, so the Chiefs were hoping for the same kind of outcome this time around. Spokane jumped out early in this one as Ty Smith scored 4:27 into the game to give the Chiefs an early 1-0 lead. Leif Mattson then scored on the power play at 11:18 to put Spokane up 2-0.

Tri City would cut the deficit in half with a 5 on 3 power play tally late in the first to make it 2-1. The Chiefs then got a huge boost when Luke Toporowski scored short handed with 59 seconds remaining in the period to give Spokane a 3-1 lead after one. Adam Beckman extended his assist scoring streak to 9 in a row with a helper on Toporowski's goal.

Spokane then made it 4-1 in the second as Eli Zummack scored his 21st of the year 4:54 into the frame. Tri City came right back though with back to back goals just 57 seconds apart early in the period to cut the margin to 4-3 after two periods. The Americans then drew even at 4 just over 3 minutes into the third on a Jadon Joseph rebound net front. Spokane righted the ship though, as Filip Kral scored from the high circles at 10:34 to put the Chiefs back on top at 5-4.

Spokane stayed 7 points back of Everett for second in the U.S. Division, but with just 13 games remaining in the regular season, time is running out on the Chiefs to catch the Silvertips for home ice in a first round playoff series.

The Tips are now 7 back of Portland for first after their win over the Winterhawks Saturday, so things are looking more like the Chiefs will be playing Everett in the playoffs in just over a month. Spokane has a challenging schedule ahead as the club will have 6 games on the road through the Central Division over the next 3 weeks.

The Chiefs will play the first three in the Central this week as they travel to Lethbridge, Swift Current and Medicine Hat this Wednesday, Friday and Saturday. Wednesday's and Friday's games will be on 103.5 FM the Game and 1510 AM KGA, while Saturday's game from Medicine Hat will be on 94.1 FM the Bear and 790 AM KJRB due to Gonzaga basketball. Wednesday's game will be at 6 pm Pacific Time with a 5:30 pm pre-game show.