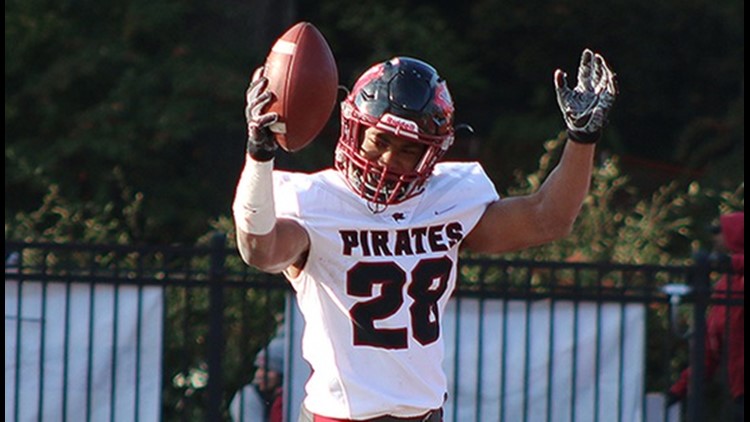 SALEM, Ore. – The 2018 Whitworth University football team capped an undefeated regular season with a 52-0 win at Willamette on Saturday.

The NCAA will announce the 32-team Division III playoff field at 2:30 pm on Sunday afternoon. Whitworth will gather as a team in the Robinson Teaching Theater (Weyerhaeuser Hall) and the public is welcome.

The Pirates didn’t take long setting the tone against the Bearcats (1-8, 0-7). Mason Elms broke free for a 47-yard touchdown run on the third play from scrimmage. Only 51 seconds into the game and Whitworth had taken a 7-0 lead.

Leif Erickson capped the Pirates’ next drive with a one-yard touchdown keeper. After forcing another quick Willamette punt, Whitworth went 61 yards on eight plays and Elms scored his second touchdown from one yard for a 21-0 lead.

The Pirates capped the first quarter with Ericksen passing 35 yards to Bryce Powers for a touchdown and a 28-0 lead. Whitworth went 77 yards in seven plays, its longest drive of the game.

The onslaught continued in the second quarter. Brayden Ayala’s interception near midfield set up a 33-yard touchdown pass from Ericksen to Brett Moser. It was Moser’s second touchdown catch of the season.

Tariq Ellis scored on a 10-yard touchdown run with 11:35 left in the second quarter, giving Whitworth a 42-0 lead. The Pirate starters were pulled at that point. Cody McDonald capped the first half scoring with a 32-yard field goal as Whitworth took a 45-0 lead at halftime.

The Pirates outgained the Bearcats 399-115 in the first half.

The only scoring of the second half was Cole Hinrichs’ touchdown run from one yard away with 1:52 left in the game. Whitworth recovered a fumbled snap on Willamette’s punt at the 17-yard line.

Whitworth finished the game with a 514-168 advantage in total offense and a 26-11 edge in first downs. The Pirates converted 6 of 12 third downs and limited the Bearcats to only one first down in 15 third down attempts. Whitworth scored on all five of its visits to the Red Zone while Willamette went 0-2.

Ericksen played a little over one quarter of football and completed 13 of 15 passes for 198 yards with two touchdowns and no interceptions. He also had his sixth touchdown run of the season. Connor Johnson played most of the game at QB and went 6 of 15 for 73 yards.

Powers led Pirate receivers with five catches for 87 yards and a score. Taylor Hall and Garrett McKay had three catches each. Along the way, McKay became Whitworth’s all-time leader in pass receptions with 250, surpassing the previous school record of 248 set by Wayne Ralph.

Second and third team players led Whitworth’s defensive statistics. Weston Kroes had seven tackles, while Chase Wilcut had two of the Pirates’ five sacks. The second and third teamers limited Willamette to 53 yards of offense after halftime. The Bucs tallied 13 tackles for loss.