Corey Kispert scored 16 points and Ryan Woolridge had 15 for Gonzaga (28-2, 14-1 WCC), which rebounded from its loss at BYU on Saturday. 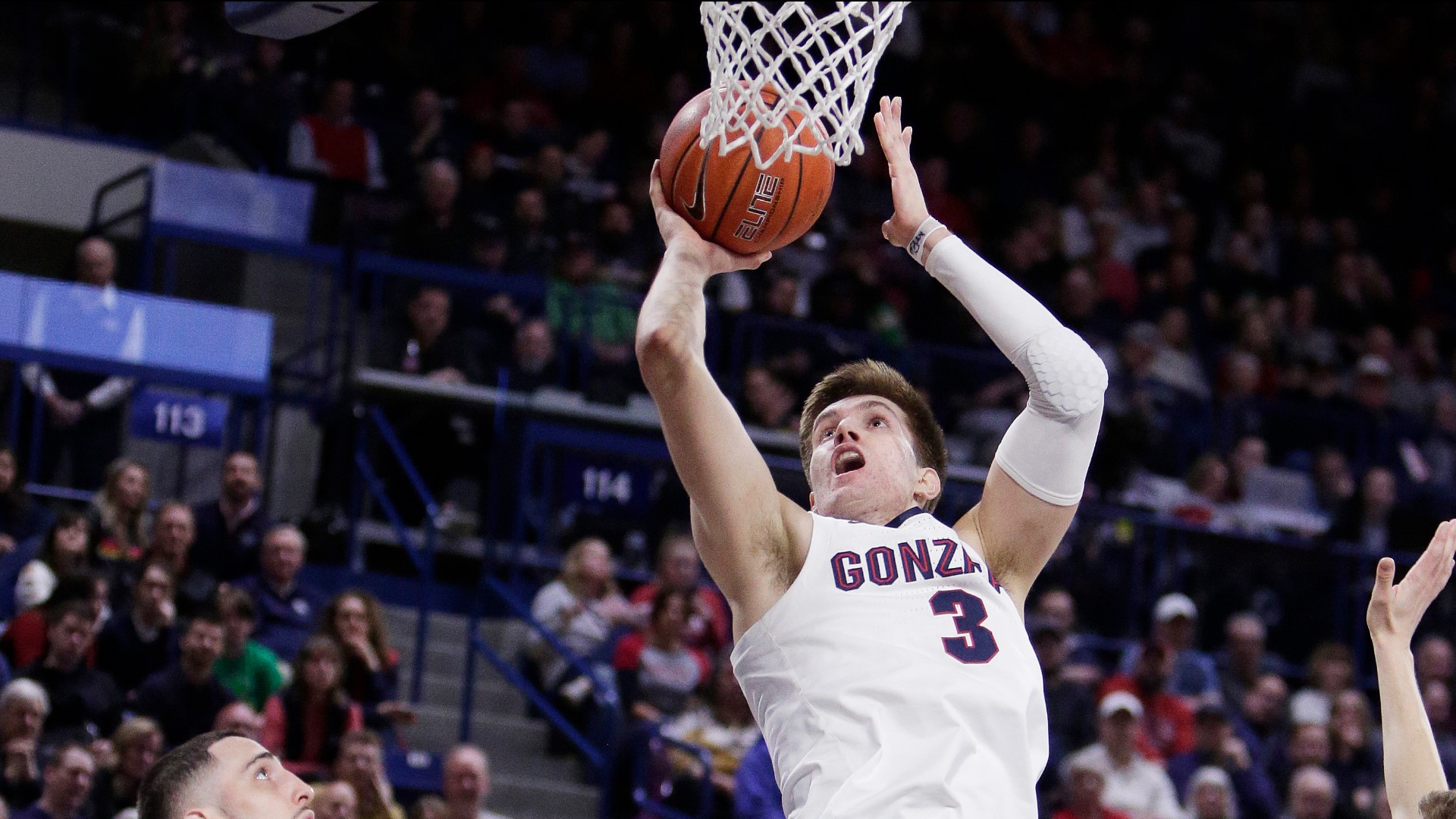 Corey Kispert scored 16 points and Ryan Woolridge had 15 for Gonzaga (28-2, 14-1 WCC), which rebounded from its loss at BYU on Saturday. The win came on a night when former Gonzaga star Adam Morrison was honored.

Gonzaga has won 38 consecutive home games, the longest streak in the country. The Bulldogs are also seeking to play the first two rounds of the NCAA Tournament in Spokane.

Kispert scored 11 points as Gonzaga took an 18-12 lead midway through the first half. San Diego made three straight baskets to tie the score at 18.

Killian Tillie and Petrusev led a 21-9 run by Gonzaga that put the Bulldogs up 39-27.

The Toreros hung around, but Woolridge scored six points during a 10-0 run that put Gonzaga up 76-51 midway through the second.

Gonzaga honored Morrison, a former first-team All-American, before the game by unveiling his jersey number in the rafters of the McCarthey Athletic Center. However, his No. 3 was not retired. Morrison, now a Gonzaga radio broadcaster, electrified college basketball in 2006 when he led the nation in scoring after a season-long battle with Duke’s JJ Redick. Gonzaga finished 29-4 and was No. 5 in the final AP poll.

Morrison was the third overall pick of the NBA draft after his junior year and played several years in the league. He joined former national scoring leader Frank Burgess (44) and NBA Hall of Famer John Stockton (12) as the only Gonzaga players whose jersey numbers hang in the arena.

“When Adam came around, he turned us into a national brand,” coach Mark Few told the crowd.

Morrison thanked a long list of people for his success. “I really appreciate you guys so much and I love you all,” Morrison said. “I’m so thankful I grew up in this community.”

San Diego: The Toreros have lost eight of nine. ... Braun Hartfield was averaging 20.2 points in the previous six games, but was held to three points Thursday ... The Toreros average 66 points per game and have beaten only last-place Portland in WCC play.

Gonzaga: The Zags lead the nation in scoring at 87.6 points per game and in scoring margin at 20 ppg. ... They have six players averaging in double figures. ... Winning the conference title gives them a bye into the semifinals of the upcoming WCC Tournament in Las Vegas. ... They have won at least 25 games for 13 consecutive seasons. ... They have won or shared 19 of the past 20 WCC regular-season titles.

Gonzaga finishes the regular season by hosting archrival Saint Mary’s on Saturday. The Zags beat the Gaels 90-60 on the road earlier in February.

RELATED: Opinion: Who should have their jersey retired next at Gonzaga?