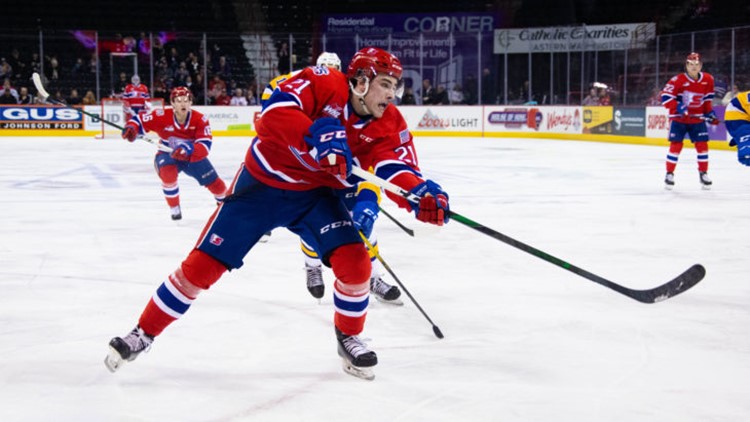 SPOKANE, Wash. — A regular season is a series of tests for any sports team.

How you fare during those short exams go a long way towards determining how your squad will finish the season and enter the playoffs. For the Chiefs, a major test the previous week saw the club go above average as Spokane took 2 of 3 road games through the rugged U.S. Division, with wins at Portland and Tri City before dropping a tough 2-0 loss to the WHL's top rated team in Everett.

Securing 4 out of 6 points with games in 3 different cities in 3 nights against division opponents is a success, and the Chiefs were hoping to build on that as they returned home to host two teams from the league's Eastern Division in Saskatoon and Winnipeg. The Blades and Ice were the second and third place clubs in the East, so Spokane was sure to be tested.

It didn't help the Chiefs had struggled on home ice this season, going just 5-6-1 at the Spokane Arena in the first third of the home schedule. Saskatoon is one of the top teams in the league, and were starting a 7 game road trip with their game against the Chiefs on Wednesday.

Spokane was still without defenseman Ty Smith, who was still smarting from an injury suffered in the Canada-Russia series the previous week, and forward Eric Atchison, who was hurt in the Tri City game during the road trip last weekend. The Chiefs got off to a good start against the Blades though, as defenseman Bobby Russell, who has stepped up with the loss of Smith on the blue line, scored on an end to end rush on Spokane's first power play of the night just over 3 minutes into the game to give the Chiefs a 1-0 lead after one.

The Chiefs put up just 5 shots in the first, despite getting 3 power plays, put goalie Lukas Parik turned away all 8 Saskatoon shots to put Spokane up one after the first 20 minutes. The second period would decide this game, as the Chiefs penalty kill was tested in the middle 20.

Spokane would kill off 4 Saskatoon power plays in the first half of the second, and then would erupt for 3 goals in the final 4.5 minutes of the period to take control of the game. Russell would score his second of the night, and first multi-goal game for Spokane at 15:37 to put the Chiefs up by two.

Bear Hughes converted a nifty Luke Toporowski feed at 17:13 to make it 3-0. Just 1:03 later, Cordel Larson put home a rebound of an Adam Beckman shot to cap a 3 goal explosion and give Spokane a 4-0 advantage heading to the third.

The Chiefs got an empty net goal from Beckman midway through the third to put the game away for the Chiefs at 5-0. The only goal for the Blades on Parik came in the final 6 minutes on a fluky bounce net front that led to Saskatoon's only tally of the night as Spokane secured a 5-1 home victory.

Parik turned away 28 shots as he just missed his first WHL shutout. Despite being out shot 29-23, Spokane's special teams were 1-3 on the power play and an impressive 6-6 on the penalty kill.

Spokane has now won 8 of the last 9 vs. Saskatoon and now turned their attentions to the team right behind Saskatoon in the standings with the Winnipeg Ice finishing up their first U.S. Division swing. Winnipeg still had quite a few guys returning from last year when they were the Kootenay Ice up in Cranbrook, B.C. , including forward Peyton Krebs, a Vegas first round draft pick who had recently been returned to the Ice from the Golden Knights in the NHL.

The Chiefs welcomed back their first round pick as well, as Ty Smith returned after missing the first 4 games back after the Canada-Russia WHL series two weeks ago. The Ice were coming off a 3-2 overtime win over Tri City the night before, running their record to 3-1 on their 5 game U.S. Division swing.

Winnipeg looked like they were on their way to another victory when they jumped out to a 1-0 lead in the first on a power play goal. The Ice out shot the Chiefs 16-10 in the period and could have been up by 2 or 3 goals, but missed some point blank chances that could have padded Winnipeg's lead.

The Chiefs then pulled even on a Cordel Larson rebound of an Adam Beckman shot at 14:33 and it appeared Spokane would head to the third tied. Spokane though would turn the puck over in front of their net in the final 30 seconds and the Ice took advantage as they re-took the lead at 3-2 going into the final period.

Winnipeg had a chance to put the game away with a power play chance midway through the third, but it was the Chiefs that got back in the contest as Beckman scored the team's first short handed goal of the season at 9:14 of the period to make it 3-3. That goal ignited the Chiefs as Eli Zummack put home the game winner just over 2 minutes later after a steal in the Winnipeg zone as Spokane went up 4-3.

The Chiefs put the game away with 1:01 remaining on an empty netter from Larson, his second goal of the night, as Spokane secured their 3rd straight home win 5-3. Despite being out shot 37-32, the Chiefs handed the Ice their second loss of their road trip as goalie Lukas Parik turned aside 34 shot on the way to his 7th win in 9 decisions this season.

The win put the Chiefs into third in the U.S. Division as they passed Tri City, who lost at home to Kelowna. Spokane is now 5 points back of division co-leaders Everett and Portland.

The Chiefs will next head to Everett on Wednesday as they seek their first win in 5 tries against the Silvertips. Spokane will then return home to host a pair of clubs from the B.C. Division as the Chiefs host Vancouver Friday and Victoria Saturday.

We hope to see you at the rink!