Recap of first, second games in opening round series against Portland

Seattle ended up sweeping the home and home series with a win in Portland on Sunday, and suddenly, the Chiefs found themselves getting ready to host Portland for games 1 & 2 on Friday and Saturday. 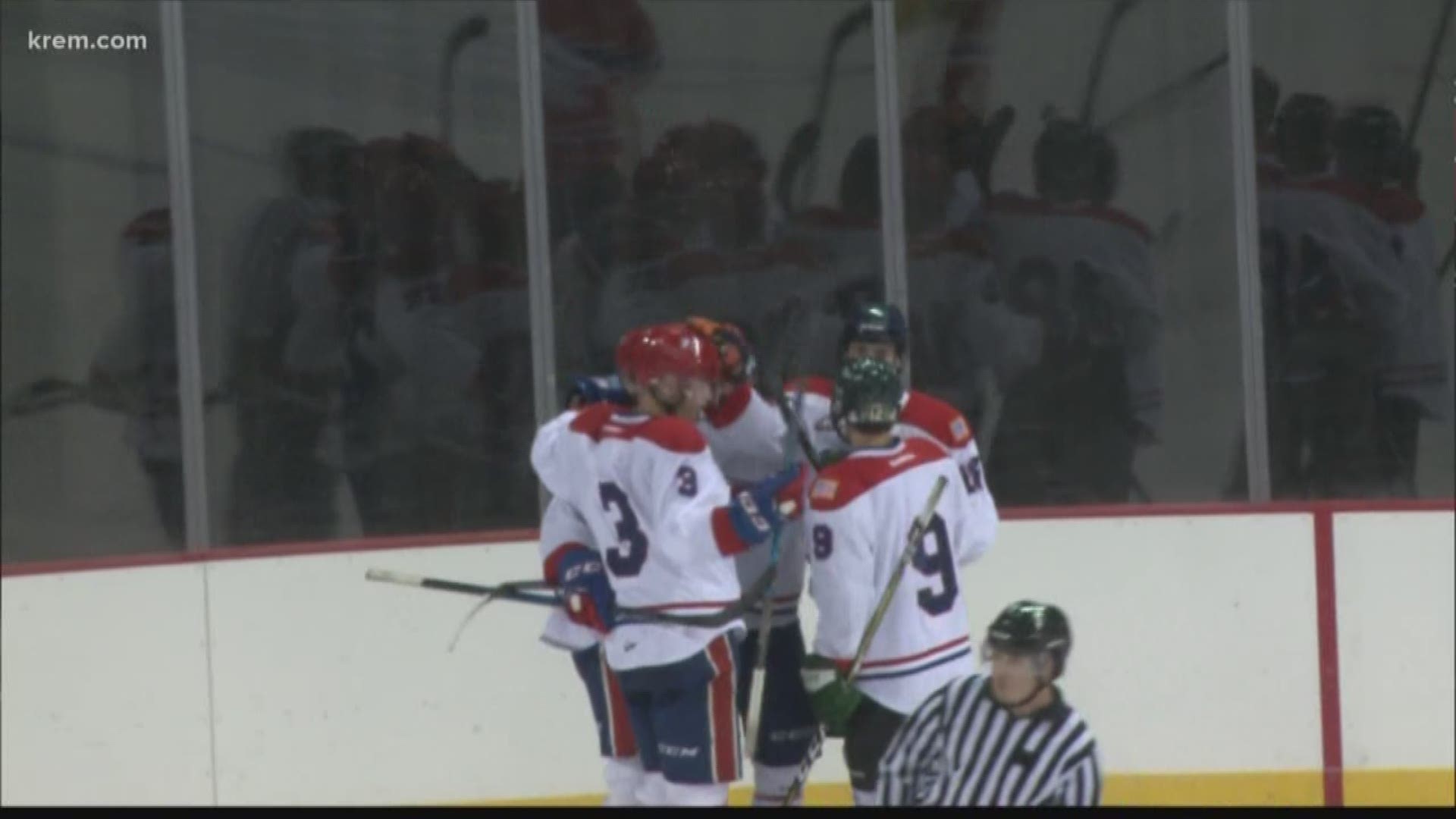 SPOKANE, Wash. — In my post-game show after the final regular season win against Tri City, I wrapped up my interview with assistant coach Scott Burt by saying I'd see him on the bus later in the week for the trip to Portland. He quickly corrected me that the Chiefs win had put the club past Portland into second place and with it, home ice advantage in the first round series. I honestly thought it would be temporary though, as the Winterhawks were playing the next day at home in their final regular season game, and I, along with many others I'm sure, felt the Hawks would win that last game and move back ahead of the Chiefs for that home ice spot. Shows how much I knew. Seattle ended up sweeping the home and home series with a win in Portland on Sunday, and suddenly, the Chiefs found themselves getting ready to host Portland for games 1 & 2 on Friday and Saturday.

Last year, the two clubs met in the first round, and the Winterhawks used their home ice to a series clinching 3-1 victory in game 7 to move on to round two and end the Chiefs season. If this series goes 7, Spokane will have the home crowd behind them in their hopes of winning their first opening round series since the 2013 season. This is the 12th time Spokane has played Portland in the post season in franchise history, with the Winterhawks winning the 8 of the first 11, and the last 3 series in a row. The Chiefs last beat Portland back in the 2002-03 season when Spokane rallied from a 3-1 deficit to win in 7 games in the opening round. In the regular season this year, the two clubs split their 6 game series, with each team winning 2 of 3 on their home ice. Spokane and Portland were the top 2 scoring clubs in the Western Conference during the regular season, so it was going to be interesting how this series played out.

Spokane came in playing their best hockey of the season, having won 8 of their last 10 down the stretch to pass Portland in the standings. The club was fully healthy for the first time all year and was starting to get the chemistry they had hoped for all season. Portland had struggled a bit down the stretch, not only losing their final 2, but 6 of their last 10 as they were without their best player, center Cody Glass. Glass was still out of the lineup for Friday night's game one, while the Chiefs were without their second leading goal scorer, Jake McGrew, who was sidelined with the flu. Spokane took an early loss to their roster again early in game one as defenseman Nolan Reid took a stick to the face early in the first period and left for the remainder of the game. The Chiefs put Portland on the power play 3 times in the first period, and the Winterhawks took advantage on a Jake Gricius tally on their second man advantage midway through the stanza to take a 1-0 lead after one. Right at the end of the period, the game would swing Spokane's way as Portland defenseman John Ludvig took a 5 minute major penalty on a hit to the head to Chiefs forward Ethan McIndoe. Ludvig received a 5 minute major penalty and put Spokane on the power play for 4:43 to start the second period.

The Chiefs took advantage on the extended power play as Adam Beckman scored his first career playoff goal at 3:08 to tie the game at one. Spokane would convert their next power play chance as well, as Riley Woods scored on a wrap around at 12:01 to give the Chiefs the lead for good at 2-1. Jaret Anderson-Dolan made it 3 for 3 for Spokane on the power play with his 12th goal in 10 games late in the period to stake the Chiefs to a 3-1 lead after two. In the third, the Chiefs managed just 2 shots on goal in the period, but scored on both of them as Kaden Hanas scored his first career goal at 3:34 and then McIndoe countered just 49 seconds later to put Spokane in control at 5-1. A Winterhawks power play goal in the final minute off a 2 man advantage capped the scoring as the Chiefs took a 1-0 series lead with a 5-2 victory. Spokane was out shot 36-22 on the night, but went 3-5 on the power play, while also going 6-8 on the penalty kill. Goalie Bailey Brkin was sharp in net with his 34 saves, while the Chiefs won their 4th game over the Winterhawks this season while holding Portland to 2 goals or less.

Now the big challenge was going to be how would the team respond in game 2 without Reid in the lineup? Early on, it appeared Spokane would be fine. Jaret Anderson-Dolan continued his torrid scoring streak as he scored in his 12th straight game with his second straight goal of the playoffs 6:19 into the first period to give Spokane a 1-0 lead after 20 minutes. Luc Smith would extend the lead at 13:19 of the second with his first of the post season, and it looked liked the Chiefs were on their way to a 2-0 series lead. Portland would answer just 2:06 after Smith's goal as Josh Paterson scored for the Winterhawks to cut the margin to 2-1 after two.

The third period saw Spokane miss a golden chance to take a 3-1 lead as Adam Beckman rang the post on a shot net front. Portland then came back and tied the game at 8:11 of the period to knot the score at 2-2. The Hawks then took their first lead since period 1 in game 1 as Paterson scored his second of the night after a Chiefs turnover net front at 9:51 to make it 3-2. Mason Mannek then scored a huge insurance goal for Portland as he slipped one back goalie Bailey Brkin inside the post to give Portland a 4-2 advantage. Spokane cut the deficit to 4-3 as Beckman scored his second of the series at 17:26, but Portland put the game away as an empty netter just 19 seconds later sewed up a 5-3 win and helped Portland even the best of 7 at a game apiece.

Spokane blew a great chance to take a 2-0 series lead to Portland and now find themselves in the position to having to get the split in games 3 and 4 in Portland this Tuesday and Wednesday. Last year the Chiefs fell into a 3-1 hole to Portland and ended up needing to win 3 straight to advance, only to fall short in game 7. Spokane certainly wants to avoid falling into that same scenario this season as they face a Hawks team thrilled to get the split without their best player, Cody Glass. The Chiefs are hoping to get Nolan Reid back in the lineup this week as well, as there's no question the team missed him on the blue line in game 2. Three games of this battle will be played this week, with the two games in Portland and game 5 set for the Spokane Arena on Saturday. All three contests will be at 7:05 pm, and I'll have the call on 103.5 the Game and 1510 KGA starting with the pre-game shows at 6:30 pm. It's a critical week for the Chiefs if they hope to advance, and we will see you at the rink!