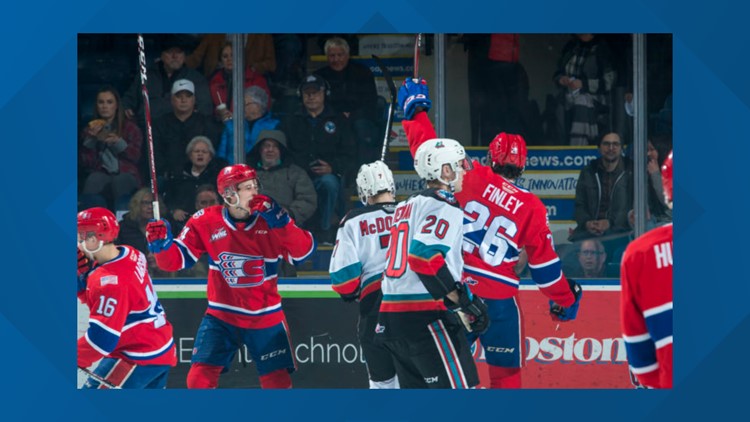 Photo by: Marissa Baecker
KELOWNA, BC - JANUARY 31: Adam Beckman #34 and Jack Finley #26 of the Spokane Chiefs celebrate a first period goal against the Kelowna Rockets at Prospera Place on January 31, 2020 in Kelowna, Canada. (Photo by Marissa Baecker/Shoot the Breeze)

Spokane Chiefs finish the month of January, begin February through the B.C. Division

SPOKANE, Wash. — The Chiefs split the first two games of their 4 game road trip last weekend and were realistically hoping to do the same to finish the road swing as they headed to Canada to play the B.C. Division leading Kamloops Blazers and Kelowna Rockets. After Spokane's loss in Everett on Sunday, the Chiefs were 11 points back of the Silvertips for second place in the U.S. Division. With just 22 games left in the regular season, the realistic chances of catching Everett are pretty slim, so now Spokane has to focus on finishing the back third of the campaign playing their best hockey. The Chiefs knew the upcoming week was going to be a difficult one as they started against a Blazer club that had won 9 of their last 10 games, including a dominant 6-3 win over the Chiefs in Spokane on January 14th.

Spokane had been off two days after their loss in Everett before heading to Kamloops for their Wednesday contest. The Chiefs had started their season back on September 20th with a 4-3 win in Kamloops, but the Blazers had gone 17-3-0-1 at home since that game. Kamloops had the top rated penalty kill and third ranked power play in the league entering the game, and they would show off their power play midway through the first with a goal from Max Martin to take a 1-0 lead. The Blazers would then take back to back penalties, setting up the Chiefs on a 5 on 3 advantage. Spokane would convert as Filip Kral rifled in his 11th of the season at 12:13 of the period to tie the game at one after the first. Kamloops would re-take the lead late in the second on their second power play tally of the night to take a 2-1 lead after two.

The Chiefs would finish killing off the third straight Blazer power play of the game early in the third, but Kamloops would score a minute after that failed man advantage to take a 3-1 lead. Spokane's Luke Toporowski would answer by scoring in his 5th straight game with a goal at 6:31 to draw the Chiefs within 3-2. Spokane would have several chances to tie, but Blazer goalie Dylan Garand made a couple of huge saves net front, including one when the Chiefs had a 6 on 4 advantage in the final two minutes, to secure the lead. Kamloops would score an empty netter with 20 seconds left to wrap up a 4-2 victory. It was the Chiefs second straight loss on the road trip and their second straight to Kamloops in the last 2 weeks. Spokane remained 11 points back of Everett for second in the division as the team headed down the road to Kelowna to finish the road swing on Friday.

Spokane had won their last encounter vs. the Rockets by a 6-1 margin back in early November at the Spokane Arena, but had dropped an overtime decision in the season's second game of the year in late September in Kelowna. Friday's game would see the Chiefs come out firing from the get go. Kelowna native Jack Finley scored on Spokane's first power play just 1:25 into the game on a tip of a Ty Smith shot to give the Chiefs a quick 1-0 lead. Brad Ginnell then scored his third goal as a Chief 1:19 later to put Spokane ahead 2-0. Luke Toporowski then scored a goal in his 4th straight game at 5:17 to make it 3-0 Chiefs. Eli Zummack picked up an assist to extend his points scoring streak to 7 in a row as it looked like Spokane was going to end this game early. The Rockets had other ideas, as they scored back to back power play goals midway through the period to cut the deficit to 3-2. The Chiefs would answer right back though as Adam Beckman scored his league leading 35th goal of the year late in the period to give Spokane a 4-2 lead after one.

Kelowna would cut the lead back to one midway through the second period after a Chiefs turnover in front of their net to make it a 4-3 game. The Rockets would then put Spokane on the power play and the Chiefs converted as Bear Hughes re-directed a Beckman pass at 13:59 to put the Chiefs back up two at 5-3. Hughes then made the play of the game by keeping the puck in the Rockets end in the waning seconds and finding an open Michael King, who scored with just 6 seconds left in the frame to give Spokane a commanding 6-3 lead after two. Spokane would control the third as Finley notched his second goal of the night with another power play tally to wrap up a 7-3 victory. The Chiefs would finish the night 3 for 6 on the power play as they shut down the Rockets man advantage four straight times after they started the game 2 for 2.

The challenge for Spokane would be whether they could duplicate that success the next night as the two teams headed South from Canada to the Spokane Arena for the back half of the home and home series. A win for the Chiefs would allow them to win the season series as well. Spokane went with former Rocket James Porter in net as he hoped to beat his former club. Similar to the game the night before, the Chiefs would jump on Kelowna for a three goal lead in the first. Former Rocket Leif Mattson got things started with his 12th of the year from Eli Zummack and Luke Toporowski 7:12 into the game to make it 1-0 Spokane. The assists from Zummack and Toporowski extended their points scoring streaks to 8 games. Adam Beckman then started a big night for the Chiefs on the power play as he scored his league leading 36th of the year at 13:02 to put the Chiefs up 2-0. Mattson then notched his second of the game with a power play marker at 15:28 to put Spokane in control 3-0 after the first.

Porter would then put his skills on display as he would deny the Rockets on a 2 on 0 break and then stoned another breakaway to keep Kelowna off the board and preserve the 3-0 advantage. The Chiefs would pad their margin as Ty Smith's power play goal at 16:09 put Spokane up 4-0 heading into the third. The club would put the game to rest as Toporowski moved his goal scoring streak to 5 straight with another power play goal just 11 seconds into the third to put the Chiefs in command at 5-0. Rookie Brandon Reller would cap the scoring with the Chiefs season high 5th power play marker of the game to wrap up a convincing 6-0 victory. Porter pitched his first shutout as a Chief as Spokane out shot Kelowna 45-17 in the game. Spokane's special teams dominated, going 5 for 9 on the power play and a perfect 3 for 3 on the penalty kill.

The Chiefs swept the home and home series from the Rockets, taking the season series 3-1 for the second straight year. Spokane is now 9 points back of Everett for second in the U.S. Division as the Chiefs will head out this week for three straight games through the division. First up is division leading Portland in the Rose City on Tuesday, and then the Chiefs return home to host rival Tri City and Everett on Saturday and Sunday. It's another challenging week for Spokane, but it will definitely give the team a preview of what the playoffs will be like in just over a month. I'll have the call on Tuesday and Sunday on 103.5 FM the Game and 1510 AM KGA, while Saturday's game will be on 94.1 FM the Bear and 790 KJRB due to Gonzaga basketball. Tuesday and Saturday's games will see the pre-game at 6:30 pm and the puck drops at 7:05 pm. Sunday's game with Everett will be a 4:30 pm pre-game and 5:05 pm puck drop. We hope to see you at the rink!