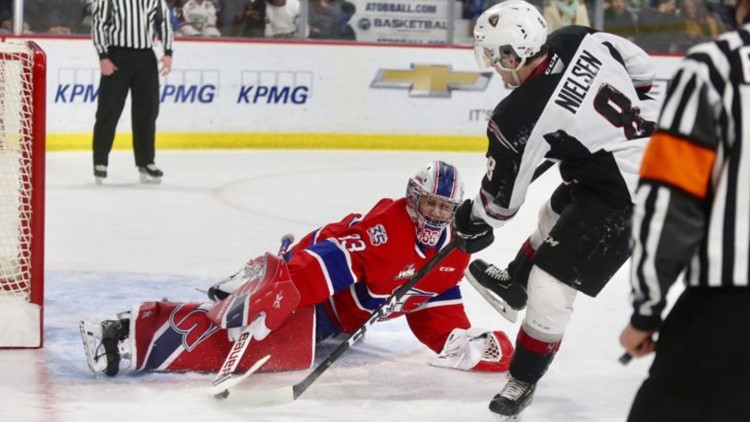 Chiefs Blog: Spokane starts slow with a loss at Portland before sweeping Vancouver

SPOKANE, Wash. — The New Year of 2020 didn't exactly start well for the Chiefs as they dropped two straight heading into and in the New Year with a New Year's Eve loss at Tri City and a January 3rd home loss to division leading Portland. In fact, Spokane had come back from the holiday break yielding goals at a rapid rate, having given up 23 in just 4 games while going 1-2-1 in those contests. The loss to Portland had dropped Spokane 13 points back of the Winterhawks in the U.S. Division and put the Chiefs in the precarious position of being out of the division race with almost 30 games left in the season. The news wasn't any better off the ice, as the club officially lost back up goalie Campbell Arnold and defenseman Matt Leduc to season ending surgeries on their knee and shoulder, respectively. The Chiefs did pick up goalie James Porter, Jr., a Bonners Ferry, ID native, who had played for Kelowna and Moose Jaw. Porter in fact, made his debut against Portland on the 3rd, giving up 2 goals in 2 periods of action in Spokane's 6-4 loss.

The Chiefs had fallen down 4-1 after scoring an early Cordel Larson goal in Spokane's first meeting with Portland. Tuesday's game at the Moda Center went about the same script. Larson fired home his 11th of the year at 11:04 of the first period to put the Chiefs ahead 1-0. Portland came right back just 43 seconds later as goalie Lukas Parik, in his first start coming back from the World Junior Tournament, got out of position and got beat on the near post. The Winterhawks scored a power play goal late in the first after Parik whiffed on the puck with his stick in the crease and Portland took a 2-1 lead into the second.

Portland added to the margin on a Jayden Dureau rebound almost 8 minutes into the second to make it 3-1 Hawks. Seth Jarvis then scored between 2 Chiefs defenders late in the period to give Portland a 4-1 advantage. The Chiefs cut the lead in half when Eli Zummack extended his league best scoring streak to 15 straight games to get Spokane within 4-2 after two. Jack Finley then scored in his second straight game as his goal at 13:25 of the third period cut the lead to 4-3. Spokane had some great looks in the final minutes and pulled Parik from net in the final 2.5 minutes. The Chiefs would fail to get the equalizer though, and Dureau sealed the win with second goal of the night on an empty netter with 54 seconds left to cap off Portland's second straight win over the Chiefs at 5-3.

The loss dropped Spokane 15 points back of Portland in the division race and pretty much sealed the Chiefs fate as far as competing for the U.S. Division championship. The team needs another forward up front to patch up a leaky third line, and the team went out and got forward Brad Ginnell from Winnipeg on Wednesday. He's a big body, who has really good hands net front, and will be great with a Michael King. The club I'm sure was eyeing another defenseman to take the load off of Noah King, Filip Kral and the returning Ty Smith as well. That trade didn't come to be as Smith was back in the lineup when the Chiefs returned home Friday to open a home and home series with Vancouver in a re-match of last year's Western Conference Finals playoff series. Both the Giants and Chiefs have had disappointing seasons thus far, and the two were hoping to turn that around starting with Friday's meeting at the Spokane Arena.

A major snowstorm hit the Spokane area on Friday as the two teams struggled to find the net early. Neither team scored in the first as the Chiefs out shot the Giants 8-7 in the opening 20 minutes. Spokane would break the scoreless deadlock when Michael King tipped home a Ty Smith shot 5:54 into the period to make it 1-0 Chiefs Vancouver would score just 2.5 minutes later on a nice play net front and the two teams headed to the third even at one. Neither club took a penalty in the first 40 minutes and as it turned out, neither would take a penalty all game, a first that I have witnessed in my 18 years doing Chiefs broadcasts. After outshooting the Chiefs 17-9 in the second, the Giants would out chance Spokane 18-10 in the third but Chiefs goalie Lukas Parik turned away every Vancouver shot to keep the Giants at bay. Eli Zummack would score at 7:38 with what turned out to be the game winner for Spokane. It was the 16th straight game Zummack has scored in, the longest streak in the WHL this season. Spokane would put the game away when Jack Finley scored a goal in his 3rd straight contest at 13:40 to wrap up a 3-1 victory.

Adam Beckman extended his points scoring streak to 12 in a row with an assist on Finley's goal, and Ty Smith picked up 2 assists in his first game back from World Juniors. The star of the show was Parik, as he turned away a career high 41 shots for the Giants, who out shot Spokane 42-27 in the game. The win also snapped Spokane's 3 game losing streak and extended Vancouver's losing skid to 4 straight. The real test came the next night as the two teams boarded the bus right after Friday's game in Spokane and braved the snowy, icy road of I-90 and headed Northwest to Vancouver's home rink in Langley, B.C. the next night. The team traveled most of the night and arrived in Langley at the hotel a bit before 6:30 am. Smith stayed behind in Spokane, while goalie Mason Beaupit returned to his team in British Columbia, leaving the Chiefs with 20 players for the game.

Spokane went back to Parik in net and the club got off to a great start as Filip Kral scored off a rebound of a Zummack shot just 1:38 into the game to give the Chiefs a 1-0 lead. The assist extended Zummack's league best scoring streak to 17 straight games and began a huge night offensively for the forward. Zummack would extend the lead to 2-0 at 4:15 on a great feed from Luke Toporowski.

Just when it looked like the Chiefs would have a big night, the Giants came roaring back. Vancouver entered Saturday's game with the worst power play in the WHL at just 11.7%, but you wouldn't know on this night. The Giants scored on back to back man advantage chances just over 3.5 minutes apart to even the game at 2-2. Vancouver then scored a goal off the rush in the final minute of the first, and Spokane fell behind 3-2 after 20 minutes. In the second, the Chiefs started to take over the game offensively as they out shot Vancouver 10-8 and were rewarded when Adam Beckman scored his league leading 30th goal of the year at 15:04 to tie the game at 3 after two periods. The goal extended Beckman's points scoring streak to 13, the third longest current streak in the league.

Spokane would come out in the third and see Parik make some huge saves to keep the Chiefs in the game. Parik turned away a penalty shot and a couple point blank chances net front to keep the Giants off the scoreboard. The Chiefs broke the tie midway through the third as Zummack potted his second goal of the night at 9:35 to give Spokane a lead they'd never lose at 4-3. The Chiefs then held firm defensively and would put the game away on a pair of empty net goals from Cordel Larson and Leif Mattson in the final 1:10 to give Spokane the sweep of the weekend series with a 6-3 victory. Parik got his second straight win of the weekend with 29 saves, while Zummack finished with a 4 point night with 2 goals and 2 assists. Beckman, Filip Kral and Larson all finished with a goal and an assist, while Graham Sward and Toporowski had 2 assist games.

The weekend was just what the team needed as they snapped their 3 game losing streak and launched a new winning streak. The club will need the momentum too, as they face a tough schedule the rest of January. This next week will see the Chiefs start a 4 game home stand, starting with the two division leaders in the West with B.C. front runner Kamloops coming to the Arena at Tuesday, followed with U.S. leader Portland on Friday. Regina from the East Division will finish the week on Saturday, so the challenge will be great for Spokane to keep pace with Portland and Everett at the top of the division. I'll have the call on 103.5 the Game and 1510 KGA on Tuesday and Friday with the pre-game shows at 6:30 pm and the puck drops at 7:05 pm. Saturday's game with Regina will be on 94.1 the Bear and 790 KJRB at the same times due to Gonzaga basketball. Let's hope the Chiefs keep up the same play they showed against Vancouver next week and we hope to see you at the rink!