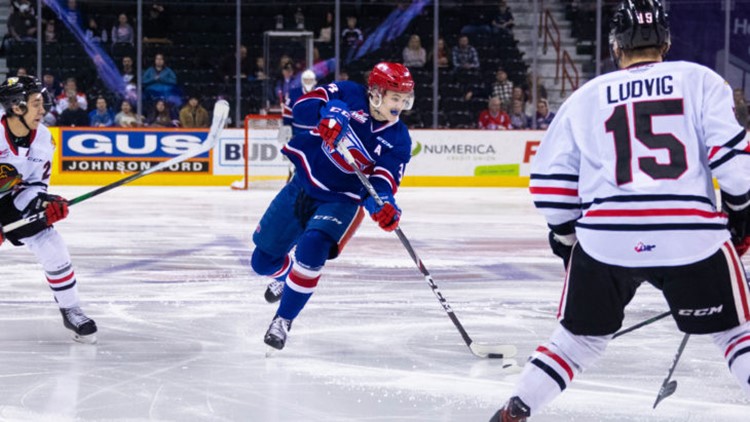 SPOKANE, Wash. — With 2019 coming to a close, the Chiefs were finding the infirmary ward far more often than they wanted to heading into the New Year of 2020. Spokane lost back up goalie Campbell Arnold to a knee injury last week in Seattle that will put him on the shelf for the season.

Even starting goalie Lukas Parik couldn't escape the injury bug in the World Junior tournament as he was helped off the ice on the final day of 2019 in the Czech Republic's loss to Canada. While Parik isn't expected to be out long term, Spokane has lost defenseman Matt Leduc for the year to shoulder surgery and will now be without one of their top 4 defensemen.

The Chiefs had seen third string goalie Mason Beaupit come away with a 5-3 win over Tri City in his debut last Saturday at the Spokane Arena, and were hoping for another steady performance in net as Spokane headed South on Highway 395 to the Tri Cities in a re-match with the Americans in the 30th Annual New Year's Eve game on Tuesday.

The Chiefs had won 4 straight from the Americans during their season series this year, but had dropped 3 in a row in the annual trip to Kennewick to end the calendar year. In fact, Spokane had lost 18 of the previous 29 New Year's Eve meetings, so Tuesday's tilt was going to be a tough one as usual.

Tri City took advantage of a Chiefs turnover in their own zone midway through the first period to score an easy goal on Beaupit to make it 1-0 Americans. Spokane answered back on a 4 on 4 less than 4 minutes later when Leif Mattson extended his points scoring streak to 7 straight with a perfect assist to Luke Toporowski for his 10th of the year to make it a 1-1 game. It was the third straight game with a goal for Toporowski as the Chiefs appeared poised to take the lead late in the first period.

Spokane got back to back power plays late in the first, but things backfired big time on the Chiefs. The club had given up just 2 short handed goals in 35 games this season going into the Tri Cities. On this night, Spokane would surrender back to back shorties in just 1:10 as the Americans took a 3-1 lead into the second.

The Chiefs would re-group in the middle 20 as they out shot the Ams 11-4 in the period and would cut the lead to 3-2 when Adam Beckman scored a goal in his 9th straight game. The streak is the longest this season in the WHL as the league's leading goal scorer has put up 15 goals in those 9 games. In perspective, Beckman led the Chiefs with 32 goals all of last season. He already has 28 through 36 games this year. Minnesota has to be excited to have drafted him with the level of improvement he continues to show.

In the third, Tri City jumped back to a 2 goal lead as Sasha Mutala scored 4:05 in to make it 4-2 Americans. The Chiefs Bear Hughes, who's had a great rookie campaign, scored from the blue line just 40 seconds later to cut the margin to 4-3 Eli Zummack got an assist to extend his team best 13 game point scoring streak into the New Year. Spokane would pull back even at 12:05 when Toporowski notched his second goal of the night to even the game at four apiece. Toporowski has put up 4 goals in his 3 game goal scoring streak. The two clubs headed to overtime for the first time in 6 meetings, but it the Americans who snapped their 8 game losing skid as Marc Lajoie scored 1:16 into OT to give Tri City a 5-4 victory.

It was a bitter loss to swallow, but the team had to feel good about getting a point on the road after being down 2 goals in the third. Now the Chiefs brought in the New Year of 2020 as they headed home to take on the division leading Portland Winterhawks.

It was the first meeting with the Hawks since November 15th, when Jack Finley's overtime goal had given Spokane a 4-3 win as the Chiefs rallied from a third period deficit in that one. In the only other meeting, Spokane had been drubbed 6-3 on home ice back on October 25th.

The Chiefs were really going to have to buckle down though as the club was still playing the 16 year old Beaupit in net. Spokane did make a move before the game though, as they acquired Bonners Ferry, ID native and former Kelowna Rocket James Porter, Jr. from Moose Jaw for a draft pick. Portland was without their top goaltender Joel Hofer as he was backstopping Team Canada in the World Junior Tournament.

Isiah DiLaura got the start for Portland and would turn the puck over behind his net just 3:32 into the game and the Chiefs Cordel Larson took advantage, scoring a wrap around goal to give Spokane a 1-0 lead. The Winterhawks took over the rest of the period, racking up 3 goals on Beaupit and the Chiefs over the final 13 minutes of the period to take a 3-1 lead.

Beaupit kept the Chiefs in the game with a couple of spectacular saves, but would be replaced at the start of the second period by the newly acquired Porter. Spokane would turn the puck over in their zone in the first minute and a half of the second and Reece Newkirk would rifle home his second straight goal of the game 1:32 into the period past Porter to give Portland a commanding 4-1 lead. That lead would hold through the stanza as Spokane failed to generate a power play chance through 40 minutes.

In the third, the Chiefs would cut the margin to 4-2 midway through the period when Jack Finley scored his 9th of the season on a shot from the right wing. Spokane then drew within 4-3 when Luke Toporowski scored a goal in his 4th straight game on an Eli Zummack assist.

The point for Zummack came in his 14th straight contest, matching the longest streak in the league this season. As the crowd was in full roar in the Chiefs comeback, a careless turnover by Michael King in his own zone ended up in the back of the Spokane net just 32 seconds later to put Portland back up two at 5-3.

The wind appeared to go out of the sail of the Chiefs, but a power play chance afforded Spokane new life just 29 seconds later. Adam Beckman would convert, as he scored a goal in his 10th straight game, the longest in the league this year and a new Chiefs franchise record, at 14:26 to bring Spokane within 5-4.

It was as close as the Chiefs would get though as Portland would score an empty net goal in the final minute to get their second straight win in Spokane 6-4. The loss dropped the Chiefs 11 points back of Portland in the U.S. Division and 8 back of Everett for second place.

Spokane won't have a lot of time to mope about the loss though, as they will face the Winterhawks again on Tuesday night at 7:05 pm in Portland. The Chiefs will then have another home and home next weekend as they take on Vancouver in a re-match of the last year's Western Conference Finals.

Spokane will host the Giants Friday night before heading to Vancouver on Saturday. I'll have the call on 103.5 FM the Game and 1510 AM KGA for all three games with the pre-game shows at 6:30 pm and the puck drops at 7:05 pm. Spokane will welcome back goalie Lukas Parik at some point during the week, and Ty Smith should follow after Canada's gold medal game with Russia.

Let's hope the Chiefs can avenge their last loss to Portland and make up some ground on the division leading Winterhawks.

We'll see you at the rink!