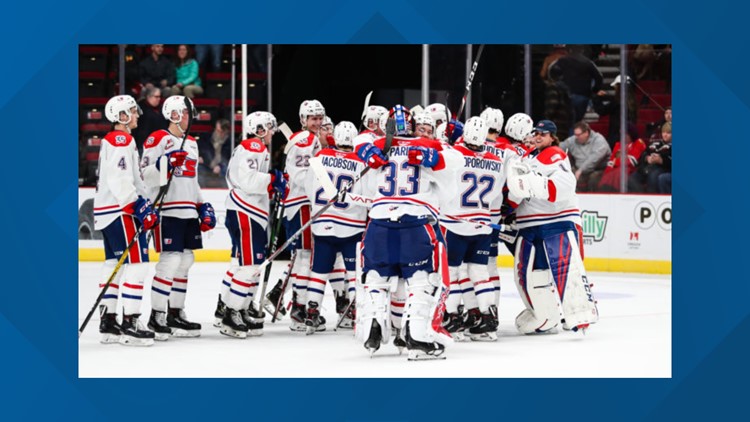 A look back at Spokane's 3 games in 3 nights on the road through the U.S. Division

SPOKANE, Wash. — The good news this past week for the Chiefs is they finished off their season long 7 game home stand last week with an impressive 6-1 victory over Kelowna.

The not so good news is the team went just 3-3-1 in those 7 contests, picking up 7 of the possible 14 points over the 3 week period. Losing chances at home means you have to pick up those lost points on the road, which is never easy to do in the Western Hockey League. Spokane now faced the daunting task of playing 3 games in 3 nights, in 3 different cities against U.S. Division opponents over the past weekend. All three teams were ahead of the 4th place Chiefs in the standings, so it was an excellent opportunity to make up some ground...or fall further behind, as Spokane headed to second place Portland, third place Tri City and first place Everett.

First up were the second place Winterhawks, who were tied with Tri City with 23 points, but had a game in hand on the Americans to technically hold second in the division. The Chiefs and Hawks had met in late October at the start of the Chiefs 7 game home stand, and Spokane had seen Portland out skate, out compete and out physical the Chiefs on their way to a 6-3 victory. Portland's second line of Cross Hanas, Jake Gricius and Robbie Fromm-Delorme had dominated Spokane that night, putting up 11 points. led by Gricius career high 2 goals and 3 assists. Spokane would be without captain and defenseman Ty Smith, as well as leading scorer Adam Beckman, as the two were traveling back from the WHL-Russia series played the night before in Prince Albert. Portland was without Fromm-Delorme, who was out with an injury. The Hawks did have starting goalie Joel Hofer, who played in net for the WHL the night before.

Friday's game was from the Moda Center, the old Rose Garden, as the Chiefs played in the newer building for the first time in 2 years. I'm always a fan of the Garden as the lighting is much better than the old Memorial Coliseum, and the seating is much easier on my 6'3" frame. It didn't take long for the Chiefs to make themselves comfortable in the newer building either as Eric Atchison scored on a rebound of a Connor Gabruch shot only 1:27 into the game to take a 1-0 lead. Portland tied the game at one midway through the period, but Spokane re-took the lead on an Eli Zummack tip of a Jordan Chudley shot at 17:03 to take a 2-1 lead after one. The second period would see Portland dominate, out shooting Spokane 19-8 and scoring two goals to go ahead 3-2 after 40 minutes.

Spokane had been 0-6 when trailing after two periods this season, and it looked like 0-7 was on the way through much of the third. Spokane pulled goalie Lukas Parik in the final two minutes still down by one, when the move paid off. Jack Finley scored on his own rebound net front with just 1:17 remaining to even the game at 3 and send the contest to overtime. In the OT, neither club threatened in the first 4 minutes, but in the final minute, Zummack found an open Finley in the left circle, and the second year center rifled a one timer through Hofer with 55 seconds left to give Spokane a come from behind 4-3 overtime victory. Parik was stellar, stopping 36 of 39 Portland shots as the Chiefs started the road trip on a winning note. Spokane was now 4-1-1 on the road as they headed to third place Tri City on Saturday.

The Americans were coming off a 3 game sweep on the road in the Central Division as they scored wins over Calgary, Lethbridge and Edmonton. It was an impressive road swing for Tri City and they were well rested after not playing since Monday. The Chiefs were still without Ty Smith, as he was still recovering from the WHL-Russia series, but Adam Beckman returned to the lineup in the two teams third meeting of the season. The road team had won the previous two matchups, so Spokane was hoping that trend would continue on Saturday. It didn't take long for Beckman to make his presence known as he took a Cordel Larson pass and scored in the final 3 minutes of the first period to give the Chiefs a 1-0 lead after one.

Larson would add to the lead with his 3rd goal of the year midway through the second period to put Spokane up 2-0. Tri City then took advantage of a Spokane turnover to score at 16:11 of the period to narrow the gap to 2-1. The Chiefs responded 38 seconds later when Bear Hughes scored his 8th of the season, 3rd amongst WHL rookies, as Spokane went back up by 2 at 3-1. A Tri City power play goal in the final 10 seconds of the second but the margin to 3-2 though as the Americans carried the momentum into the third period.

Chiefs goalie Lukas Parik made some huge saves early in the third to keep Spokane on top, but an ill advised pass in front of the Chiefs net saw Tri City take advantage and score at 12:04 of the third to tie the game at three apiece. Spokane turned up the offense late though, and the pressure in the Americans zone paid off as Filip Kral found Adam Beckman open net front, and Beckman scored his 2nd goal of the night with 49.9 seconds left to secure a 4-3 victory. It marked Spokane's season high 3rd straight win, and brought the Chiefs within 1 point of Tri City for third in the U.S. Division. Spokane was now 10-0 when scoring 4 or more goals, and 5-1-1 on the road. The Chiefs would look to make up even more ground on the division as they headed to first place Everett the next afternoon.

The Silvertips were coming off a stunning overtime loss at home to Winnipeg the night before, after coughing up a 2 goal third period lead. Spokane had dropped 3 straight to Everett by 4-3 scores at home at the Spokane Arena, and were hoping to return the favor in the Tips barn. The Chiefs went with Campbell Arnold in net on Sunday, and a good thing too, as he turned aside all 13 shots from Everett in the first period as the teams were scoreless after one. Spokane was flat offensively in the first period, putting up just 5 shots, and that trend continued in the second as the Chiefs out got 5 chances on Everett goalie Dustin Wolf in the second. Everett got one power play chance in the second and scored just 10 seconds into it to take a 1-0 lead after 40 minutes.

The Chiefs woke up offensively in the third, out shooting the Silvertips 12-2 in the final period. Spokane had back to back power play chances in the third, including one with just 2:04 remaining. The team pulled Arnold from net and had a 6 on 4 advantage, but a couple of turnovers led to Everett scoring a short handed empty net goal with 36 seconds left to wrap up a 2-0 victory. It was just the second time Spokane was shut out this year, and was the 4th straight loss to the Tips this season. Spokane is now 7 points back of Everett for first in the division, and 5 behind second place Portland, who also won on Sunday. The Chiefs fared well on the 3 games in 3 night road swing, picking up a possible 4 of 6 points, and the team will get defenseman Ty Smith back in the lineup Wednesday when they return home to take on Saskatoon.

Spokane is an impressive 5-2-1 on the road, but a below average 5-6-1 at home. The Chiefs will have to get a lotttt better on home ice if they hope to make their way up the division standings. The club will get a chance to do just that this week as they host two teams from the Eastern Division at the Spokane Arena this weekend. Saskatoon visits the Chiefs on Wednesday, while the new Winnipeg Ice makes their first appearance on Saturday in Spokane.

I'll have the call on 103.5 FM the Game and 1510 KGA for Wednesday's game with Saskatoon, while Saturday's contest with Winnipeg will be on 94.1 the Bear and 790 AM KJRB starting with the pre-game shows at 6:30 pm and the puck drops at 7:05 pm. Let's hope the boys carry the success home with them and we hope to see you at the rink!