'This is an amazing place': Rolovich speaks to media for first time as WSU head coach

Nick Rolovich was officially introduced to media on Thursday, and spoke about his move to Pullman and his expectations for the team going forward. 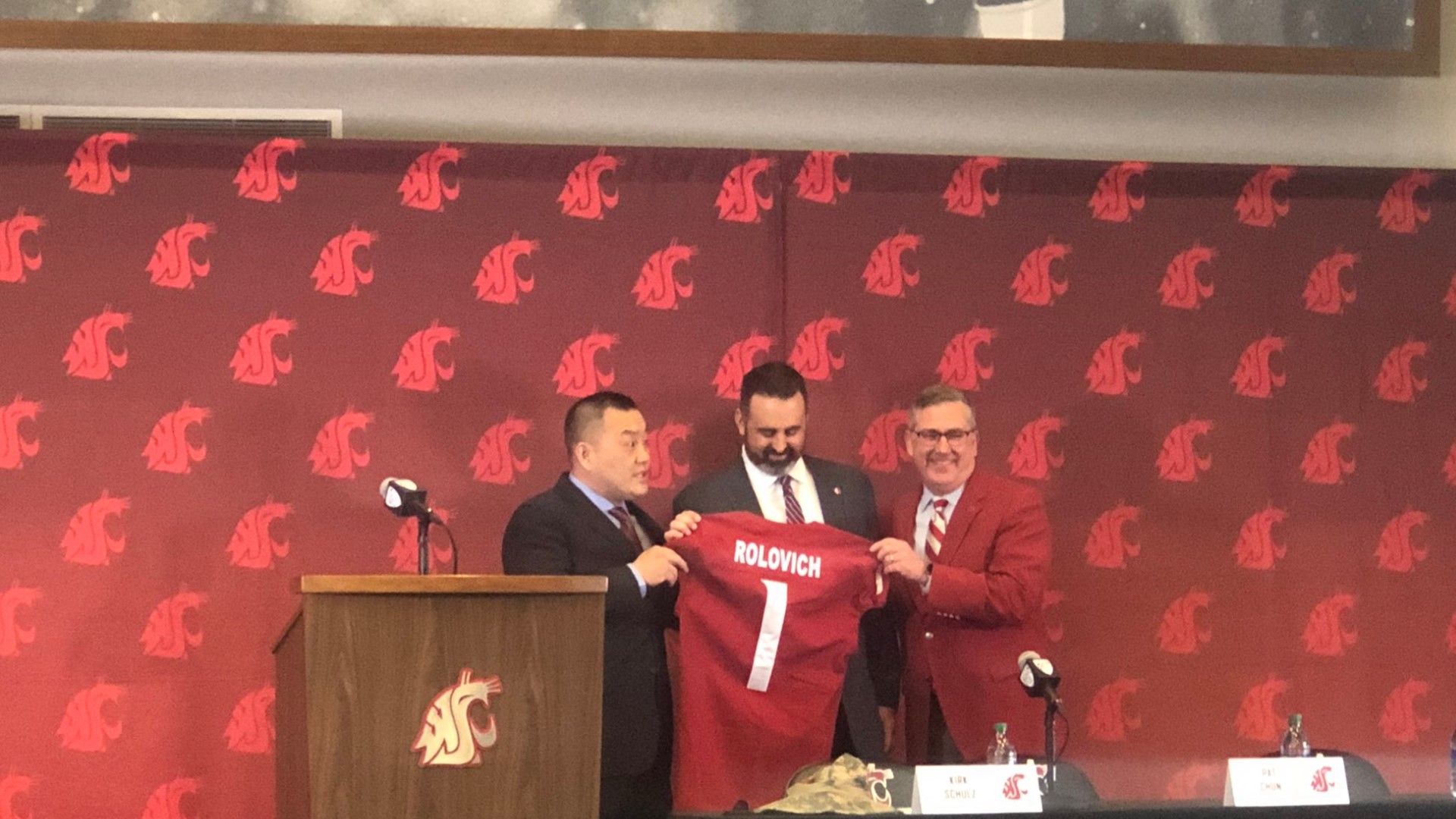 PULLMAN, Wash. — Nick Rolovich spoke to the media for the first time as WSU's head football coach on Thursday, and covered everything from his plans for the team to his move from Hawaii to the snow-covered Palouse.

"I was in Orlando, Florida on vacation, sitting by the pool enjoying a beverage. And my wife had her phone on her, and she came over to me and said Pat Chun called and said you need to call him immediately," Schulz said.

Schulz added that it's never good when the AD needs to speak with you immediately, but that Chun told him he would have a plan in an hour, which he did.

Schulz said Rolovich was at the top of his and Chun's list the entire time, and that there was a lot of people who were interested in the position. He also said the school wanted a coach who's offensive scheme was close to Leach's air raid.

Chun then took to the microphone, congratulating former Coug Steve Gleason for receiving the Congressional Gold Medal on Wednesday, as well as women's soccer players Morgan Weaver and Averie Collins for being selected in the National Women's Soccer League draft.

He would go on to emphasize that this doesn't mean WSU is in a rebuilding process, something also said by Rolovich.

Chun welcomed Rolovich and said he would soon know what it's like to be a Cougar.

"You'll soon know what it means when we say 'Once a Coug, Always a Coug.'," Chun said.

Chun would go on to tout how passionate WSU fans are, including the streak of Ol' Crimson appearing on ESPN's College Gameday. He also said Rolovich was the perfect fit.

"Finding the exact fit to be our next head coach is imperative at Washington State," Chun said.

Rolovich then began addressing the crowd, which included media, athletic staff and the current football team.

"Imagine what William Goodyear would think of his home if he could see it now. This is an amazing place," Rolovich said.

Rolovich thanked Schulz, Chun, the search committee and previous coaches he'd worked with along the way.

He also said thank you to the University of Hawaii, where he had served since 2008 in different coaching positions, including the last four seasons as head coach.

"I would be wrong if I didn't say 'Mahalo' to Hawaii for giving me this opportunity and every other opportunity I've had," Rolovich said.

He said he wanted to coach at a place with a rich history of coaches and players like WSU. He added that anyone who played for the team in the past, whether they made it to the NFL or was a part of the scout team, are welcome back to visit.

Rolovich cited three things in his decision to be the Cougars' next head coach: the athletic department's leadership; the weather; and the culture of winning.

As for the weather, he said it was "the number one question" he's gotten about the move. But he said its the winning climate, not the weather, that drew him to Pullman.

"What attracted me is not the weather, it's the climate. The Cougar climate. The passion I've seen since I've step foot in the city, this campus," Rolovich said, going on to reference the Pullman community.

Pullman also got some love from Rolovich, with him saying he looked forward to raising his family there.

"One thing sold me on this place; family. A place where could look forward to the next chapter of raising my family," Rolovich said. "In a community that respects one another, loves one another, sees one common goal. That excited me. That's why I'm honored to be here today."

Rolovich reiterated a point that Chun brought up: his hire wasn't part of a rebuilding process. He instead said it was just moving forward.

"This is not a rebuild. This is an addition," Rolovich said. "All the permits are in place, up here, everything that has been done to raise the facilities, its all in place," he said.

He also joked that he was going to ask the creator of the Run and Shoot offense, which he runs, to "Run and Coug."

The floor was then opened up to questions from the media. Rolovich said he didn't remember when or where he heard of the WSU opening. He also said he liked Rolo chocolates when asked.

A lot of the questions revolved around recruiting and keeping players that committed to WSU when Leach was coach.

Rolovich said its more about getting the right players instead of a lot of players.

"It's not about quickness, it's about making sure we get the right ones to be here," Rolovich said. "That's what I think is most important."

KREM Sports Director Brenna Greene asked the new coach about the fact many recruits have since expressed approval at Rolovich's hiring.

He responded by saying how hard it is for high school players through the recruitment process, especially when a coaching change is made.

"Imagine how hard it is as a 17-year-old young man, whoever you mentor is or assistance in the recruiting process," Rolovich said. "Its hard for these guys [current players]. These guys can vote. We got young kids that just made a life-changing decision, and the bottom, somewhat, not fell out but it seems like a scary thing. It's like I told these guys, I'm sorry you had to go through this, I get it. But here's what I'm about, here's what we got moving forward."

Rolovich said he also wanted to keep recruits and their families informed going forward to help earn their trust.

But the answer that possibly got the biggest positive reception was when a reporter asked him, "Two word: Apple. Cup."

Rolovich answered by listing the number of days until the rivalry game.

"Three numbers: Three, one seven. That's the number of days until we get to play it," Rolovich said.

The press conference wrapped up with questions about his offensive, with Rolovich saying they will likely run the ball more than previous years.

He also said he wants the team to be close-knit.