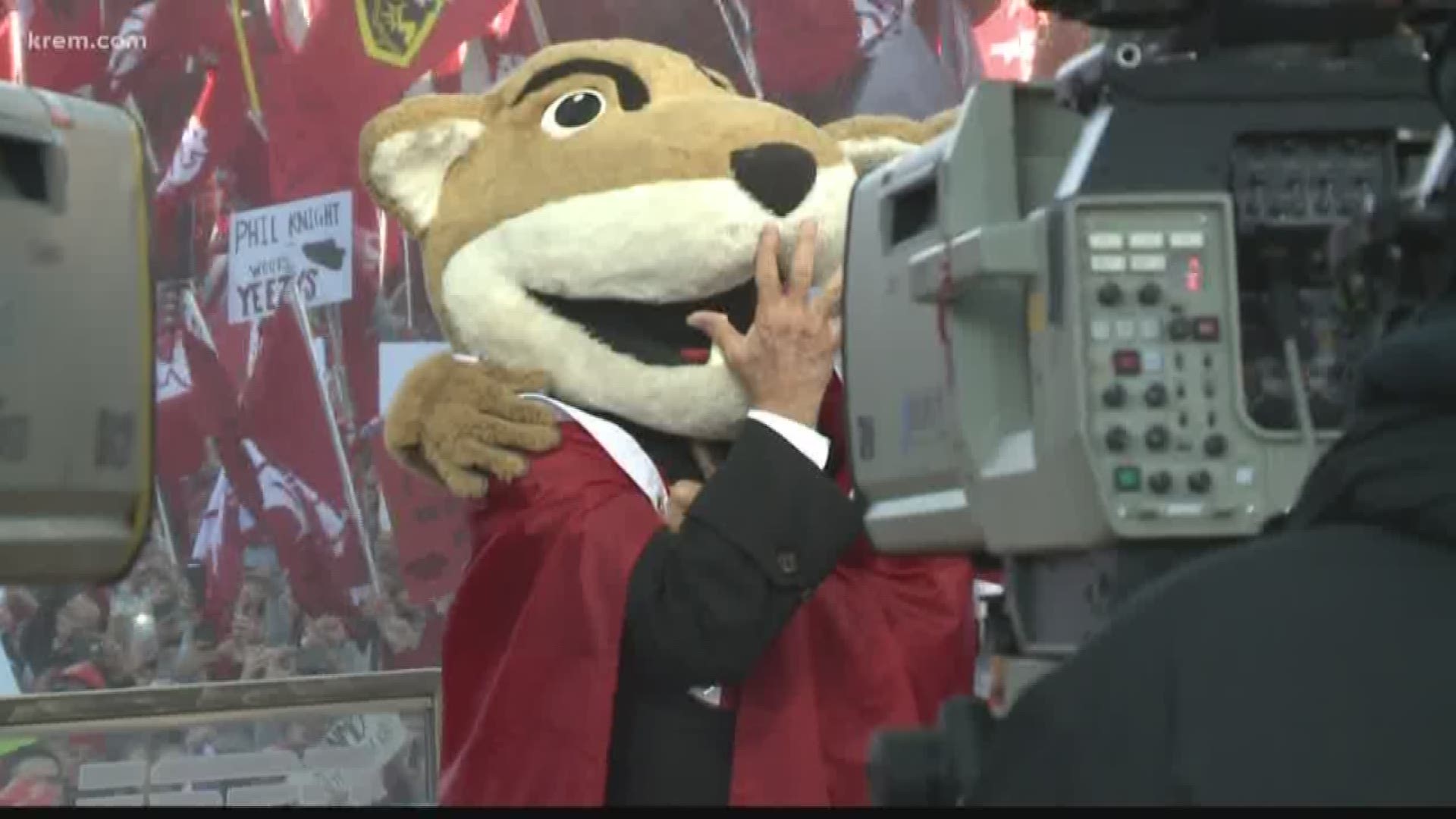 KREM Sports Director Brenna Greene sat down with WSU AD Pat Chun last week to discuss a variety of topics that have come up in his first full year on the job.

Q: When did you realize Gardner Minshew was going to become such a big deal in Pullman?

A: Probably when I started to see the older generation put on mustaches in the stands. Rarely will you have a student-athlete-- I mean, I've been around some student-athletes that can raise the performance of his or her team-- but never have I seen anyone raise the level of everyone in and around Washington State to a point where the nation heard. His leadership skills are really something I've never seen out of any student-athlete. He came at the perfect time. I told his dad he needed Washington State as much as Washington State needed him. It was just an alignment of him and Mike Leach and this locker room and what Washington State needed and history was made. To me, it was pretty amazing to watch. He had life experiences at other schools. He'd been running the Air Raid, but he also been working on himself and figuring out how he could be the best he could be if he was given one more chance to play and lo and behold life brought him here to Pullman, Washington. It was beauty to behold to see how the whole nation just reacted to Gardner and that crazy mustache.

Q: What was the College GameDay experience like for you?

A: I had been a part of College GameDay experiences at a previous institution. It was nothing like I've ever seen in my entire life and I give those GameDay guys credit. When they came to Pullman you had a handful of them actually go spend time with our Murrow College and do kind of a one hour symposium for them just last minute. Reese Davis went to The Coug and went around town just to try to get a feel for Pullman. So that whole team came in here invested. We knew the crowds would show up. 30,000? I don't know if I knew that many would show up, but it was a day to behold. It's just another reminder when Cougs do something and they do it unified, they do it pretty special and pretty loud. That was the day I tell everyone the second at 6 AM Pacific Coast Time, that was literally the last moment where the country found out exactly how much Washington State loves this institution. I know it was 15 years in the making to get to that point, but I would argue it was probably well worth the wait. That's the power of sports. We hope that every undergrad and grad student and faculty and staff look back and say our best day on this campus was October 20, 2018. It was the day that GameDay came to Washington State, and it was the day that the country found out exactly how amazing it is to be a Coug.

Q: Football obviously is king in an athletic department. Having solid footing in a football program right now, in your first year, how important is that?

A: I tell everyone, in my role, the two most important things are leadership and football in terms of what you can do in the early stages of your tenure as athletic director, and we're blessed at Washington State. I work for the best president in the country in Kirk Shultz, and we have one of the most stable football programs in the country under Coach Leach. I mean, he was Pac-12 Coach of the Year, the FCA National Head Coach of the Year. What he does with his program is really nothing short of amazing. But when you study Mike Leach, this is who he is. He's got a growth mindset. He's a lifelong learner. He takes programs and he puts them on this journey of how do you get better every single day. So it's a joy to be a part of it. It's really fun to watch a future Hall of Fame coach going to work, but from an athletic director, athletic department standpoint, to have leadership on this campus, to have the type of football program we have, allows us to really focus on the other things that we need to do right with our athletic program.

A: Our mindset is more about how can we be the best we're supposed to be. So I know we have conference rivals, we have regional rivals, and things like that, but our measure is always going to be ourselves. So our journey is simply how do we become the best version of Washington State that we're supposed to be on any given day? We know we have to continue to invest in our program. I think there was a direct correlation with our football success with the renovations in Martin Stadium, building this football operations building, and hiring an elite coach like Mike Leach.