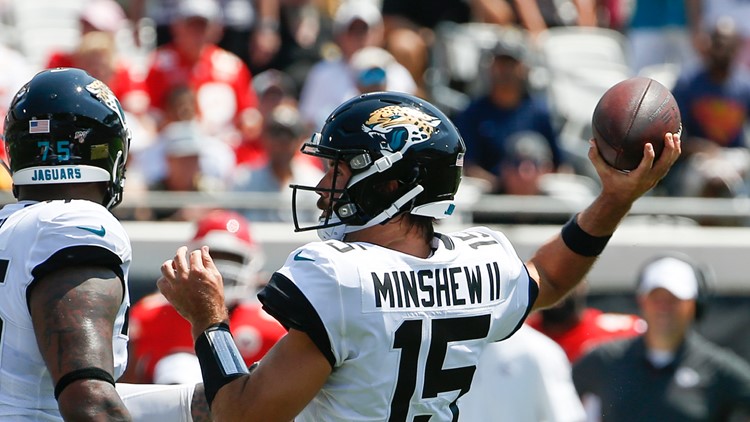 Photo by: AP
Jacksonville Jaguars quarterback Gardner Minshew (15) throws a pass against the Kansas City Chiefs during the first half of an NFL football game, Sunday, Sept. 8, 2019, in Jacksonville, Fla. (AP Photo/Stephen B. Morton)

Minshew replaced injured starter Nick Foles in the first quarter. In his first taste of NFL regular season action, Minshew completed his first 13 passes in a row. According to Elias Sports Bureau, that's the longest streak by a player to start their career over the last 40 years.

The former WSU standout would complete 22 of his 25 pass attempts for 275 yards in the loss. He also threw for two touchdowns and an interception.

According to ESPN's Adam Schefter, Foles broke his left clavicle. There has not been a timeline released for his return, so Minshew will likely remain the starter for the foreseeable future.

RELATED: What will WSU football's record be this season?

The following story is a report on Gardner Minshew getting drafted by the Jacksonville Jaguars with the fifth pick in the sixth round of the 2019 NFL Draft.