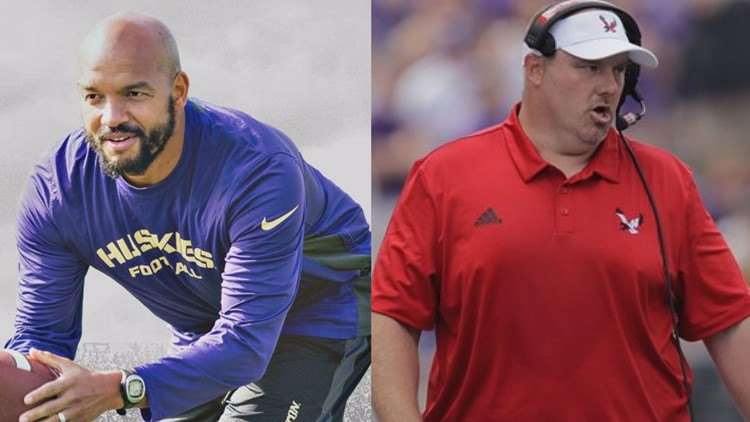 UW announced Monday that North Central and Eastern Washington alum Jimmy Lake will take over head coaching duties for the football program, but where he cut his teeth in the sport was around the Spokane area.

During his time at Eastern, Lake crossed paths with now Eastern Washington Head Coach Aaron Best in a variety of ways, including as a player and on coaching staffs.

“It surprised me in the fact that it was now and it was at the institution it was," Best said, reacting to the Lake news via a phone interview on Monday. "I anticipated Jimmy Lake being a head coach personality. He has a lot of characteristics of a head coach, but I thought it would come in the next year or two but extremely excited that it happens in Seattle."

Having experiences with both Lake as a player and as a coach gives Best a unique perspective on the newest man in charge of the Huskies.

“He’d smile at times, and then rip my face off at times as well,” said Best, remembering their brief time on the field together. “He was a Jekel and Hyde type of player, but that’s what makes him an awesome coach because he’s an overachiever. Coming from a North Central program that hasn’t been too successful over the years at football, getting an opportunity to play at Eastern, a late offer by Coach Kramer, coming in playing as a true freshman, a captain and all-league player by the time he left in 1998, speaks volumes as to what Jimmy gets out his daily preparation. He’s not necessarily the most talented player out there, but he gets a ton out of the talent he has.”

Lake finished his career at Eastern as an All-Big Sky honorable mention in 1998, and then moved on to be a student assistant at the program in 1999. The next season, he became the secondary coach at Eastern. Best finished up his playing career in the 1999 season, then was a student assistant in 2000, a graduate assistant in 2001, and finally was elevated to the offensive line coach in 2002. The two were both in official roles as on staff coaches during the 2002 and 2003 seasons before Lake left for UW.

As for Petersen stepping down, Best understands more than most how being a head coach is an everyday grind.

“I do know that in this day and age, coaching is not just coaching. There is relationship building, there’s recruiting, there’s more relationship building, there’s more recruiting. It truly is a 12 month job and when you talk about 12 months, it’s not just five days a week. I think at some point, everybody looks at it from an outsiders perspective and sees the word coach in front of someone’s last name and thinks, ‘Well, they just practice a couple hours a day and play on Saturdays.’ There’s more to the story than that, especially at that level, at an elite program that he’s brought it back to,” said Best of Petersen’s decision.

Best has also been witness to what some would describe as Lake’s fiery personality.

In particular, Lake hasn’t been afraid to call out WSU’s Mike Leach over the years. After last year’s Apple Cup, the then UW defensive coordinator said he hoped Leach stayed at WSU for a long time citing that it was easy to prepare for games against the Cougs because Leach’s game plan on offense stays the same.

Best doesn’t see Lake's personality changing once the title of head coach is next to his name.

“We are who we are. It’s made him who he is. Why change what’s worked? I don’t think you should change much when you believe in something so vividly and so strongly. Is it wrong that you make those sentiments public? If you’re around Jimmy around 15 minutes you know what you’re going to expect out of him and it’s honesty. It’s a very transparent approach. It’s gotten him to where at, so why change what’s got you to where you’re at?”

Lake now takes over the most prolific college football program in the state of Washington, but his roots will always be on the east side, and specifically, at Eastern.

“It is cool to be able to boast that there is an Eagle who’s steering that ship over in Seattle,” said Best. “When something hits so fast and so furious, you almost have to step back and take some time, catch your breath, and realize what just took place, but obviously it’s something. To be able to say I can call the head coach at the University of Washington and he’ll answer my phone call? Not too many people will in this world. He’s earned it every step of the way. He’s one of the greater humans out there. Very task oriented, very competitive, and knows what he’s after and knows how to get it.”

Best has seen that first hand.

“He’s put himself in his position. He’s prepared himself this way. It didn’t start a couple years ago, it started 20 years ago when he got into this profession. He’s always wanted to be the best at whatever he does and here’s a new challenge as a head coach to be the best at something he’s never been. I’ve got the upmost respect and applause for Coach Lake. He’s a man with a great future.”