NBA great Kobe Bryant and one of his four children died Sunday in a helicopter crash that killed 9 people, according to reports by multiple media outlets. 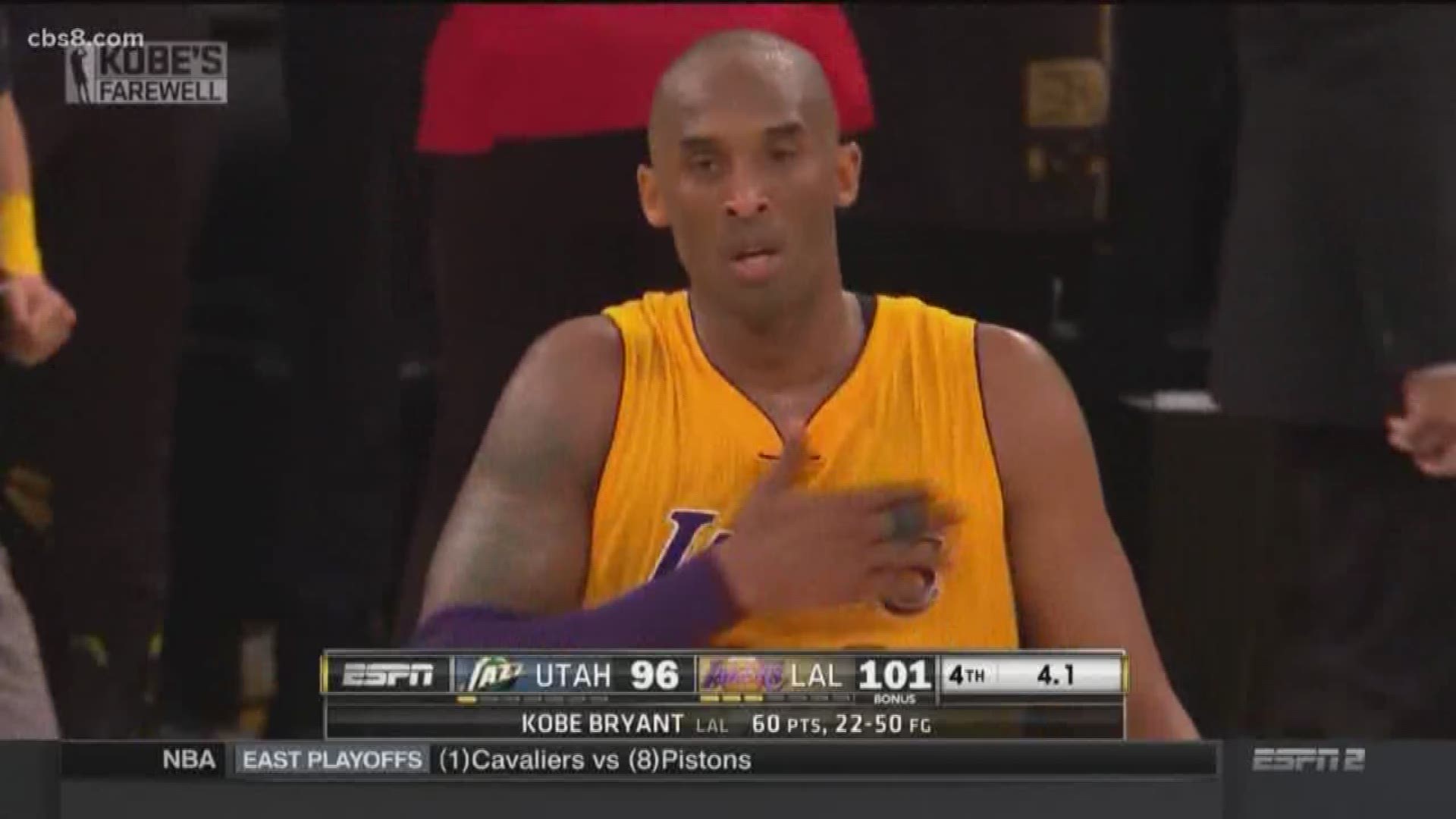 CALABASAS, Calif. — NBA great Kobe Bryant and one of his four children died Sunday in a helicopter crash, according to reports by multiple media outlets. The crash killed a total of nine people, including the pilot, according to the Los Angeles County Sheriff's Office.

The Los Angeles County Fire Department says the crash occurred in Calabasas, around 9:47 a.m. about 30 miles northwest of downtown Los Angeles. There were no survivors, according to sheriff's officials, who added that the crash triggered a small fire that was quickly put out.

The Lost Hills Sheriff station hosted a press conference at 8 p.m. on Sunday. The coroner has not officially identified any of the remains but plans to:

The pilot has been unofficially identified as Ara Zobayan, an instrument-rated pilot --meaning he was qualified to fly in fog -- according to records. Friends mourned him on social media Sunday night.

The Los Angeles County Sheriff's Department said a flight manifest on the helicopter indicated there were nine people on the helicopter when it went down. The helicopter took off from John Wayne Airport in Orange County at 9:06 a.m., records show. The crash occurred in foggy conditions.

RELATED: Michael Jordan reacts to Kobe Bryant's death: 'He was like a little brother to me'

Kobe Bryant was 41 years old. Bryant and his 13-year-old daughter Gianna were among those killed. According to ESPN, the two were traveling to a basketball game with another player and parent when the crash happened.

Bryant married his wife Vanessa in 2001 and the two shared four daughters including one born in June 2019. As of Sunday night, there was no word on where Vanessa Bryant or the other three girls were at the time of the crash.

Los Angeles officials held a press conference Sunday afternoon to give details on the crash. The department had earlier reported five people were killed in the crash - during the press conference they updated the number to nine people including the pilot. Authorities said they would not be identifying any of the victims until a coroner could confirm and next of kin could be notified.

The sheriff's department also reported that Federal Aviation Administration officials were on the scene of the crash Sunday afternoon and an investigation into the cause was underway.

The Los Angeles Police Department had grounded its helicopter fleet Sunday morning due to the foggy conditions and didn't fly until the afternoon, LAPD spokesman Josh Rubenstein said. The fog "was enough that we were not flying,'' he said.

The department's flight minimums require 2 miles of visibility and an 800-foot cloud ceiling, he said. When conditions allow, the LAPD typically flies two helicopters -- in the San Fernando Valley, the other in the Los Angeles Basin, he said.

Eighteen members of the National Transportation Safety Board were also heading to the scene where the helicopter crashed. The helicopter was identified as a twin-engine Sikorsky S-76.

NTSB member Jennifer Homendy said that investigators will look at the pilot's history, the maintenance records and information on the helicopter's owner and operator.

Homendy said investigators were not sure how many people the aircraft was configured to carry.

"We extend our sincerest condolences to all those affected by today's Sikorsky S-76B accident in Calabasas, California. We have been in contact with the NTSB and stand ready to provide assistance and support to the investigative authorities and our customer."

RELATED: President Trump reacts to death of Kobe Bryant: 'He was just getting started in life'

Bryant was a mega-star in NBA history, considered among the sport’s all-time greats. He spent his entire 20-year career with the Los Angeles Lakers. Bryant was selected 13th overall in the 1996 Draft out of Lower Merion High School in the Philadelphia area.

The 18-time All-Star won five NBA titles with the Lakers and was the league’s 2008 MVP. He also earned two Olympic gold medals on Team USA.

RELATED: Celebrities, athletes and politicians react to the death of Kobe Bryant

The crash came a day after Laker LeBron James passed him on the league’s career scoring list. Bryant is now fourth with 33,643 points. He retired in 2016 after a farewell tour season, dropping 60 points in his last game.

Bryant won an Oscar in 2018 for his animated short "Dear Basketball."

“We are deeply saddened by the passing of basketball great, Kobe Bryant. We had the honor of hosting him for our annual pre-season Los Angeles Lakers games at Pechanga Arena San Diego since his start in the NBA in 1996. He will be missed greatly and we send our condolences to his family, friends and the entire Los Angels Lakers organization."

As the news spread, Lakers fans began gathering outside Staples Center, prompting the Los Angeles Police Department to remind the public that "the area around the Staples Center is closed due to the Grammys & fans will not be able to access the arena."

Credit: AP
Fans of Kobe Bryant mourn at a memorial to him in front of Staples Center, home of the Los Angeles Lakers, after word of the Lakers star's death in a helicopter crash, in downtown Los Angeles Sunday, Jan. 26, 2020. (AP Photo/Matt Hartman) 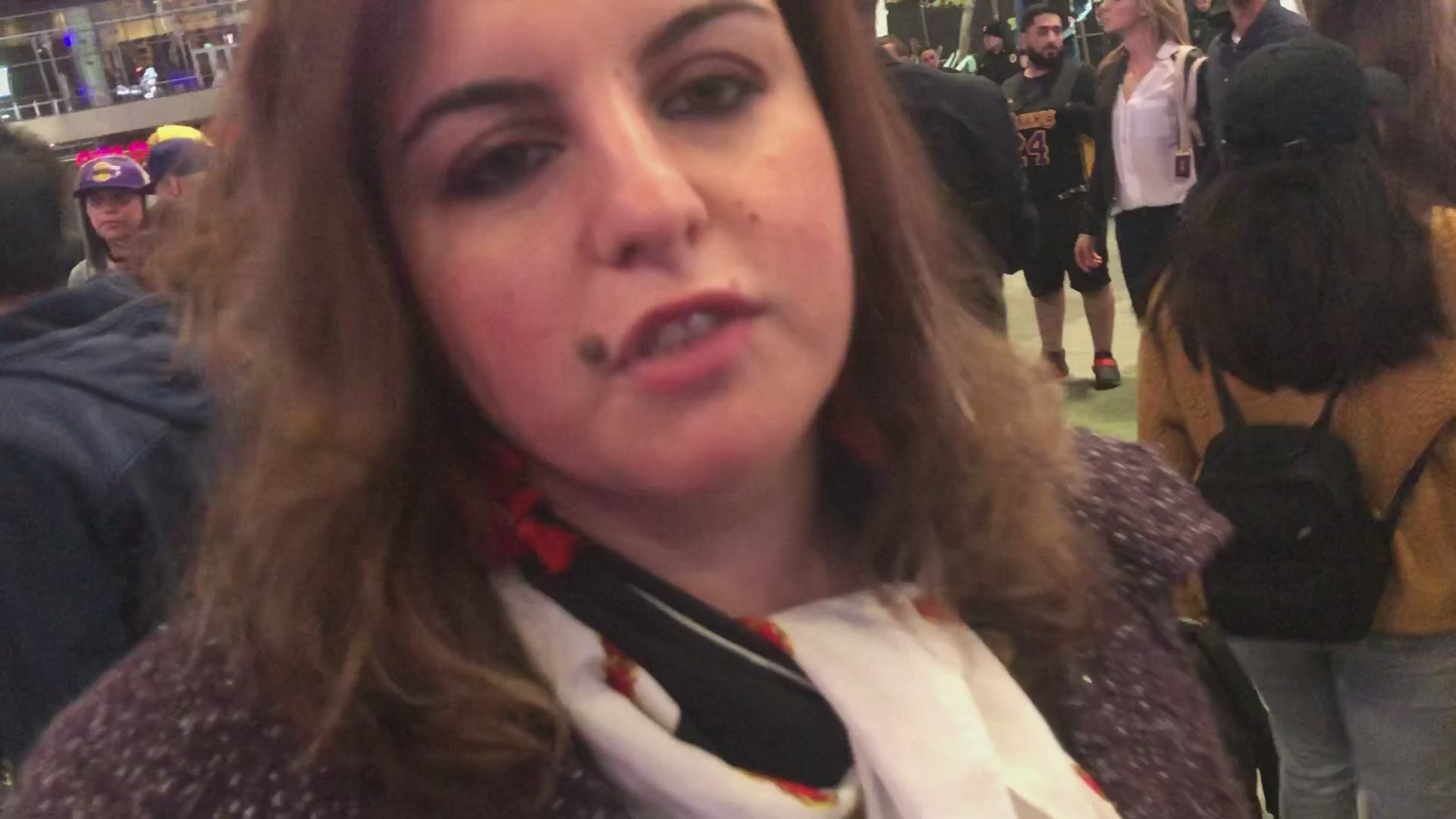 Fans gathered at other locations across Southern California on Sunday to remember Bryant. Outside the Mamba Sports Academy in Thousand Oaks, mourners left flowers and notes at a growing memorial.

A memorial also sprang up at De Anza Park in Calabasas with flowers and remembrances of #24.

People gathered in Calabasas on Las Virgenes Road near the scene of the deadly crash to pay their respects on Sunday as well. 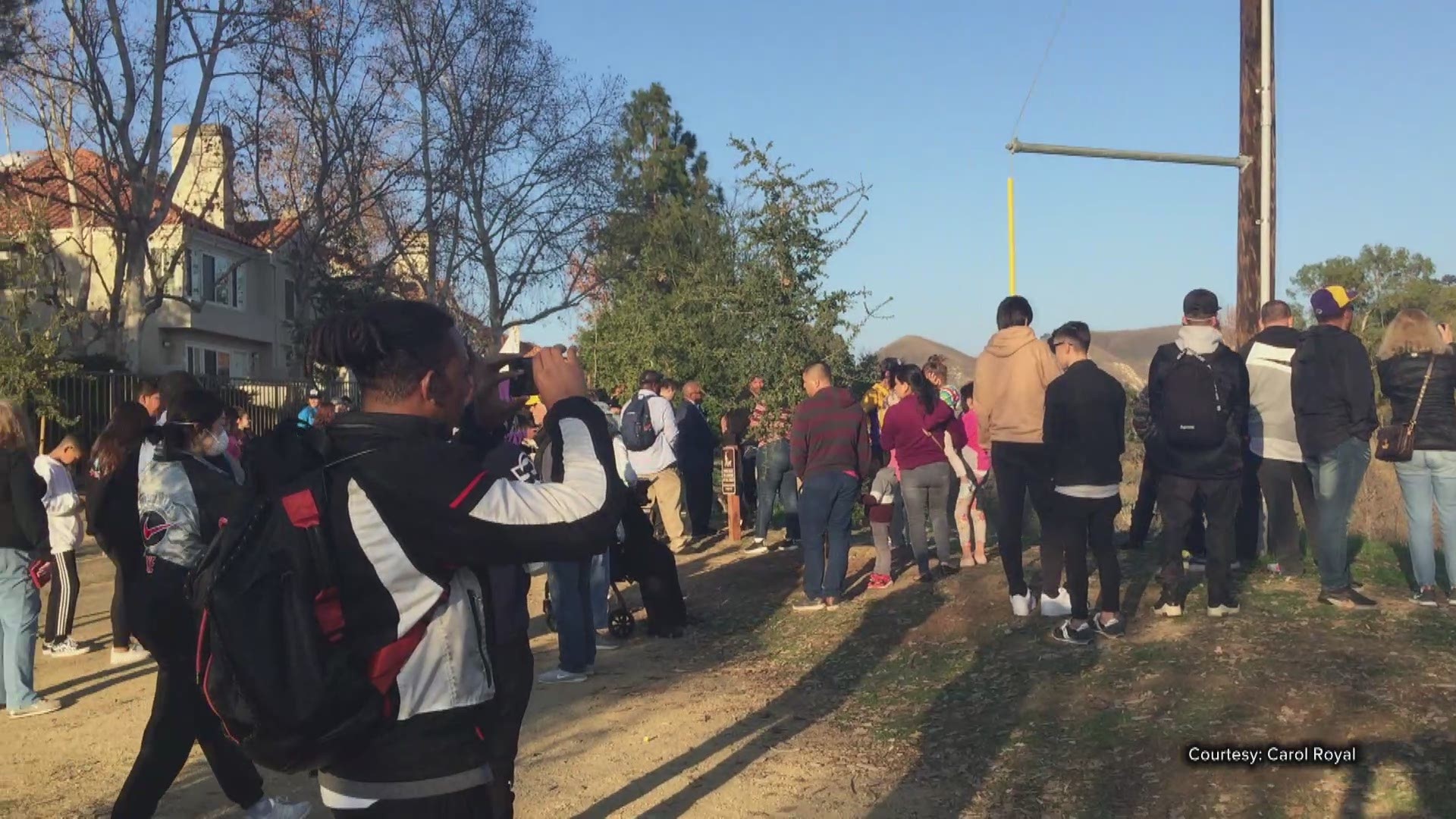 Orange Coast College in Costa Mesa confirmed that head baseball coach John Altobelli was one of the victims.

"It is with the heaviest of hearts that we announce the passing of Orange Coast College head baseball coach John Altobelli," the college said. "He was a coach, a colleague, a mentor and a friend at OCC for 27 years."

"John meant so much to not only Orange Coast College, but to baseball," OCC Athletic Director Jason Kehler said. "He truly personified what it means to be a baseball coach. The passion that he put into the game, but more importantly his athletes, was second to none -- he treated them like family. Our deepest condolences go out to the Altobelli family during this time of tragedy."

News of Bryant's death spread quickly on social media with basketball players, celebrities, and others sharing their thoughts on the former player.

Here are some of the many highlights of Kobe Bryant’s career: