The Trail Blazers' new TV partner, ROOT Sports, is not available on most online streaming services and was also cut from DISH Network's lineup. 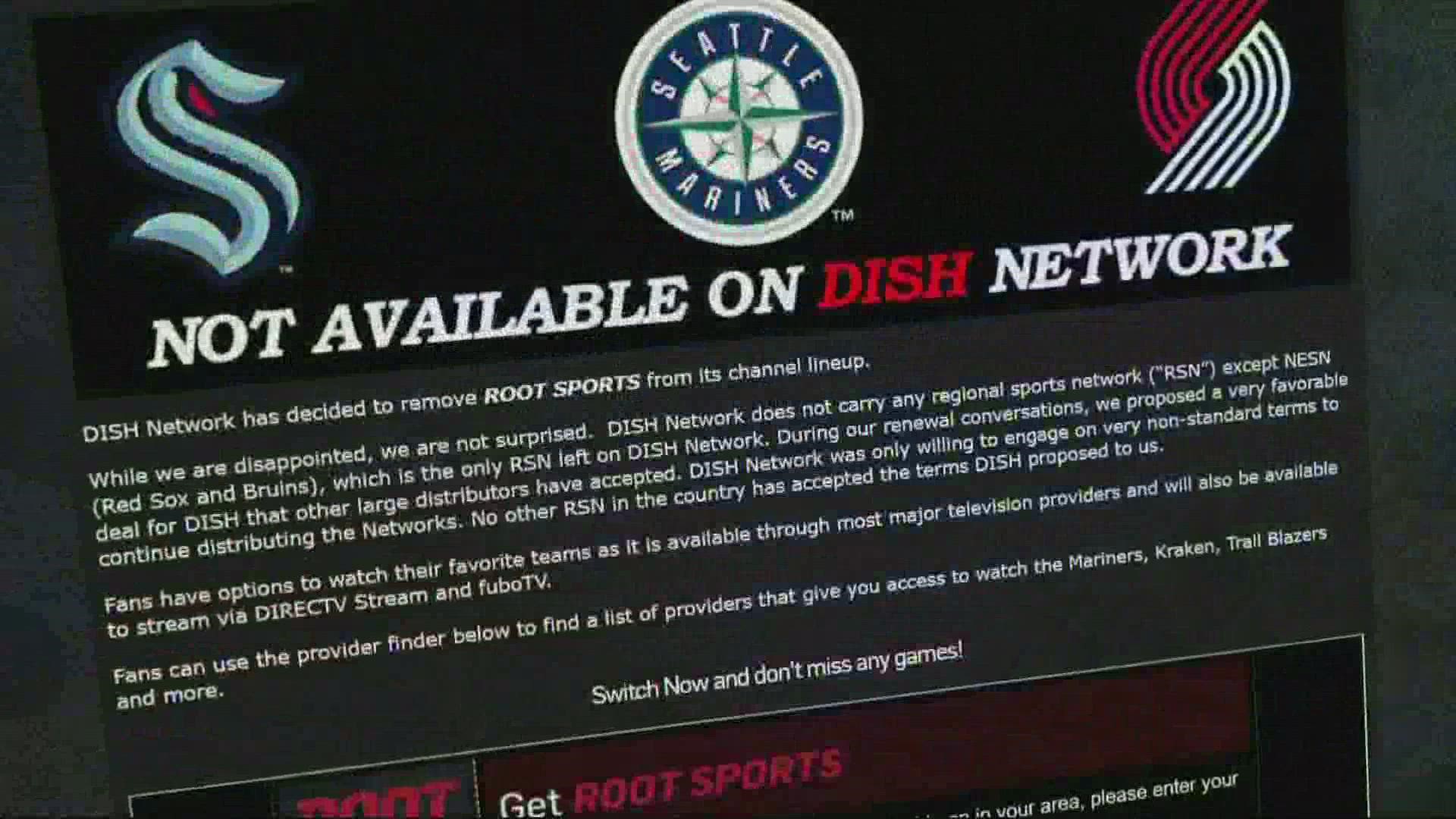 PORTLAND, Ore. — In June, the Portland Trail Blazers announced that the team had signed a multi-year deal to partner with ROOT Sports to broadcast their games. The partnership ended a 14-year relationship with NBC Sports Northwest, the previous television home of the Blazers.

The deal was hyped as a move that would bring the Blazers broadcast into more homes. But ask fans who watch on DISH Network or a variety of popular streaming services and they'll tell you that's not the case.

"They're not on YouTube TV, they're not on Hulu, the big service providers," explained Mike Richman, host of the "Locked on Blazers" podcast. "They're on some small secondary streaming services like Fubo, they've reached an agreement, but they haven't started broadcasting the games."

The Blazers have touted the partnership with ROOT as a way to bring in fans across the Pacific Northwest. The network has a long-established presence in the Seattle area.

"In some ways, the Blazers want to tell you it's easier. Root Sports wants to tell you its easier," said Mike Richman. "They have a larger footprint, but I don't know if that footprint changes too much in Portland specifically."

Before the Trail Blazers' pre-season opener against the Golden State Warriors Monday night, fans were firing back at a Blazers tweet, asking the team to make the game more widely available.

Ah yea, I had almost forgot you guys made this unwatchable for a lot of Blazers fans by moving to some channel a lot of us don't even have...

ROOT Sports Northwest is available on Comcast cable, CenturyLink and DirectTV, but was cut by DISH Network a few days prior to the Blazers game.

“The current RSN (regional sports network) model is fundamentally broken,” said Brian Neylon, group president of DISH TV, in a statement provided to KGW. “This model requires nearly all customers to pay for RSNs when only a small percentage of customers actually watch them.”

ROOT Sports Northwest posted on their website, saying in part, "During our renewal conversations, we proposed a very favorable deal for DISH that other large distributors have accepted. DISH Network was only willing to engage on very non-standard terms to continue distributing the Networks. No other RSN in the country has accepted the terms DISH proposed to us."

Watching Trail Blazer games on NBA League Pass, a subscription streaming service, is not an option because the games are blacked out in the Portland area.

For some fans, paying for another streaming option is not in the budget. Fubo plans, for example, start at $64.99 per month.

Blazers fans have been here before. In 2007 when the Blazers signed a TV deal with Comcast SportsNet, which later became NBC Sports Northwest, the only way to watch the game was on cable. Comcast SportsNet wasn't available anywhere else at the time. Fans launched a grassroots effort to put pressure on the Trail Blazers to make their games more accessible.

In 2007, Blazers fan Chuck Cushman, who was head of the grassroots organization Blazer Fan Access Coalition, said, "We're trying to get people to call the advertisers and let them know they're upset...to get them to call the Blazers, because we think the Blazers can exert pressure on Comcast. We'll send them an email every week, every week, or more."

RELATED: Fans of Trail Blazers and Winterhawks have big day in Rose Quarter

Richman says the Blazers are going to be a good team this year — a team you may want to watch, if you can find them.

"They're gonna be good. How good is going to be the question. I don't think this is a championship level team."

You can listen to the Locked On Blazers podcast wherever you download your podcast or find them on YouTube. Locked On is owned by the parent company of KGW.