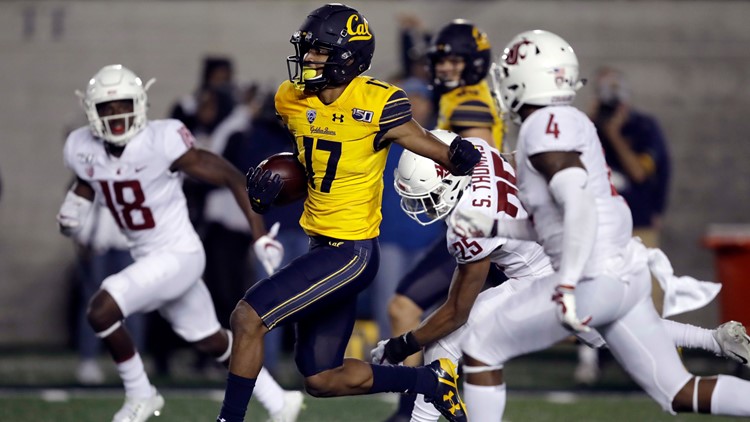 Photo by: AP
California's Makai Polk (17) evades the tackle of Washington State's Skyler Thomas (25) on his touchdown run in the second half of an NCAA college football game Saturday, Nov. 9, 2019, in Berkeley, Calif. (AP Photo/Ben Margot)

Modster has 4 touchdowns in return, Cal holds off WSU 33-20

BERKELEY, Calif. — Devon Modster passed for a career-high three touchdowns and rushed for a fourth in his first game back from injury, California's defense made a pivotal stop late in the fourth quarter, and the Golden Bears beat the Cougars 33-20 on Saturday night to end a four-game losing streak.

The win keeps California on track to become bowl eligible for the third time in three seasons under coach Justin Wilcox.

Washington State quarterback Anthony Gordon was 45 of 58 for 407 yards passing and threw two touchdown passes and one interception. Gordon, who entered the day leading the nation in passing yards and touchdowns, completed 19 consecutive throws during one stretch to help make up for a rocky start when his first throw of the night was picked off.

Modster did not play in Cal's 35-0 loss to No. 8 Utah on Oct. 26 but was cleared earlier this week. He completed 16 of 24 passes for 230 yards and had a pivotal 26-yard scramble prior to his 52-yard touchdown pass to Makai Polk. Modster also had scoring throws of 9 and 13 yards, then sealed the game with a 13-yard touchdown run in the fourth quarter.

Washington State: The Cougars were comfortable throwing the majority of the time, which made it easier for the Bears to defend. Gordon was sharp most of the game and found a nice rhythm with wide receiver Brandon Arconado (12 catches, 130 yards, one touchdown). Washington State still has a shot at a postseason bowl but cannot afford another loss.